skip to main content
Return to Fordham University
You are at:Home»Fordham Magazine»Alumni News»Young Alumni Serve through the Jesuit Volunteer Corps
Above (from left): Alyssa Melendez, Elaine Danielczyk, Cara McClane, Mark Espina, Emily Tormey, and Carolyn Ambrosich joined JVC Northwest this year.
St. Ignatius Loyola, the 16th-century founder of the Jeuits, once wrote that “love ought to manifest itself in deeds and not words.” This year, 19 recent Fordham graduates have taken his words to heart and joined the Jesuit Volunteer Corps (JVC) and JVC Northwest.

Through the two organizations, these alumni have been placed in one- to two-year positions in nonprofit and community resource organizations like schools, faith-based centers, food banks, and homeless shelters, where they work directly with the local population to address myriad social, educational, and environmental concerns. It’s this immediacy that past Fordham volunteers say creates such a strong bond between Jesuit Volunteers (JVs) and the local community.

“Our JVs are fully committed to living intentionally and authentically in relationship with those on the margins of society,” says Tim Shriver, president of JVC.

Each year, members of the Fordham community complete more than 1 million hours of volunteer work in New York City and throughout the world—a commitment recognized earlier this year by Washington Monthly, which ranked the University No. 28 in the country in service, educating students who give back to society. Besides JVC, Fordham alumni are also strongly represented in the Peace Corps, with 15 alumni currently serving worldwide and a total of 446 having served in the Corps since it was founded in 1961. 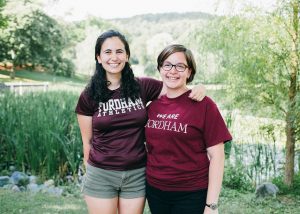 The alumni now serving as Jesuit Volunteers majored in various subjects at Fordham, including mathematics, English, psychology, environmental policy, philosophy, and humanitarian studies. But despite their diverse interests, they all share the same drive for creating positive change.

Since 1977, 220 Fordham alumni have served with JVC. Here is a complete list of Fordham graduates who are beginning their service as Jesuit Volunteers this year: