skip to main content
Return to Fordham University
You are at:Home»Fordham Magazine»Alumni News»Wrestling Her Way to the Top: Betty Gilpin, Star of the Netflix Series GLOW
Betty Gilpin and Alison Brie as their wrestling alter egos in GLOW. Photo courtesy of Netflix
In the second episode of the hit Netflix series GLOW, Debbie Eagan expresses her frustration with the way the acting industry treats women. “If you wanna do something more than nod and eat a salad, and make a pretty cry-face, you are punished,” she says.

It’s something that Betty Gilpin, FCLC ’08, the Fordham Theatre graduate who plays Debbie, might have said herself. 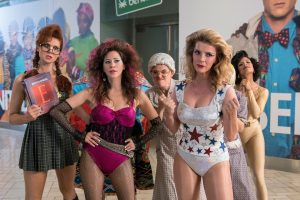 Gilpin and some of her fellow Gorgeous Ladies of Wrestling in a scene from the second season. Photo by Erica Parise, courtesy of Netflix

When she was last on the Lincoln Center campus, in April 2016, Gilpin told a group of Fordham Theatre seniors about the struggles of auditioning for acting roles. “Especially as a woman, it’s totally different. You’re going to be told things like, ‘Don’t make that weird face when you cry,’ or, ‘Great, just wear more makeup next time,’” she said. She emphasized how her Fordham training, which created an atmosphere of camaraderie and taught her to focus on her love of the craft, keeps her grounded and motivated.

Now Gilpin stars alongside Alison Brie in the comedy about the Gorgeous Ladies of Wrestling, or GLOW, the short-lived women’s professional wrestling circuit founded in 1986. The New York Times has called the Netflix series, a fictionalized account of 1980s show, “a high-flying leap off the top rope, a summer treat with spandex armor and a pulsating neon heart.”

And Gilpin has been able to share her experiences and advice with a wider audience through magazine interviews, TV appearances, and even an essay in Glamour, where she discusses gaining both confidence and physical strength through her new role.

“GLOW was the first set I’d been on run by women,” Gilpin writes. “It was a magical never-never land run by type-A amazons. I saw power and care together for the first time.”

Season two of GLOW will be released on Netflix on June 29.

In the meantime, watch the trailer to see Gilpin’s character Debbie transform into her wrestling persona—Liberty Belle—about 45 seconds into the GLOW girls’ neon-fueled ’80s dance party.