skip to main content
Return to Fordham University
You are at:Home»Fordham Magazine»Alumni News»Women’s Athletics Panel Offers Career Advice, Insight to Student-Athletes
Stephanie Gaitley, head coach of Fordham women’s basketball, speaks as a part of a panel for women student-athletes. Photos by Dana Maxson
Danielle Padovano, FCRH ’16, GABELLI ’17, had played sports since she was 6 years old, including four years as a member of the Fordham women’s basketball team. When her college career ended, she had to face a challenging transition.

“That was the first time I realized that I was no longer defined as an athlete—obviously, a student–athlete when I was here, but I think at the core it was always kind of where my heart was, and where I felt most comfortable was on the basketball court,” she said. “It is a big shock, it’s a big change when you don’t have to wake up for 7 a.m. practice and you are on your own and you have to figure out your own schedule and what that means.” 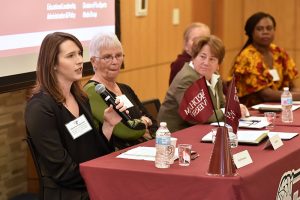 Padovano, who earned two degrees in four years at Fordham—a B.A. in communication and media studies and an M.S. in media management—is now a sales and business operations manager at Home Team Sports, a division of Fox Sports Media Group. She told her story to a group of more than 100 current Fordham student–athletes on Monday, Nov. 4, in Bepler Commons as a member of the first Women’s Athletics Panel.

Annette McLaughlin, the director of career services at Fordham asks panelists about their career paths.

The idea for the panel was born out of Fordham’s Women’s Philanthropy Summit, an annual community–building and networking event at the Lincoln Center campus. Gaitley had participated in the 2018 summit and was inspired to put together a similar event specifically for student–athletes at Fordham.

The goal was to give the women an opportunity to meet and learn from former athletes who have made their way in various fields.

Waite said the path to a rewarding career is not always straight. She told the student–athletes that her plans changed dramatically after she tore her ACL one week before she was supposed to meet with the volleyball coach about her plans to play at the collegiate level.

“You might start off thinking that your life is going to go one way, and it [could wind up being]completely different,” she said. “I could have sworn that I was going to go to the Olympics, right? I was gonna play volleyball on the national Olympics team, and it didn’t quite happen like that.”

Waite considered pursuing a career as a lawyer, but instead decided to apply to the New York City Teaching Fellows program. 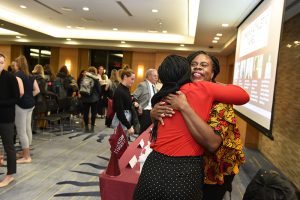 Shannon Waite, Ed.D., GSE ’05, ’15, a clinical assistant professor at Fordham’s Graduate School of Education, hugs one of the student–athletes in attendance at the Nov. 4 panel.

“When I was teaching, it became very clear to me that what I was doing was a part of my calling,” she said.

Waite progressed from classroom teacher to dean of students, and later held several administrative positions at the New York City Department of Education while earning a doctorate at Fordham, where she now works to train principals and other aspiring school leaders. Since March 2018, she has served on the city’s education oversight board, the Panel for Educational Policy.

“I talk a lot and I teach a lot about equity. I teach about race,” she said. “I get the privilege of answering the call of my life, which is to change the conversation about race in the country through the lens of education, to make race no longer a dirty four-letter word, to be able to talk … about things that are uncomfortable and [make]people very, very comfortable.”

Being the Only Woman in the Room 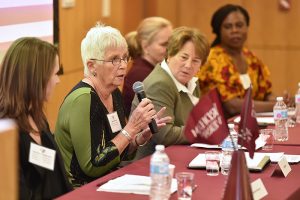 Former Dartmouth Athletic Director Josie Harper shares what it was like to be the first woman to hold that role.

Harper spoke about her experience as the first woman to serve as athletics director at Dartmouth and in the Ivy League as a whole. She acknowledged that more doors are open for women today than there were in 2002, when she was appointed to the position, but she still urged the students to learn some skills to deal with challenges associated with being the only woman in the room.

“The one thing I found was humor—you get in an uncomfortable situation, and you kind of look at your audience and you use humor,” she said.

She recalled using it when she had to meet with male Dartmouth alumni for the first time.

“One of the things I said when I went into the room was, ‘This is incredible. I am finally the best-looking woman in the room,’” Harper said with a laugh. “They were sitting there (and I said), ‘Look guys, I know what you’re thinking, the football program isn’t winning, now we have a woman AD.’ I basically said, ‘Here’s the deal: As long as I don’t call [plays on]third and 10, I think we’ll be fine.’”

Incorporating Athletics Off the Field

Fry, a decorated marathon swimmer, said her sport continues to be a factor in many areas of her life, including her volunteer work. 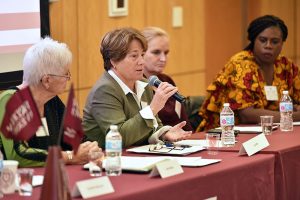 For more than five years, she has been the marathon director for Swim Across the Sound, an annual fundraiser for St. Vincent’s Medical Center in Bridgeport, Connecticut. The event aims to raise money to offer cancer prevention education and screenings to the community and provide financial support for people affected by the disease.

“That’s a very important part of my life as well, that I’ve been able to take my swimming and then use that for good and give back as service,” she said. “I encourage all of you after you leave the University to stay involved in sports, to stay involved in your community with sports.”

Gigi Speer, a Fordham College at Rose Hill sophomore, said hearing the women’s stories inspired her to seek out a mentor.

“I want to be friends with everyone on the panel,” said Speer, an outfielder on the softball team who plans to major in Italian Studies. “I think it’s really inspirational to see older women and hear their stories and learn from them. It makes me want to find someone like that to talk to.” 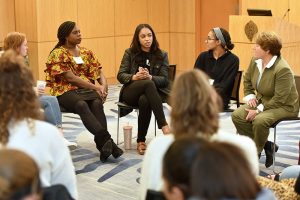 Students had the chance to meet with the panelists and members of career services after the discussion was over.

Annette McLaughlin, the director of career services at Fordham, moderated the hourlong panel discussion. She also facilitated three breakout discussions—one for first-year students, one for sophomores and juniors, and one for seniors. Members of the career services department discussed interview skills and talked with the groups about ways to overcome certain tendencies, such as acting shy or not having a firm handshake, while Fry, Gaitley, and Waite provided more in-depth life and career advice to the seniors.

Rachel Hubertus, a Fordham College at Rose Hill junior who plays softball and is majoring in digital technologies and emerging media, said she walked away from the event with a better understanding of why it’s important to surround herself with positive influences to be successful.

“It’s going to take time and effort, but it’s definitely possible with the right people around you and the right work ethic,” she said.