skip to main content
Return to Fordham University
You are at:Home»Fordham Magazine»Features»With Fundraising Drive and Muster Campaign, Fordham Military Community Kicks Off 175th Anniversary Celebration
Student veterans, ROTC cadets, alumni, administrators, and others gathered in Bepler Commons at the Rose Hill campus for the first event marking the 175th anniversary of military training at Fordham. Photo by Dana Maxson
At its annual Hall of Fame induction ceremony, the leaders of Fordham’s ROTC and student-veteran programs announced a yearlong celebration of an upcoming milestone: the 175th anniversary of military training at Fordham, which began just seven years after Fordham was founded by an Irish immigrant to provide opportunity to other immigrants and their descendants.

Tradition holds that Fordham’s military heritage dates from 1848, when the state of New York issued Fordham 12 muskets for defense against the threat of nativist rioters, noted Lt. Col. Paul Tanghe, Ph.D., professor of military science at Fordham, at the Nov. 6 event at the Rose Hill campus. Today, the University is home to a military service community comprising “one of the most diverse [ROTC] cadet battalions in the Northeast” and more than 400 students who are veterans, he said, noting the University’s reputation for being welcoming to them.

“The military-connected community is one of the things that makes Fordham special,” he said. “This is a community that’s built around individual paths of service coming together in one place.”

Efforts to honor, support, and grow that community will be part of the yearlong anniversary celebration. 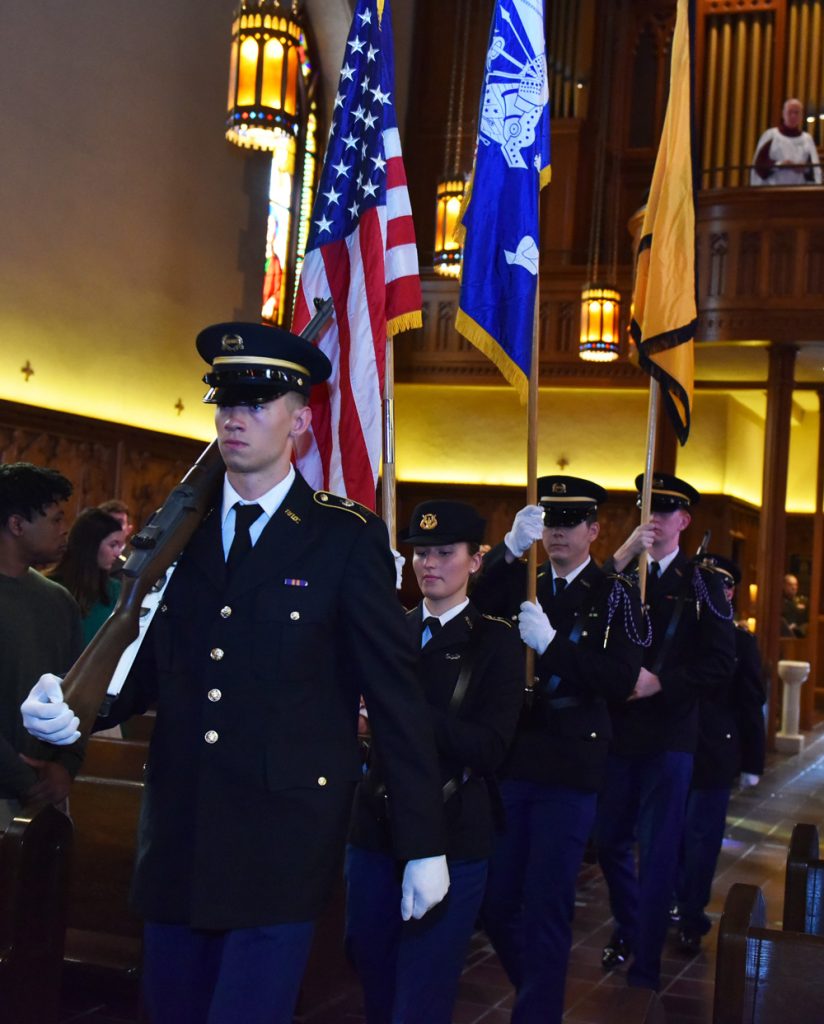 Cadets formed a color guard in a Mass at the University Church that preceded the 175th anniversary kickoff. Photo by Dana Maxson

The Office of Military and Veterans’ Services and the Department of Military Science will host two events per month from January through November, with each month’s events organized around a chapter of military history at Fordham. January’s events include a service project—in partnership with Campus Ministry—related to welcoming immigrants, harking back to the origins of Fordham’s military training in 1848. Events in later months will commemorate the Civil War, Vietnam War, World War I, and other epochs, culminating in a gala to be held in November 2023.

There is also a “military muster” outreach effort to Fordham’s military community—ROTC graduates, student and alumni veterans, faculty and staff who served, and friends and family of Fordham veterans—to reengage them with the University. In addition, the veterans’ services office will lead an effort to raise $4.2 million to support ROTC cadets and student veterans as part of Cura Personalis | For Every Fordham Student, the University’s $350 million fundraising campaign.

The veterans’ services campaign received some impromptu support at the Nov. 6 event, which celebrated two distinguished alumni veterans as well as the ROTC program and student-veteran community at Fordham.

Two Who Served with Valor 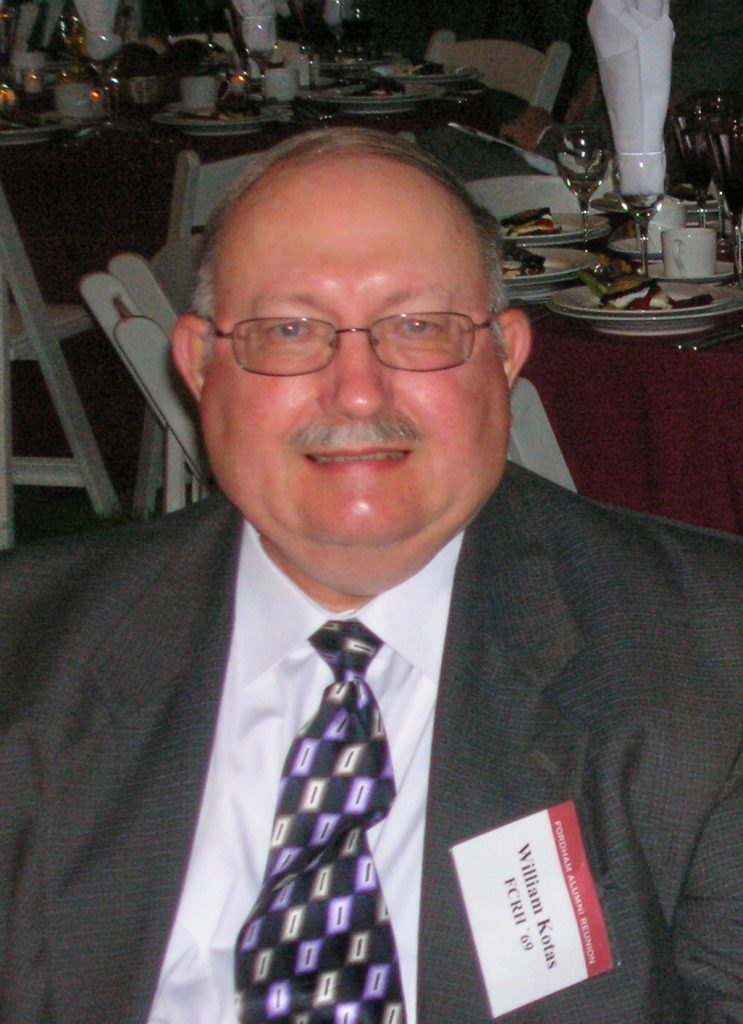 Kotas, who died last year, served as a platoon leader with the 23rd Infantry Division. He was inducted in honor of “the way that he approached all of his duties and obligations to others in his life,” from his cadet years to his post-Army life, Tanghe said.

“His military service was shorter than he wanted it to be because of the manner in which he approached it”—that is, with devotion to the soldiers under his command, Tanghe said.

In a display of that devotion, he personally led a patrol during which he suffered grievous injuries that would require a year of hospitalization and medical retirement from the Army. At the time of his injury, he continued to lead his men and directed them to safety. Kotas received multiple military honors, including the National Defense Service Medal, the Parachute Badge, and the Bronze Star Medal with the “V” device to denote heroism.

Moving back to Nashville, Tennessee, “he continued to find a life of purpose and meaning,” Tanghe said. Kotas was a founding member of the St. Ignatius of Antioch Catholic Church in Nashville and taught in its adult education program on Sundays, among other community activities, and worked for the U.S. Postal Service until his retirement. 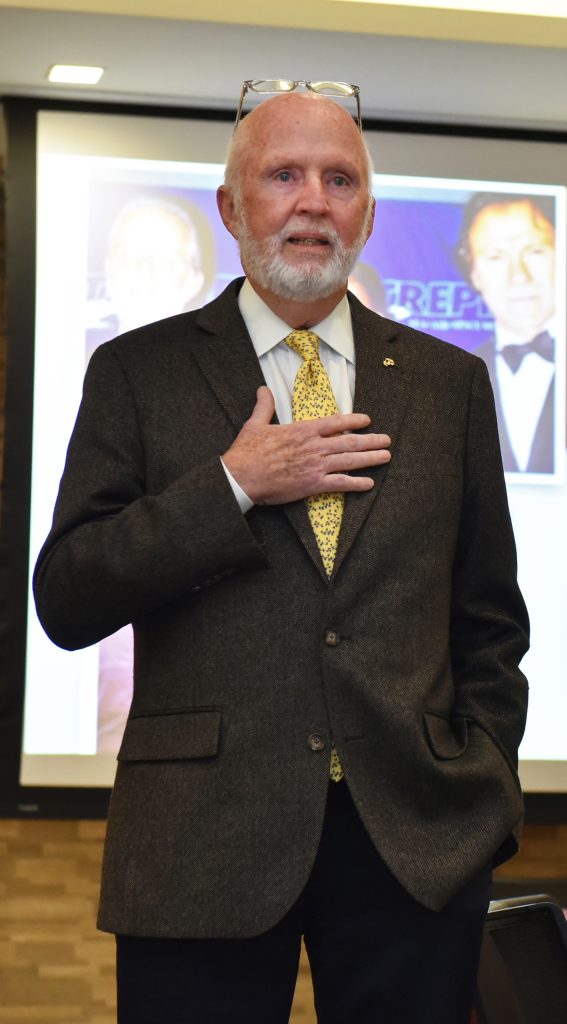 Byrne, a 1962 graduate of Fordham Preparatory School, was commissioned via the Marine Corps’ Platoon Leaders Class, which he attended while earning his degree from Fordham College at Rose Hill. He served on active duty from 1966 to 1969, including a tour in Vietnam spanning  the latter two years.

“What I learned at Fordham Prep and Fordham College from the Jesuits was ethics and integrity,” he told the gathering. “In the Marine Corps, I learned discipline and leadership. When you combine it, it’s amazing what you get out of it.”

Byrne has had a distinguished career in media, serving as launch publisher of Crain’s New York Business, creator and chairman of NBC’s Quill Awards, and publisher of Variety, leading its transformation into a diversified global media brand. Today he is vice chairman of Penske Media.

He has hosted a Marine Corps birthday celebration in New York City for the past 25 years, and in 2009, he received the Made in New York Award from then-mayor Michael Bloomberg.

Byrne serves on the boards of nonprofits too numerous to name, including the Intrepid Sea, Air & Space Museum. He learned the value of staying busy, he said, from the famed television producer Norman Lear, who, during a conversation about packed schedules, told him that “life is not a rehearsal.”

“When I go back and think about friends and fellow marines who don’t have the ability to stand here like I am, it’s very moving,” said Byrne, who attended the event with some friends from the Corps and his wife, Liz Daly Byrne.

He said he was “extraordinarily honored” to be inducted into the Hall of Fame “and to be a Fordham graduate, and to see … everyone who’s here today.”

The fundraising campaign announced at the event has three components:

Tanghe noted that the Emergency Relief Fund will provide microloans to help students who, for instance, might be unable to meet monthly living expenses on time, because their veterans’ benefit payments are held up by bureaucratic snafus. “If you’re missing a month of rent in New York City, that can be a significant financial burden,” Tanghe said at the Nov. 6 event.

Matthew Butler, PCS ’17, Fordham’s director of military and veterans’ services, said the fundraising effort has gotten off to a strong start, with one donor contributing $25,000 in mid-October.

During a follow-up meeting, the donor wrote another check, for $70,000, Butler said.

Asked later about his spontaneous decision to donate, he gave a simple reason.

“It’s supporting Fordham and veterans,” he said. “There’s no better reason than that.”

Register here to be connected with others in Fordham’s military-affiliated community.

To inquire about supporting the Office of Military and Veterans’ Services fundraising campaign, please contact Michael Boyd, senior associate vice president for development and university relations, at 212-636-6525 or mboyd7@fordham.edu. Learn more about Cura Personalis | For Every Fordham Student, a campaign to reinvest in every aspect of the Fordham student experience.