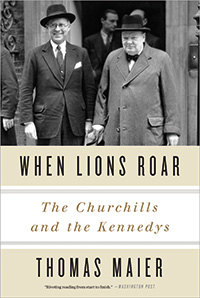 When Lions Roar: The Churchills and the Kennedys by Thomas Maier, FCRH ’78 (Broadway Books)

“In the twentieth century, no two families existed on a bigger world stage, epitomizing the Anglo-American ‘special relationship’ over four decades” than the Churchills and the Kennedys, writes Thomas Maier.

In When Lions Roar, he weaves together the intertwined histories of the two dynasties from the 1930s through the ’60s, skillfully managing a large cast of characters. The book is filled with lively anecdotes of war and espionage, adultery, the Vatican, and “so many of [the families’]private and political dealings.”

Maier, an investigative reporter at Newsday, also shines light on little-known connections. In October 1933, for example, Joseph P. Kennedy, looking to capitalize on the approaching end of Prohibition, travels to England and strikes a lucrative deal to import British liquor to America. Churchill, meanwhile, obtains stock in two U.S. companies directly tied to Kennedy in what seems, according to Maier, like a pay-to-play deal.

By the late 1930s, however, the Kennedy and Churchill, “once so friendly, now seemed at fateful loggerheads” on how to handle the rise of Nazi Germany. (Kennedy was an isolationist.) The families would become friendly again by the 1960s, Maier writes, “as if only they could understand one another, lifelong participants born into the political arena, with all the blood, brains, and passion that drives family dynasties from one generation to the next.”