skip to main content
Return to Fordham University
You are at:Home»Fordham Magazine»Features»‘What It Will Save Us’: MOSAIC Panel Addresses Environmental and Climate Justice

Fordham College at Lincoln Center graduate Marquetta L. Goodwine, Queen Quet of the Gullah/Geechee Nation, sang those lines from the spiritual “I’ve Been in the Storm Too Long” at the beginning of her presentation during an April 25 panel on environmental and climate justice. The event, held online, was sponsored by Fordham’s MOSAIC alumni affinity chapter and the Office of Alumni Relations. It featured alumni, faculty, and other experts who discussed how environmental and climate issues disproportionately affect certain populations—and how we can, both globally and locally, work toward lessening those impacts.

The lyrics Queen Quet sang also speak to the work she has been doing for more than two decades as chieftess of the Gullah/Geechee Nation, a sovereign people who live along the Atlantic coast from Pender County, North Carolina, to St. John’s County, Florida. On the low-lying land populated by the Gullah/Geechee, flooding has been a longstanding problem only heightened by the increasing number and severity of storms due to climate change.

As one of two keynote speakers, Queen Quet emphasized the importance of communicating about climate change in ways that are easily understandable to every community.

“It cannot be spoken of in terms of carbon emissions and CO2 and these types of things, because that is not everyday common vernacular throughout America,” Queen Quet said.

She also discussed some of the specific work the Gullah/Geechee Nation is doing to prepare for natural disasters caused by climate change, including building resiliency hubs to store supplies and solar power charging stations, which could also serve as an airdrop point for food and other necessities. And while her nation has already seen a great deal of damage from flooding and beach erosion, Queen Quet said that speaking at the U.N. Climate Change Conference in 2019 was an opportunity to share optimistic ideas with other leaders from around the world.

“We’re all trying to show each other living examples of what we’re doing where we are to make this world a better place, to try to heal it, try to reverse some of the impacts,” she said.

‘We Must Be Willing to Serve’

“Context matters,” he said. “The way you deliver your message is very important.”

Dr. Gbujie pointed to the ways that sub-Saharan Africa has already been devastated by climate change, from flooding in his native Nigeria to drought that has played a role in conflicts like the Sudanese Civil War, which in 2017 the U.N. World Food Program called “the first climate change conflict.”

As the founder of the Team 54 Project, a nonprofit organization with the goal of raising awareness about the impact of climate change and the need to take urgent global actions, Dr. Gbujie said that he has found inspiration in the mission of Jesuit education and the idea of cura personalis—care for the whole person—when thinking about how best to approach the climate crisis. 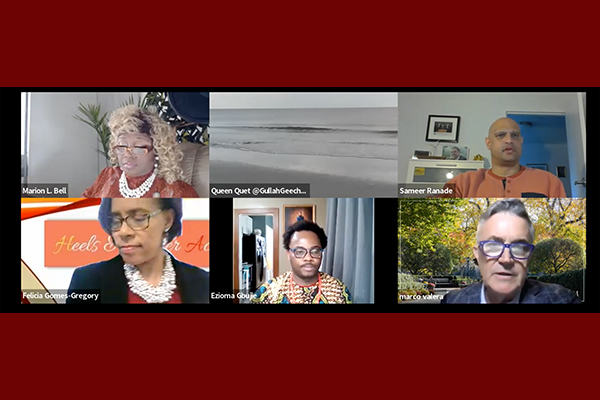 “For everything that we experience here,” he said, “there’s a level of empathy and sympathy we have to have. To resolve the climate crisis we have right now, we must be willing to serve. …

Along with the keynote speakers, the panel—which was moderated by Marion Bell, FCLC ’92, one of MOSAIC’s co-founders, with support from fellow chapter co-founders Felicia Gomes-Gregory, FCLC ’88, GSAS ’98,  and Marlene Taylor-Ponterotto, FCRH ’79—featured presentations from several speakers who discussed the infrastructural keys to adapting to and mitigating climate change, both at Fordham and beyond.

Using Infrastructure and Policy to Prepare for the Future

After opening the event with a prayer, Bell, who is also the chairperson for environmental and climate justice of the NAACP mid-Manhattan branch, introduced Marco Valera, vice president for administration at Fordham. Valera, who took on his current role in 2019 after serving as vice president for facilities management, discussed the work that has been done and will be done infrastructurally to reduce the University’s carbon emissions,—continuing to improve building insulation, for example, moving the University’s vehicle fleet to electric, and using available surface space for green roofs and solar panels, like those atop the Rose Hill regional parking garage.

The second speaker was Sameer Ranade, a climate justice adviser for the New York State Energy Research and Development Authority (NYSERDA), a public-benefit corporation whose mission is to “advance clean energy innovation and investments to combat climate change, improving the health, resiliency, and prosperity of New Yorkers and delivering benefits equitably to all.” Ranade’s position at the authority was created as part of the state’s Climate Leadership and Community Protection Act of 2019—which was signed into law at the Fordham School of Law—and he provides support for both New York’s Climate Action Council and the Climate Justice Working Group.

“Clean energy can actually lower emissions in all sectors, but especially so in buildings, transportation, and electric power generation,” Ranade said, noting that moving to clean energy would also add 10 jobs for every one job displaced, according to a study by the state’s Just Transition Working Group. He also encouraged audience members to attend one of the Climate Action Council’s remaining public hearings to share input on the scoping plan for New York’s climate goals.

Fordham professor John Davenport, Ph.D., discussed another element of mitigating the effects of climate change that is particularly important to New York and other coastal communities: managing stormwater runoff. As the danger of strong storms and flooding continues to increase, Davenport said, it will be essential to use infrastructure like green roofs and street trees to absorb water and limit runoff, and to provide tax incentives to land and building owners for implementing methods of runoff reduction.

“It’s going to be important to start using the language of savings,” Bell said in response to Davenport’s presentation, touching on the same need for good communication highlighted by the keynote speakers. “What it will save us rather than how much it will cost us.”