skip to main content
Return to Fordham University
You are at:Home»Fordham Magazine»Alumni News»At WFUV Sports, a Passing of the Torch
Above: WFUV sports director Rick Schultz (left) and former sports director Bob Ahrens (seated) in the studio with members of the broadcast team. Photo by B.A. Van Sise
Rick Schultz, FCRH ‘98, vividly remembers the first time he met Bob Ahrens. Schultz was a student at Fordham in 1997, when Ahrens arrived at WFUV to succeed the legendary Marty Glickman, who’d been overseeing the sports department at the station since 1988. As part of the transition, Glickman brought Ahrens to one of the regular Tuesday meetings in which Glickman would critique the FUV student broadcasters’ tapes.

Recalls Schultz: “He brought Bob in and said, ‘This is Bob Ahrens. This is the man who’s going to take this department to the next level.’ It didn’t take too long before we realized that Bob was bringing our standards to a level that they had never been at.”

A High Standard for Success

Indeed, over the next two decades, Ahrens ran a sports department that’s been widely praised for training future broadcasters in a professional environment. 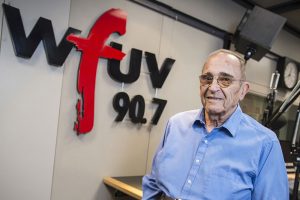 He insisted that the staff operate to pro standards, he says, not only because it’s good training but also because WFUV reporters are credentialed to cover the local pro teams alongside the rest of the city’s sports media. That mindset has paid off: During Ahrens’s tenure, WFUV produced the likes of ESPN host Tony Reali, FCRH ’00; CBS Sports’ Spero Dedes, FCRH ’01; and Ryan Ruocco, FCRH ’08, of ESPN and the YES Network, continuing Fordham’s long tradition of launching the careers of sports broadcasters.

In 2014, the station paid tribute to Ahrens by establishing the Bob Ahrens Award for Excellence in Sports Journalism. The award is given annually to a member of the WFUV sports staff who has excelled on and off the air and demonstrated strong leadership ability.

Ahrens retired earlier this year as the station’s executive sports producer, and now, as WFUV transitions to its next chapter, he is passing the torch to a familiar face: Schultz.

A Return to Rose Hill

Schultz says when he first heard about the opening at WFUV, he didn’t imagine himself as a candidate. “The first thing that popped into my head was, ‘They have to do it right, because he’s built such a legacy here that has to be protected and built upon.’”

But as he began to think about what he believed the ideal candidate would look like—an on-air background, teaching experience, and a connection to WFUV—he realized he had all three. His broadcasting career included stints with Army athletics, two minor-league baseball teams, and an ESPN Radio affiliate, and he’d taught at Marist College and the Connecticut School of Broadcasting.

He threw his hat into the ring and got the job, and since this summer he’s been working with Ahrens, who’s staying on through the end of the year as a consultant, to ensure a smooth transition. 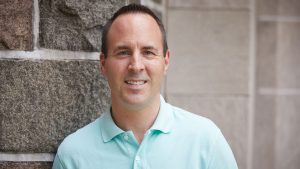 Rick Schultz returned to WFUV earlier this year to lead the sports department where he got his start as a student. (Photo by Gus Philippas)

“It’s always gratifying to see one of your former students get the job,” Ahrens says. “Rick was basically in my first group. It’s sort of like bookends.”

Schultz says that working with Ahrens has been helpful in ways both big and small, from learning how the station operations have changed since his own Fordham days to quickly tracking down a phone number he may need.

“It’s very important to me for the students to understand that I was in their position 20 years ago, and I know what it’s like to be sitting there and have someone new come in,” Schultz says.

“My message to the students over the past few months has been, ‘The great thing about WFUV is that this is your station.’” In other words, he’s there to help guide the students, not drastically change things. “I think when something’s working, you try as best as you can not to mess it up,” he says.

But Schultz says he’s also learning how to develop his own style and priorities. He says there’s room for growth in social media and video, and that he’d like to collaborate more with the news side of WFUV.

A “Perfect Fit” to Carry on the Tradition

Mike Breen, FCRH ‘83, the play-by-play announcer for the New York Knicks on MSG as well as the NBA on ESPN, says that Ahrens has been a “magnificent” mentor to members of the FUV sports department.

“He’s as dedicated to his job and to the students that he helped as anybody I’ve ever seen,” Breen says. “And because Rick came up through the system, and knows what the system’s about, it seems like the perfect fit for him to follow in Bob’s footsteps.”

More than 20 years ago, Schultz followed in Breen’s footsteps. As a high school student, he reached out to Breen to discuss the broadcasting business, and Breen told him about his experiences at WFUV and about Fordham’s strong tradition. Schultz says Fordham was the only school he applied to, and now, as he returns to Rose Hill, he’s reflecting on the icons who came before him at the station.

“It’s still kind of surreal for me to be sitting in this office looking at the portrait of Marty Glickman on the wall and the Bob Ahrens Award on the other side of the wall, and to be sitting here taking that next chapter of WFUV Sports,” he says. “It’s still something that really strikes you every day.”