skip to main content
Return to Fordham University
You are at:Home»Fordham Magazine»WFUV News Reporter Covers City Politics and the UN
Kacie Candela will receive WFUV’s Award for Excellence in News Journalism on Nov. 1. (Photo by Andrew Seger/WFUV News)
As a college student at Fordham, Kacie Candela interacts with many people over the course of a semester—her professors, her classmates, the members of the student outdoors club of which she’s president. But she’s also got 400,000 other people on her mind: the listeners of WFUV, Fordham’s public media station.

The Fordham College at Rose Hill junior works as a reporter and news manager at WFUV, where she anchors four newscasts every Wednesday, co-hosts a politics podcast, and covers the United Nations beat. On Nov. 1, she’ll be honored with WFUV’s Award for Excellence in News Journalism at the station’s annual On the Record fundraiser.

Managing her schedule has been a bit of a juggling act.

“There were days last year where I would go to class, come into work, go to class, and then come back to work,” said Candela, who started training at the station during her freshman year. “It’s a lot of balancing, but it’s my favorite place to be on campus. It’s my second home.”

A typical day at the station can go one of three ways for Candela: On Wednesdays, she builds and anchors her newscasts, which air during late afternoon and evening drive time. But on other days, she might be working on a “day-of” story, which she’ll pitch and then report on in the field. Or she might be working on her podcast, or a longer “deep-dive” story that she develops over time.

When she builds her newscasts, Candela combs the daily news wire for stories that will interest WFUV’s audience.

“We like to lead with a local story if there’s something relevant enough, as we’re a local station,” she said. She also needs to be mindful of the types of news she includes. “We’re public, we’re not commercial,” she said, “so we don’t cover the ‘if it bleeds, it leads’ stories. We don’t really cover crime. We don’t cover fires. We’ll cover politics, city news, human interest stories.”

On a recent day at the station, located in Keating Hall on the Rose Hill campus, Candela produced a short story on the eve of the New York City mayoral primaries. She wanted to include some commentary on Mayor Bill de Blasio’s chances, but she didn’t want it to be her own.

“As public radio journalists, we don’t do opinion,” she said. “Our job is to just give the listeners as balanced and unbiased a viewpoint on a story as we can.” 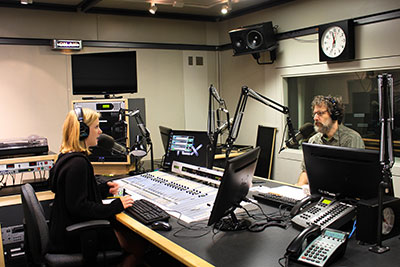 So she used a sound bite from an interview she’d done for her Prickly Politics podcast the day before. The podcast, which Candela started last summer with co-host and fellow FUV reporter Jake Shore, focuses on the mayoral race and examines New York City issues that are important to voters, like transportation, Rikers Island, and campaign finance. For this mayoral primary episode, she’d talked to Jeff Coltin, FCRH ’15, a reporter for City & State magazine and an FUV alumnus, about the mayor’s chances and the lack of available polls. So she grabbed the clip of that conversation, and her story, and headed into the recording booth to put it all together.

“Robin told me how to do breath marks after periods and certain commas, and George told me how to underline key words.” She read the script into the mic with the vocal cadences of a seasoned reporter, plugged in the sound clip from Coltin, and saved the piece to be included in her colleague’s evening newscast.

Candela said Shannon and Bodarky “have become advisers in every way. … They teach you the trade and they see you grow and they encourage your progress.”

Bodarky, who runs the news training programs, said Candela has an “overwhelming sense of confidence, which is pretty remarkable. She is someone who is not afraid to express her opinion or put forth ideas,” he said, adding that she also has all the qualities of a great journalist. “She’s curious, skeptical, she looks and listens for the truth, and she cares about the medium and wants to use it effectively.”

All WFUV student news reporters take Bodarky’s training workshop and complete an internship at the station before being moved to a paid reporter position. Students get vocal training, learn how to conduct interviews, study journalism ethics, and learn how to work audio recording and editing equipment. The training program—and the on-the-job experience that comes later—are often touted by alumni as the best journalism education around.

“Everybody knows the reputation that FUV has,” Candela said. “They know if they hire an FUV reporter straight out of college, they will come in knowing exactly what to do.” 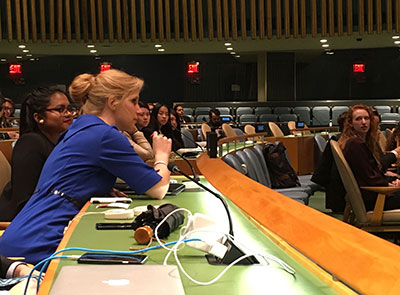 After recording her mayoral primary story, Candela searched for news about the U.N. Security Council meeting on sanctions on North Korea, scheduled to happen that day. Candela has a strong interest in the U.N. and has reported on it extensively for WFUV; her series on the U.N. election won a first-place New York State Associated Press award this year.

If the timing worked out, she would report on the North Korea meeting for WFUV; she was also writing about it for her other job as a freelance assistant editor for PassBlue, an independent website producing news about the U.N.

Candela learned about PassBlue when reporting a U.N. story for WFUV. She asked if they had any summer internships, and instead they asked her to pitch a story. Now she’s a paid freelancer with significant responsibilities. “I’ve been introduced to ambassadors and treated like a professional,” she said.

Connections for the Future

An international political economy major and a student in the Fordham honors program, Candela plans to stay at Fordham for a master’s in ethics and society. After that: law school.

“The things I’m reporting on right now are what I want to work on policy-wise later, like human rights and global issues and sustainable development goals. I think the connections I’m making now and the expertise I’m developing on these issues will definitely help later on.”