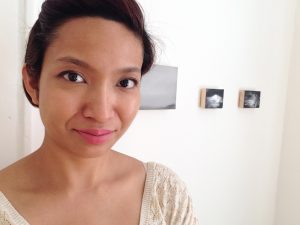 Like many children of immigrants in New York City, Katte Geneta, FCLC ’06, grew up with her head in two worlds.

“Both of my parents were born in the Philippines, and they’ve been bringing me and my sister back since we were kids,” she says. “I’ve always felt a sense of wonder when I go.”

Geneta recalls one of her first plane trips to her ancestral homeland, when she was about 4 years old.

“I was looking out over the Philippines, looking at the vast ocean, the water,” she says, “and I couldn’t tell if I was seeing islands or clouds.”

That impressionistic memory has inspired her recent work, the Cosmos Series, which was shown in New York City in September at the 7th Annual Governors Island Art Fair. (The artist-run show closed Sept. 28.)

Using a mix of natural materials, including volcanic ash and lahar, a hardened slurry of volcanic sludge that she grinds down, Geneta has created a series of “drawings from dust.” On her website she notes that she deliberately leaves the images in “an obscured state, somewhere between reality and memory.”

The ash and lahar Geneta uses come from the Philippines, from an aunt who lives in Quezon City, about 90 miles southeast of Mount Pinatubo. Twenty-three years ago, on June 15, 1991, Pinatubo exploded in what the U.S. Geological Survey has described as the second-largest volcanic eruption on Earth in the 20th century.

Geneta says using the volcanic materials in her art helps her get in touch with her Philippine heritage while conveying a sense of the beauty and destructive power of nature—and of the fragility of life.

“I wanted to use something that originated where my family originated,” she says. “And I felt ash would be perfect. I use chalk, volcanic ash, charcoal, things that crumble because they’re so delicate. That delicacy is what I wanted to carry over to the viewer.

“With dust,” she adds, “it’s related in a biblical sense, that we’re made of dust. I really like that.”

Casey Ruble, artist in residence at Fordham, is one of Geneta’s former professors. She says Geneta’s work has matured a great deal since her undergraduate days at Fordham College at Lincoln Center, where she earned a degree in visual art with a minor in philosophy. “But even then it was marked by a certain quietude, subtlety, and attention to the nuances of light, all of which come through strongly in the work she’s making today.”

Ruble adds: “Katte’s inclusion of volcanic dust as a medium … gives an edge to the more dreamy, soft-focus imagery, and also nods to the land art movement of the 1960s and ’70s.”

Geneta says she’s particularly influenced by water. She and her husband lived in Piermont, N.Y., before settling in the Inwood section of Manhattan. “Living next to the Hudson River,” she says, “has been a big thing for my work.”

In November, however, she’s opting for a temporary change of scenery. She’ll be taking part in the visiting artists and scholars program at the American Academy in Rome.

“I’ve never been to Europe, so I can’t imagine what it’s going to be like,” she says. “I’ll be there to absorb a new place and let it influence my work.”