skip to main content
Return to Fordham University
You are at:Home»Fordham Magazine»Alumni News»Vin Scully Honored at Los Angeles Reception
Vin Scully was all smiles after receiving the 2014 Ram of the Year Award at CBS Studio Center in Los Angeles on Jan. 14. Joseph M. McShane, S.J. (left), president of Fordham, bestowed the award on Scully, and Fordham Trustee Armando Nuñez, GABELLI ’82 (right), president and CEO of the CBS Global Distribution Group, hosted the event. Photo by Jeff Boxer
For one evening, Fordham University transformed the Entertainment Tonight soundstage into the set of the Vin Scully Show, honoring the legendary sportscaster with the 2014 Ram of the Year Award for his achievements in broadcasting and unwavering support of the University.

“Vin, you are one of our greatest heroes,” said Joseph M. McShane, S.J., president of Fordham. “From the heart, I want you to know you are for Fordham an example of a man for others, a man whose life has been a life of integrity, of service, of great devotion to the University. You could not be a better ambassador for us. Everyone at Fordham loves you as much as we revere you.”

Scully, a 1949 Fordham graduate, is ready to enter his 65th season as the voice of the Dodgers. He was inducted into the broadcasters’ wing of the National Baseball Hall of Fame in 1982, and has received numerous other accolades, including an honorary degree from Fordham, where he delivered the commencement address in 2000.

Scully said the University has been like a home for him for nearly his entire life.

“It’s great to be in a Fordham atmosphere,” he said. “Although this sounds corny, it’s true: I was born in the Bronx, and my mother actually wheeled me in a carriage on the campus. That was years ago. Little did I know, or she, that God would be so kind as to allow me to get into the Prep.”

After graduating from Fordham Preparatory School in 1944, he served briefly in the Navy before returning to Rose Hill to enroll at the University. The timing was fortuitous, he said. It allowed him to be at Fordham for the birth of WFUV, the University’s radio station.

At FUV, Scully honed his winsome voice and now-famous lyrical, descriptive style by calling Fordham baseball, basketball, and football games. One month before graduation, he landed a job with a CBS Radio affiliate in Washington, D.C. And one year later, he joined the Brooklyn Dodgers. In 1957 he moved with the team to Los Angeles, where he’s been ever since.

Father McShane thanked Scully for his ongoing support of the “radio station where it all began” and for inspiring generations of Fordham-trained broadcasters. 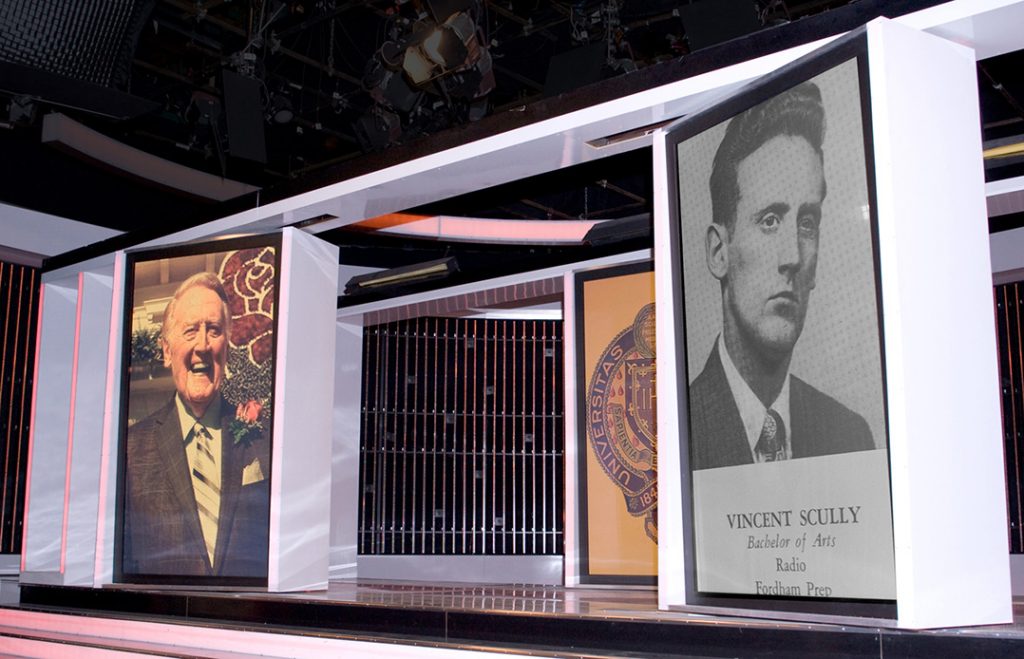 A picture of Scully as grand marshal of the 2014 Tournament of Roses Parade and his 1949 Fordham Maroon yearbook photo were among the images used to turn a CBS soundstage into a celebration of the broadcaster’s life and career.

After receiving the Ram of the Year Award, Scully, who played two seasons on the Fordham baseball team before joining WFUV, recalled some of his most memorable moments as a player. He was the Rams’ center fielder in one game against Yale, whose first baseman was none other than George Herbert Walker Bush. Fordham lost, and both Bush and Scully went hitless.

“Years later,” Scully said, “I’m playing golf with the president, and we eventually got to talking about the game. I said to him, ‘Mr. President, as long as you’re in office, you can say anything you want about your baseball career,’—he was captain of the team—‘but remember, the day you walk out of the White House, we both went 0 for 3.’”

Scully also spoke about how his faith and his family have sustained him through the years, calling his wife, Sandy, “the wind beneath my wings.”

On New Year’s Day, they were at the Tournament of Roses Parade in Pasadena. An estimated 700,000 people attended the parade, which Scully had the honor of leading as the grand marshal. “The best part of that,” he said, “was the fact that we could share the parade with most of our children and grandchildren. They were in cars directly behind us.”

The theme of the parade, Scully added, was “Dreams Come True.” And that took him back seven decades to Fordham Prep, sitting in the auditorium one day next to his classmate Larry Miggins.

Years later, on May 13, 1952, Scully was behind the mic in the broadcast booth at Ebbets Field when Miggins came to bat for the Cardinals.

“It was so hard to speak. The Dodgers had a left-handed pitcher named Preacher Roe from Ash Flat, Arkansas. Preacher Roe was going to face my buddy Larry Miggins, and I’m going to describe whatever happens,” Scully said. “And Larry Miggins hit a home run.

“You can imagine what an emotional moment it was. First, the shock that the ball was going to go so far, then the realization that it’s a home run and I have to talk about him running around, and it hits me—that back row in the auditorium at Fordham Prep. Somehow it all came to pass.

“Why? Don’t try to figure out life,” Scully said. “You’ll come to the conclusion God is good, and every now and then He’ll make an exception and let somebody like me slip through the cracks.”