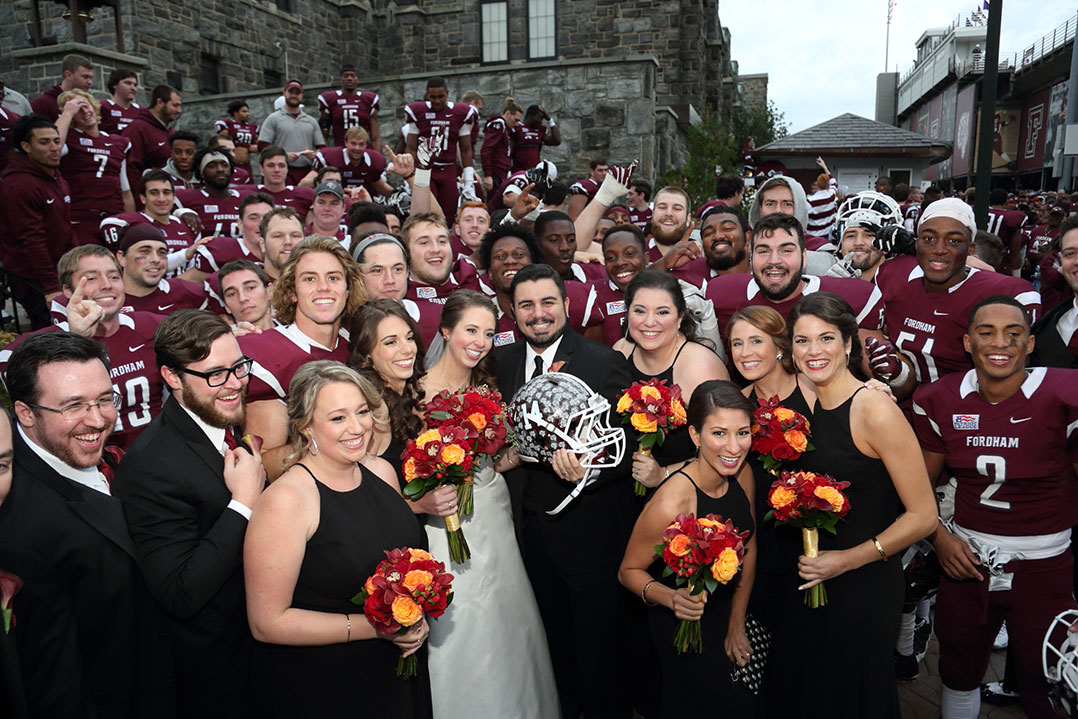 Photo by David Burton and The Pros

The sound of wedding bells from the University Church united with the chimes of Fordham’s Victory Bell when Christine Schwall, PhD, FCRH ’09, and Robert Pecci, GABELLI ’08, ran into the victorious Fordham football team after their wedding on November 7, 2015.

Schwall and Pecci have always had plenty of Fordham spirit; they first met in 2007, when they were captains at Fordham’s orientation for incoming freshmen. And they’ve cheered for the Rams together ever since.

“When we found out that there was going to be a home football game the day of our wedding,” Schwall says, “Rob kept joking, saying he wanted to ring the Victory Bell if they won!”

Schwall says they forgot about the joke during the ceremony. But when they were wrapping up their photo session on the steps of Keating Hall, they heard the stadium erupt with cheers—Fordham had just defeated Bucknell University. Pecci and his groomsmen ran to the stadium and arrived just as the Fordham Fight Song ended.

“He stepped out and yelled, ‘I just got married, can we take a picture!?’ and the whole team cheered and was super excited to oblige,” Schwall explains.

The alumni couple and their bridal party, which included several Fordham alumni, gathered with the team by the Victory Bell.

“It was truly special,” says Schwall of the joint celebration.

Visit the Weddings at Fordham webpage for more information on how to plan your wedding at the University Church.