skip to main content
Return to Fordham University
You are at:Home»Fordham Magazine»Books»Upscaling Downtown 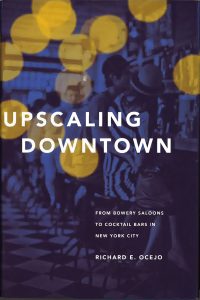 Few New York City neighborhoods have been as transformed in recent decades as the Lower East Side, East Village, and Bowery. The formerly working-class areas, points of entry for generations of immigrants, are now among the trendiest and most expensive parts of Manhattan. In this book, sociologist Richard Ocejo focuses on the neighborhoods’ changing bar and nightlife scene (between 1985 and 2005, he notes, the number of bars in the area more than tripled). In a clear, engaging style, he analyzes what he calls “the social ecosystem of bars,” the forces and people—new and longtime residents, tourists, public officials, activists, nightlife entrepreneurs, landlords, real estate agents, etc.—who have fostered and fought gentrification. His aim, he writes, is to “raise awareness of the impacts of commercial change on everyday life” and to offer insight into New York’s transformation into “a place for upscale living at the center and, at the margins, for lifestyles that range from edgy to impoverished.”