skip to main content
Return to Fordham University
You are at:Home»Fordham Magazine»Books»Ty Cobb: A Terrible Beauty 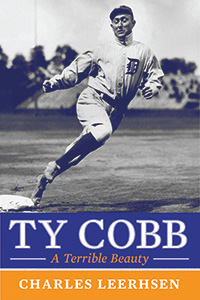 For decades people have assumed the worst of Ty Cobb. The Georgia Peach, who played from 1905 to 1928, was perhaps the greatest baseball player of all time—undoubtedly one of the most aggressive and exciting. But was he a violent racist who attacked a groundskeeper simply because he was black? Did he intentionally injure opponents with his spikes? According to Charles Leerhsen, the popular perception of Cobb the psychopath is largely a myth created by biographer Al Stump, whom Leerhsen brands a liar. The truth, in Leerhsen’s compelling telling, is that although Cobb was a complex, ornery, violent character, he was not the monster he’s been made out to be.