Bringing Bronze Back to Ireland

Fiona Murtagh, FCRH ’16, won a bronze medal as part of Ireland’s women’s coxless four rowing team on July 27. Murtagh, an Irish native, rowed for Fordham as an undergraduate after transferring from the National University of Ireland in Galway. As a Ram, she led women’s rowing to two victories at the Head of Charles regatta and was named to the All-Atlantic 10 first team in 2016.

In early August, Murtagh arrived back to her hometown of Moycullen, in County Galway, with fans cheering her on amid celebratory bonfires. After spending a month before the Olympics in a training bubble, Murtagh told The Irish Times, “We deserve a break to spend time with family and friends. It’s been so long since we have seen anyone.”

Forget Tokyo, the real Olympic village is Moycullen this evening! A homecoming to welcome back rowing medallist Fiona Murtagh – not every day an Olympic medal comes through the parish. #Olympics #Tokyo2020 pic.twitter.com/s3wjKOY6pN

A ‘Gutsy’ Performance from a U.S. Pitcher

Soon after Murtagh received a hero’s welcome in Ireland, former Rams pitcher Nick Martinez took the mound as the U.S. baseball team’s starting pitcher in the gold medal game against Japan on August 7. He earned the starting nod after striking out nine and picking up a win against South Korea in the group stage. Although the U.S. fell to Japan, 2-0, to claim the silver medal, Martinez made a strong showing, striking out seven batters over six innings while allowing one run. In the publication’s game recap, USA Today called Martinez’s performance “gutsy” and stated that he “[kept]the U.S. in the ball game.”

Martinez, who was drafted by the Texas Rangers in 2011, after his junior year at the Gabelli School of Business, made his Major League Baseball debut for the Rangers in 2014 and started 68 games for the team over four seasons—including several games at Yankee Stadium. He has been pitching professionally in Japan since 2018, first for the Hokkaido Nippon-Ham Fighters and currently for the Fukuoka SoftBank Hawks.

Rowing for Gold and Silver in St. Louis 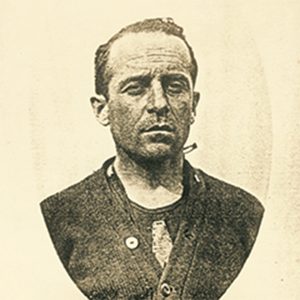 Martinez and Murtagh are not the first Rams to take their places on the Olympic podium. In 1904, at the summer games in St. Louis, 1894 Fordham graduate John J. F. “Jack” Mulcahy and his partner, William Varley, won gold and silver for the U.S. in two rowing events: the double sculls and pair without coxswain, respectively. Mulcahy had developed an interest in rowing at an early age, at a time when the Harlem River played host to popular regattas.

After the Olympics, Mulcahy worked briefly as a New York City alderman and as vice president of Midvale Steel Company. He returned to Fordham in 1915 to help the University launch its rowing program and served as the team’s inaugural coach. Vincent M. Doherty, a 1918 graduate and a member of the 1915 freshman crew, recalled that Mulcahy “was a stern master,” but that “he had the affection and respect of every man on the squad.”

A Steeplechase Medal as a Student

At 1932’s Summer Olympics in Los Angeles, Joe McCluskey, then a Fordham junior, won bronze in the steeplechase—a seven-and-a-half-lap race that includes both standard hurdles and water jumps. In his 2002 obituary, The New York Times noted that had officials not made a mistake in lap counts, McCluskey would have won silver. 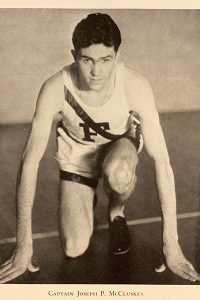 In the 1933 edition of the Fordham Maroon yearbook, McCluskey’s entry read, “Any introduction to this son of Fordham would be superfluous for he is known to every man on the campus because of his athletic conquests,” and his classmates recognized him as the student who had “Done Most for Fordham.” Throughout his career, McCluskey won 27 U.S. track and field titles.

Double Gold and an Olympic Record

Also willing to push himself to exhaustion was Tom Courtney, FCRH ’55, who won the gold medal for the United States in the men’s 800-meter race at the 1956 Summer Olympics in Melbourne, Australia.

“It was a new kind of agony for me,” Courtney recalled of the race, in which he set an Olympic record time of 1:47.7. “I had never run myself into such a state. My head was exploding, my stomach ripping, and even the tips of my fingers ached.” 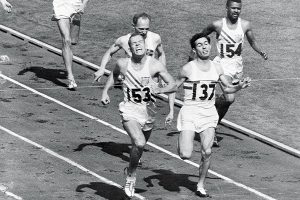 Tom Courtney, no. 153, crossing the finish line for the gold medal in the 800-meter race at the 1956 Olympics in Melbourne. Photo: Getty Images/Bettmann

Five days after that race, he earned another gold medal, as the anchor of the U.S.’s four-man, 1,600-meter relay team.

“When I got back to the States, I appeared on the Ed Sullivan Show,” Courtney wrote in his memoir, The Inside Track (Page Publishing, 2018). “There was a big party at Leone’s Restaurant, and a wonderful parade down Fordham Road. I was in a convertible with my coach, Artie O’Conner. He was very motivational for me. … He loved Fordham and it helped me to love Fordham.”

After the Olympics, Courtney went on to earn an M.B.A. from Harvard and had a long career in business. He retired in 2011 as chairman of the board of Oppenheimer Funds.

Mulcahy, McCluskey, and Courtney are all members of the Fordham University Athletics Hall of Fame.