In 1972, four years after their success on the show, FORDHAM magazine caught up with them. McMahon, FCRH ’69, who had married his classmate Jeanine Durbin, TMC ’69, was in his third year at Harvard Law School. Ellard, FCRH ’69, was a graduate student in philosophy at Yale, where he was writing a thesis on “ideology in political philosophy.” Leahey, FCRH ’69, was a fourth-year student at Columbia University’s College of Physicians and Surgeons. And Ouzounian, FCRH ’70, had earned a master’s degree in drama at the University of British Columbia.

The magazine also noted that two other Fordham students—“supernumeraries” Judith Aissen and Mary Daly, both members of the Thomas More College Class of 1969—didn’t appear on the TV show but contributed to the team’s success by providing considerable “bench strength.” 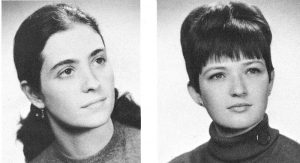 All six College Bowl teammates went on to remarkable careers:

Judith Aissen, Ph.D., earned her doctorate in linguistics at Harvard and is currently professor emeritus of linguistics at the University of California, Santa Cruz, and an expert in Mayan languages.

Arthur McMahon is a partner at Nixon Peabody, where for many years he led the law firm’s public finance group.

George Ellard, who captained the 1968 College Bowl team, went on to serve as inspector general of the National Security Agency, a position he held from 2007 to 2016. He’s currently an assistant professor at the National War College.

Edward Leahey earned his medical degree at Columbia and was directing the Cardiovascular Clinical Pharmacology Laboratory at Columbia-Presbyterian in 1981, when he died of a rare heart ailment. He was only 33 years old, but as director of the lab, he’d already discovered an interaction between two commonly used drugs, quinidine and digoxin, a discovery that “permitted physicians to avoid the potentially fatal toxicity produced by the interaction,” The New York Times reported.

Richard Ouzounian went on to a long and distinguished career in the performing arts and as a journalist. He has written, directed, or acted in more 250 productions, and in December 2015, he retired as chief theater critic for the Toronto Star, a position he’d held since 2000.