skip to main content
Return to Fordham University
You are at:Home»Fordham Magazine»Features»Tribute: Harvey Humphrey, WFUV Pioneer and Lifelong Teacher and Learner
Photo courtesy of Elisabeth Philippe
In recent years, WFUV, Fordham’s award-winning public media station, has built a national reputation as a champion of live music—from its concert broadcasts in partnership with local venues to its FUV Live series, which brings artists including Phoebe Bridgers, the Hold Steady, and Black Pumas to the Rose Hill campus to perform in Studio A. But in the 1950s and ’60s, during Harvey Humphrey’s time as FUV’s station manager, it had become increasingly uncommon for radio stations to place such importance on live music.

“It is much easier to put on records,” Humphrey told The Fordham Ram in 1962. “Live recitals require more effort in planning and programming.” Nevertheless, he said, the station felt a responsibility to provide musicians in the metropolitan area with an outlet for their talents.

Humphrey, who died at 96 on October 31, 2021, surrounded by his family at home in Mamaroneck, New York, was not only a community-minded station manager. He was a longtime instructor and administrator with deep connections to the Bronx and the University, an educator whose love of language and teaching impacted the Fordham community in multiple ways.

A Native New Yorker with a Love for Language

Humphrey was born in New York City in 1925 and lived in the Bronx with his parents and two brothers before the family moved to Rome, New York, where he attended St. Aloysius Academy (now known as Rome Catholic). They later moved to Yonkers, New York.

After high school, Humphrey joined the Army and served in World War II as a first lieutenant in what would later become the U.S. Air Force. When he returned home after discharge, he enrolled at Fordham College at Rose Hill, where he worked at WFUV and graduated with a bachelor’s degree in 1950. After a four-year stint working in the music department at WPAT in Paterson, New Jersey, he returned to Fordham to pursue a master’s degree in education. Upon graduating in 1957, he became broadcast supervisor and station manager of WFUV, then a student-run station overseen by the communications department. 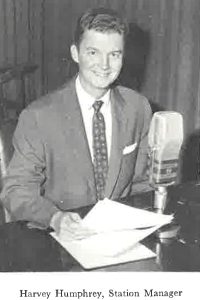 Humphrey in the WFUV studio in the early 1960s.

In six years at WFUV, Humphrey developed programs ranging from opera appreciation shows for children to live broadcasts from the New-York Historical Society. William K. Trivett, S.J., the station’s director and general manager at the time, praised him for developing WFUV’s programming and strengthening its presence in the city.

“Under Harvey Humphrey’s direction, WFUV has achieved an important place in New York’s outstanding group of FM stations,” Father Trivett told The Fordham Ram in 1963, describing the station as “a pioneer” that had “matured along with FM radio with programs that we are proud of in areas of both music and lecture.”

From 1953 until his retirement in 2007, Humphrey also served as an instructor in the communications department, teaching courses including Speech Improvement and Effective Speaking. In the classroom and at WFUV, Humphrey worked with a number of students who would go on to become successful radio and television broadcasters, from sports announcers like Mike Breen, FCRH ’83; and Michael Kay, FCRH ’82; to music radio hosts like Paul Cavalconte, FCRH ’83.

“You could always call Harvey for pronunciations during a classical concert,” recalled Cavalconte, who has long been a fixture on New York radio and currently hosts programs on WNYC, WQXR, and WFUV. “I never look at a Russian name without thinking of Harvey drilling, ‘It’s the middle syllable of three, or the third of four—Ro-stro-PO-vitch.’ He had a dozen like that.”

Fordham in the Family

Humphrey’s connections to Fordham went beyond his involvement as a student, administrator, and instructor.

His wife, Mary Humphrey, earned a master’s degree from the Graduate School of Education in 1973 and is a former adjunct professor of English at the University. They met in 1960 when she was a graduate student and he delivered a guest lecture on Spanish painters in one of her classes, and they were married three years later. Mary also went on to teach at Rose Hill, and the couple had adjacent offices in Keating Hall for a time. They both received Bene Merenti medals from Fordham: Mary for 20 years of teaching in 2009, and Harvey, twice, to mark his 20- and 40-year milestones as an instructor. He also received an Archbishop Hughes medal in recognition of his decades of service as an administrator.

The couple’s three daughters—Mary Goldszer, FCRH ’86, GSE ’87, ’91; Elisabeth Philippe, FCRH ’86; and Emily Kayser, GSE ’93—all earned Fordham degrees, and according to Philippe, Harvey’s great-grandparents even owned a restaurant near campus in the early 1900s.

“We spent a lot of time on campus growing up,” Philippe recalled. “It was really like our backyard.”

She has fond memories of students and priests attending big Sunday dinners at the Humphrey home, and she said one of her father’s students who cared for the live ram mascot on campus at the time would let her and her sisters pet the animal when they visited Rose Hill.

Humphrey used his hobbies to connect with students, Philippe said. An avid photographer, he would take pictures of campus, mount prints on foam core, and give them to students as graduation gifts. And with his musical inclinations, he led a student recorder group, the Agincourt Consort.

Philippe recalled that her father would videotape all his students on the first day of class so that he could learn their names quickly. When they showed up for their second class, Philippe said, they would all be shocked that he had not only memorized but also mastered the pronunciation of everyone’s name.

Throughout his career at Fordham, Humphrey found a way to incorporate many of his interests—from music to photography to literature—into the courses he taught. 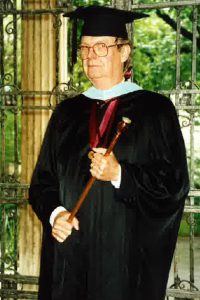 “‘Renaissance man’ is the way to describe my dad,” Philippe said. “[He gave] a lot of care and attention to so many different things.”

In retirement, he attended the Metropolitan Opera as often as he could, she said, and along with the recorder, he played both guitar and piano, an instrument he taught to children. His love of language and talent for oration found another outlet in his role as a lector at the Saints John and Paul Church in Larchmont, New York, his local parish.

“He had a wonderful voice,” Philippe said. “When he started to read, people’s heads would snap back. He was very attuned to language, phonetics, and correct pronunciation.”

More than anything else, though, he was dedicated to his family, Philippe said. Growing up, his daughters were supported in their various pursuits, from sports to music, and he placed a great deal of importance on hearing about their days while the family ate dinner. As a grandfather, Humphrey was engaged in his grandsons’ activities, from teaching them piano to proudly attending their graduation ceremonies. “They just loved to be around him,” Philippe said.

In his approach to both academia and family, those who knew him best said he was guided by a lifelong love of gaining and sharing knowledge.

“Geoffrey Chaucer described Harvey best in the prologue to his Canterbury Tales in his character the Clerk,” Mary said. “‘And gladly would he learn and gladly teach.’”