skip to main content
Return to Fordham University
You are at:Home»Editor's Picks»Through Local Storytelling, Oscar-Nominated Moonlight Illuminates Miami, Film’s Co-Producer Says
UPDATE: On Feb. 26, “Moonlight” won three Academy Awards, including best picture. Filmmaker Andrew Hevia, a 2015 graduate of the Gabelli School of Business, was a co-producer of the film. He is shown above in Hong Kong, where he filmed a documentary last year. (Photo by Robert Scherle)
When he was co-producing a small, independent movie in Miami two years ago, fresh from earning a master’s degree at Fordham, Andrew Hevia had anything but awards on his mind. It was a hectic 25-day production, “a Hail-Mary pass” of a film and “the least commercial movie you could make,” he says, a thrilling experience that gave him the chance to work with people he greatly admired. When it wrapped, he moved on to his next project, filming a documentary in Hong Kong with support from a Fulbright award he won at Fordham.

And then people saw the movie he co-produced in Miami. Released last fall, it was acclaimed as one of the year’s best films, breathtaking and groundbreaking, “a poem written in light, music and vivid human faces,” according to The New York Times. It won dozens of awards, including the Golden Globe for best drama, and it’s in the running for eight Oscars—including best picture and best director—at the 89th Academy Awards on Feb. 26, which Hevia plans to attend.

The movie is Moonlight, a drama about the tribulations of a young black man growing up in a struggling Miami neighborhood known locally as Liberty City, where the movie’s Oscar-nominated director, Barry Jenkins, grew up. Hevia, who earned a master’s degree in media entrepreneurship at the Gabelli School of Business, spoke to FORDHAM magazine from his home in Los Angeles about the importance of making movies like Moonlight that show a locale’s true character.

How did you become involved in the making of Moonlight?
Barry Jenkins and I both went to Florida State film school for undergrad, and one of my best friends was co-producer on Medicine for Melancholy, Barry’s first feature, which he shot in San Francisco in 2007 while I was living there. I loved the idea that they were filmmakers from my program who were actually making films from the ground up, outside the studio system. When it became clear to me that Barry had made a movie about San Francisco that people later talked about as the definitive San Francisco film, because of the look and feel of it, it bothered me on a level that is not rational that Barry wasn’t making that movie in Miami about Miami. I made it my goal to get Barry back to Miami to make a movie. 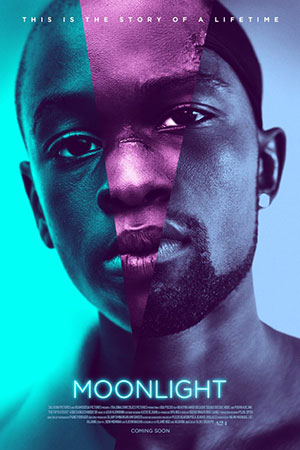 A pre-release poster for “Moonlight” (Photo by A24)

Then, in 2010 or 2011, Tarell Alvin McCraney gave me a copy of his unfinished play In Moonlight Black Boys Look Blue—the story that eventually became Moonlight. I introduced him to Barry, gave Barry a copy of the play, and told him, “This might be the thing you make in Miami.” Time passed, Barry digested it, then the veteran producer Adele Romanski got wind of it, and she and Barry got Plan B, Brad Pitt’s production company, and the distributor A24 involved. They told me, “You’re the Miami guy. You should come on as co-producer.” I went to Miami after graduating from Fordham to start laying the groundwork.

Why did you feel so strongly about having Barry Jenkins make a movie in Miami?
When people think about Miami, they think about media produced by people from outside Miami, which often misses everything about the city that makes it such a strange and unique and wonderful place. An organization I co-founded in Miami 10 years ago, the Borscht Film Festival, is devoted to telling Miami stories—ideally, stories that go deeper than the South Beach or Miami Vice portrayal. One of the great things about new media is that more diverse voices can speak up for themselves, and communities can speak for themselves, so the goal of Borscht was to build that for Miami, a city of diverse voices. Again, one of my goals was always to get Barry back, and I did—in 2011, we produced a short film called Chlorophyll, in which Barry explored Miami with new eyes after growing up there and then finding his “voice” as a filmmaker in San Francisco.

Naomie Harris has talked about being reluctant to play the mother of the main character, because so often, images of black women as crack addicts tend to be stereotyped characterizations of bad mothers. And one of the reasons she’s nominated for best supporting actress for it is that she fully rounded out that person and made it a real characterization of a woman who loves her child but is also struggling with this other problem. So you have the complicated messiness of actual life, not a simple, stereotyped version of bad people doing bad things.

What did you do as co-producer?
As a co-producer, my job description was basically “help Barry Jenkins and Adele Romanski get the movie made.” During early pre-production, I was local to Miami, so I did a lot of the ground-level things like finding community partners and setting up casting events a few months before the rest of team arrived. During production my job description was a lot more flexible. On any movie, especially a small one, there are so many things you can’t control that you always need someone to help deal with the unexpected. That was me. I was a fireman, and my job was to solve problems and find solutions. It was a fantastic job and it was a privilege to work with this team.

RELATED STORY: Read “After Graduation, a Year of Examining Art and Identity in Hong Kong”Are there parallels between Moonlight and the documentary you recently filmed in Hong Kong, focused on the city’s evolving identity as a hub for the arts?
Definitely. My approach to storytelling is that I focus on the location and try to embrace the local version of the story. I ended up making a very personal documentary about my experience in Hong Kong, about Hong Kong in transition, and about the complicated political dynamics of contemporary art. It’s on-the-ground reporting. The film is in post-production, and hopefully it can be released in the fall. That film and that process were amazing. Fordham and the Fulbright changed my life.

After Hong Kong, I went to Ecuador for two months to do another film, a family drama that takes place in Quito, under the cloud of an erupting volcano. I really like the specificity of place; it helps tremendously when stories make the effort to be authentic and grounded in actual places. It makes stories specific and personal.

Why do you think Moonlight has been so well-received?
Partly because it takes things you think you know and it pushes deeper. It tells a hidden story sincerely and with real feeling. It’s been amazing—I was at the International Film Festival Rotterdam recently, and I was talking to a blond Dutch girl who was telling me that she and her friend watched it and what they thought about it, and I’m thinking, this is so far from the demographic I had ever thought would see this movie, let alone have strong opinions of it, let alone talk about it like it was a necessary, urgent thing for her to have seen.

And that was a wonderful experience. I crossed an ocean, and they’re talking about this movie that takes place in this little neighborhood that has been marginalized and ignored by the dominant conversation for decades. When the international press describes it as a movie about the Miami you never see, to me, that’s mission accomplished.

Watch the official trailer for Moonlight: