skip to main content
Return to Fordham University
You are at:Home»Fordham Magazine»Books»Thomas Berry: Selected Writings on the Earth Community 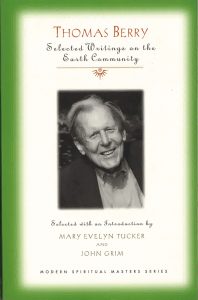 When Thomas Berry died in 2009 at the age of 94, The New York Times called “his influential writings … an early call to humanity to save nature in order to save itself.” In this collection of his work, Mary Evelyn Tucker and John Grim, the founding co-directors of the Yale Forum on Religion and Ecology, pay tribute to their former Fordham mentor, who “reshaped our thinking about human-Earth relations” and “awakened religious sensibilities to the environmental crisis.”

A Catholic priest, Father Berry taught at the University from 1966 to 1979 and was an “anomaly in Fordham’s theology department,” Tucker and Grim write, because he “was neither a Jesuit, nor a theologian.” He established a graduate program in the history of the world’s religions and later called himself a “geologian,” a portmanteau that describes his focus on relating humanity’s spiritual and cultural evolution to the natural history of Earth and the universe. Humankind, he believed, is poised at an evolutionary “moment of grace,” ready to shift its view of its place in the universe. “The Great Work now,” he wrote, is to carry out “the transition from a period of human devastation of Earth to a period when humans would be present to the planet in a mutually beneficial manner.” His urgent, hopeful message has never been more timely.