skip to main content
Return to Fordham University
You are at:Home»Fordham Magazine»Features»The Victory Bell Rings Again, This Time to Honor Student Veterans
Nineteen graduating veterans took part in a new Victory Bell ceremony on May 17. Photos by Chris Taggart
The day before Fordham’s 2019 commencement, a tone of celebration echoed across the Rose Hill campus, over and over, as student veterans stepped up to the Victory Bell and gave its clapper a swing—ringing in a new tradition for the iconic bell that has military origins.

The inaugural Victory Bell ceremony is “something special to recognize our student veterans in a way that shows our gratitude for their service,” said Matthew Butler, the University’s director of military and veterans’ services. While ringing the bell, each veteran also wore a newly created medallion—given to all graduating veterans—that had just been conferred in a ceremony in Keating Hall.

The May 17 ceremony marked another effort to embrace military veterans and make them feel welcome and supported at Fordham, consistently ranked among the top military-friendly Yellow Ribbon universities by Military Times.

Butler noted that the Victory Bell is one of many military symbols around Rose Hill. Traditionally rung to celebrate Ram athletic victories, the bell was taken from a Japanese aircraft carrier and was presented to the University by Admiral Chester W. Nimitz in 1944 in remembrance of lives lost in the conflict.

The Victory Bell ceremony “recognizes more than just the completing of the requirements for your degree,” Butler said in the Keating Hall ceremony. “We recognize the whole person today. Today’s graduates are special,” he said, for taking the path of military service—“a path less traveled”—on their way to college graduation.

More than half of service members and veterans name educational opportunities as one reason for joining, he said, and noted the many first-generation college students enrolled in the School of Professional and Continuing Studies.

“Today marks the end of one chapter of our lives, and for most all of you, I suspect part of [your]continued journey is service—service to our nation, to our communities, to the men and women of the world. For we are men and women for others. It’s part of our Jesuit education and ethos,” said Butler, PCS ’17, a member of the Class of 2019 who is completing a master’s degree in nonprofit leadership.

Another speaker was Wesley Wilson, president of the Fordham Veterans Association, who described his initial trepidation at leaving the service. He wondered if anything else would be as fulfilling, “but Fordham quickly assuaged any of my concerns,” he said. “As you walk around campus … you quickly get a sense that there’s something different about Fordham.”

“The mantra of cura personalis, or care for the whole person, has given Fordham a very special place in my heart,” he said. “It was through Fordham that I was given the opportunity to continue serving—this time, my fellow student veterans.”

Nineteen graduating veterans, including Butler, took part in the ceremony, joined by friends and family members. Wilson had 14 family members make the trip from South Carolina for his graduation from the School of Professional and Continuing Studies with a bachelor’s degree. He ascended the steps to the Victory Bell with his 9-year-old nephew, Preston, who gave the clapper a good, strong tug.

Butler, invoking a common Jesuit expression, exhorted the graduating veterans to “go and set the world on fire.” 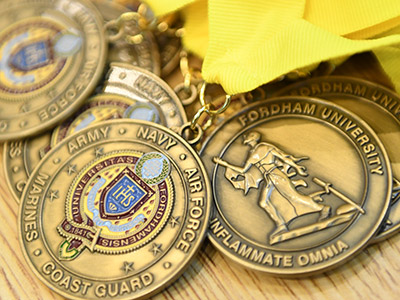 The new medallion being given to graduating veterans

“Set it on fire with your continued service, with your compassion, with your conscientiousness, with your care for your fellow man, with the zeal that you learned in the military to take on all challenges, large and small.”

He named several new efforts carried out with student veterans’ help, like expanding the orientation for new student veterans from one hour to a full day and holding it at both the Rose Hill and Lincoln Center campuses. Other initiatives include a student veteran career ambassadors program, a disability services program, and an online checklist for veterans making the transition to college.

Another new initiative provides services and support for student veterans’ spouses and children.

“A huge thanks must be given to our families, who support us through this academic journey,” Butler said. “Today we say thank you, because we couldn’t do it without you.”