skip to main content
Return to Fordham University
You are at:Home»Fordham Magazine»Books»The Unquiet Daughter: A Memoir of Betrayal and Love 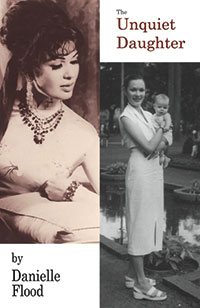 The Unquiet Daughter: A Memoir of Betrayal and Love by Danielle Flood, TMC ’73 (Piscataqua Press)

Danielle Flood, TMC ’73, was born in Saigon and raised in the United States, the product of a wartime love triangle that inspired The Quiet American, Graham Greene’s 1956 novel about the early days of U.S. involvement in Vietnam.

“I am a sequel he never wrote,” she claims in this powerful memoir of her emotionally turbulent upbringing and her decades-long quest to learn the truth about her parents.

Flood’s beautiful but troubled French and Vietnamese mother raised her fitfully, lying to her about their past. “I lived for decades in mystery,” writes Flood, who attended convent schools on Long Island and in Dublin before graduating from Fordham in the early 1970s. She ultimately found her way as a journalist and, over the years, uncovered “pieces of truth” about her family’s history in Southeast Asia, France, and the United Kingdom.

For years, she avoided writing this memoir. But as her own children grew up, she realized it was time to tell her life’s story. “It has taken me more than half a century to get here, tapping at the keys of my life,” she writes. The result is a compelling, poetic account of self-doubt, self-discovery, and the power of love.