skip to main content
Return to Fordham University
You are at:Home»Fordham Magazine»Jane Bartnett, MC ’76: The Ties That Bind

From Capitol Hill to New York City, Jane Bartnett, MC ’76, has enjoyed a three-decade career in news and public relations. Now she’s using her expertise to bring together Fordham and Marymount alumni at Jubilee.

“[E]very year I see more [Marymount] graduates at the Saturday picnic, at Mass, and at the evening gala, dancing the night way,” says Bartnett, who is in her second term as president of the Marymount College Alumnae Association.

Since 2010, when Marymount alumnae first held their reunion at Rose Hill, attendance has grown. In 2013, the number of attendees more than doubled to 93 from the year prior. And this year, 100 people have registered, putting alumnae on track to hit a new record with a month still to go until the reunion. They “have decided to make this an annual event where they can see their close friends and have a great weekend,” Bartnett says.

The three-day weekend of activities will kick off on Friday, June 5. Among the Marymount-specific events is an evening cocktail party at the Rose Hill campus on Friday, and a Mass and brunch in Tarrytown on Sunday.

Bartnett is also looking forward to the annual Marymount Alumnae Awards Ceremony, “a treasured part of our history,” which will be held at Rose Hill on Saturday, June 6.

Bartnett first met one of the honorees, Susan Lucci, MC ’68, three decades ago. It was the Marymount name that brought them together.

While working for ABC News in Washington, D.C., during the early 1980s, Bartnett was assigned to cover a charity event on the Washington Mall. She spotted Lucci—one of Marymount’s most famous alumnae, already a decade into her Emmy Award-winning role as Erica Kane on All My Children—and sent a note over to the actress. Bartnett identified herself as an ABC News producer and a fellow Marymount graduate. “Susan pointed her finger to me, said, ‘Marymount?’ and I said, ‘yes,’ and she came right over and we did the interview,” Bartnett recalls. “How those [college]ties bind you.” 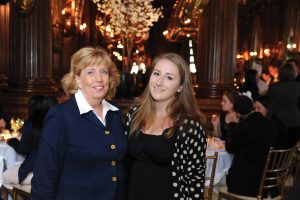 Jane Bartnett, MC ’76, with Christina Dowe at the 2015 Scholarship Donors and Recipients Reception. Dowe, a FCRH junior and daughter of Janet Dowe, WEC ’86, is one of the two recipients of this year’s Marymount Legacy Fund Endowed Scholarship. (Photo by Chris Taggart)

The Marymount bond also helped Bartnett kick off her communications career at ABC News. After earning a master’s degree in public administration from American University, she interned with Ann McLaughlin Korologos, MC ’63, and her then-husband John McLaughlin, host of The McLaughlin Group, at their public affairs business. With help from Korologos, who went on to become U.S. secretary of labor from 1987 to 1989, and Lucille Larkin, MC ’60, a former journalist and consultant with the cable industry, Bartnett got her foot in the door at ABC.

As an off-air reporter and producer for ABC News’ Washington bureau, Bartnett interviewed members of Congress and State Department officials and covered press conferences at the White House during the early years of President Regan’s first term. She produced news stories and covered breaking news for ABC News shows such as This Week with David Brinkley, World News Tonight, and Good Morning America.

“I was there during [a]tumultuous time, a busy time, but it was an exciting time—[to be]in your 20s, in Washington, at the pulse of everything,” says Bartnett, recalling several global events she covered, such as Poland’s Solidarity movement, the Beirut barracks bombing, and the wedding of Prince Charles and Lady Diana. “It was tremendous experience.”

After five years with ABC, Bartnett joined vice president Walter Mondale’s U.S. presidential campaign as a member of the national press advance staff. Following the election, she returned to New York and transitioned into public relations, working at Rubenstein Associates, Porter Novelli, and the Association for a Better New York until 1992, when she launched her own public relations business. For 15 years she served a range of clients in the New York City area, including the Sports & Arts in Schools Foundation, the United States Tennis Association, and Volkswagen.

In 2008, Bartnett joined State University of New York (SUNY) Maritime College, a former client, as the school’s communications director. After a few years in the SUNY system, she returned to her public relations business and decided to devote more time to volunteer activities, including her service to the Marymount Alumnae Association.

“There’s tremendous value for Marymount and Fordham people to get to know each other,” says Bartnett. “That networking is what makes the world go round. There’s so much common ground.”

Bartnett knows this firsthand. As an urban studies major at Marymount, she spent a semester in her junior year taking courses at Fordham, where she made some lifelong friends. She made a serendipitous Fordham connection when she moved from Washington, D.C., to Point Lookout, New York, a beach community where her grandparents bought a summer home in the 1930s. She rented a house next door to another longtime resident, John Galvin, FCRH ’70. “Between our Point Lookout roots and Fordham memories, we had a lot to talk about,” Bartnett says. She and Galvin have been married since 1994.

“There’s tremendous value for Marymount and Fordham people to get to know each other. There’s so much common ground.”

Bartnett often travels to Fordham alumni events and visits with the many Marymount in attendance. She has worked closely with alumnae board officers Jean Wynn, MC ’80, and Mary Donohue, MC ’79, on a new alumnae directory. They’ve also established the annual Mother Butler Leadership Award “to strengthen the ties between Marymount alumnae and the Religious of the Sacred Heart of Mary,” who, Bartnett says, “are making a real difference in the world.” The award, given at the Marymount Founder’s Day celebration in December, honors a RSHM-affiliated organization.

Under Bartnett’s leadership, the Marymount Endowed Legacy Fund has grown substantially. Established in 2006 to honor Marymount College, the fund supports young undergraduate women at Fordham University who have a family connection with Marymount. Alumnae and friends have contributed approximately $675,000 toward the $1 million goal, and 11 scholarships have been awarded to young women.

“To see this commitment to helping young women complete their college degree and receive this fine Catholic education” is very gratifying, Bartnett says. “It’s good to know that the Marymount story still lives.”