skip to main content
Return to Fordham University
You are at:Home»Fordham Magazine»Features»The Spirit of ’65: How a Student-Led Campaign Brought Football Back to Rose Hill

Fordham has a rich football history: Think Vince Lombardi, FCRH ’37, the Seven Blocks of Granite, and a 1942 Sugar Bowl victory. But in 1954, Fordham discontinued the program because of cost concerns, and football didn’t return for another decade, when it was brought back by an enterprising group of students.

In spring 1964, when Donald Ross, FCRH ’65, ran for student government president, he was looking for a way to foster school spirit on campus, especially on weekends.

“One of the things that we really noticed during our freshman year was how flat and uninteresting the college was in terms of activities in the early fall,” Ross says, adding: “On a Saturday … there was nobody on campus except the boarders.”

Football, he figured, would be the perfect solution, and bringing the sport back became the centerpiece of his Spirit Party campaign platform. 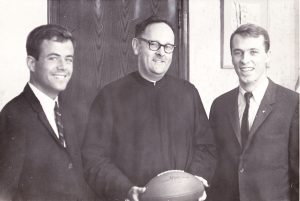 Students had tried to revive the sport before, but things lined up perfectly this time. Ross and running mate John Connolly, FCRH ’65, won the election, and because their class had organized on-campus concerts featuring some of the day’s top acts—the Kingston Trio, Ray Charles, and Peter, Paul, and Mary—they had some money to spend.

Administrators were hesitant to allow the sport to return, but the University’s new president, Vincent O’Keefe, SJ, was more open to the idea than his predecessor. And with Fordham College Dean George McMahon, SJ, in their corner, the students received permission in fall 1964 to establish and run a team on a club basis.

The Ram announced the news in its September 18 edition with a large, one-word banner headline: “FOOTBALL!”

Planning started immediately. Rugby team captain David Langdon, FCRH ’65, would serve as the team’s volunteer coach. He got the NYU club team to agree to a game at Rose Hill on November 14. An ad for tryouts drew 140 students, with 43 making the final roster. The team began practicing every day, learning a system that Langdon’s high school football coach had used.

Meanwhile, there was much work to be done off the field. Organizers estimated that staging the game would cost $18,000, and Ross, Connolly, and Langdon each loaned $1,000 to the cause. They used some of the money their class had made from those on-campus concerts, and though administrators told the students they couldn’t solicit money from alumni, they did so anyway. To earn a little extra cash, they even set up a stand on campus in which organizers would eat a goldfish for a dollar.

Ross and an army of volunteers began checking off a list of tasks: Tickets would need to be printed and sold, programs would need to be designed, and they’d need to buy uniforms, equipment, and insurance, plus refreshments for spectators. Fordham didn’t have an on-campus stadium, so they rented bleachers from a vendor in Texas that required that the students assemble and take down the structure. (They got a good deal, since the bleachers were on their way to the East Coast anyway, to be used in the nation’s capital for the presidential inauguration in January.) 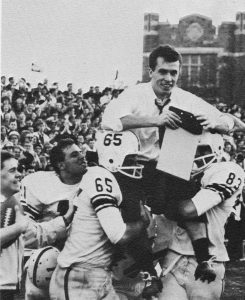 To help prepare for the big NYU game, the team traveled north to play Maine Maritime and was crushed, 42-0, the military school’s canon blasting after each and every score. But those involved with the Fordham team saw that game as a tune-up for the main event. “To me, it was all just building towards NYU,” says Langdon.

Bill Burke, FCRH ’65, LAW ’68, worked as Fordham’s sports information director as an undergraduate from 1963 to 1965. With the help of New York Giants owner Wellington Mara, FCRH ’37, he got word out to the local media. All seven New York papers covered the game, with the great Dick Young promoting it to readers of the Daily News.

By game day, all the $2.50 tickets had been sold, but to cram more people in, they offered standing room admission for a reduced fee, stamping the hand of those who otherwise would have been turned away. Of the 13,200 fans who crowded into the makeshift stadium on the clear fall afternoon, an estimated 8,000 were Fordham alumni.

The game itself was a back-and-forth affair, but an interception by Roger Dexter, GABELLI ’65, late in the fourth quarter sealed the 20-14 win for the Rams, who rang the campus Victory Bell after carrying Langdon off the field in celebration. Langdon received congratulatory telegrams from a number of established college coaches, including Darrell Royal of Texas.

Ross, who’d go on to stage large-scale events like the 1979 No Nukes march in Washington, D.C., wanted to make sure that club football lived on at Fordham beyond the fall of 1964. While he and Connolly worked with their student government successors, Langdon (who’d chosen a team without too many seniors to make it easier to build a roster the following year), used some of the profits from the NYU game to hire a coach—Jim Lansing, FCRH ’43, a former All-American at Fordham and the owner of the sporting-goods store that sold the team its pads.

Club football proved to be a success. In 1965, the team went 4-1, and three years later, the 7-1 Rams were the top club team in the country. By 1970, football was a varsity sport once again. And in recent years, some five decades after the Spirit Party campaign, Fordham has had one of the best teams in the country at the Division I FCS level.

“I think those three guys—Donald Ross, David Langdon, and Bill Burke—were just ideally suited for this task,” says Connolly, the student body vice president. “Everything went off about as well as it possibly could have.”