skip to main content
Return to Fordham University
You are at:Home»Fordham Magazine»Features»At Ram Centennial, Alumni Celebrate the Value and Virtues of Journalism
Cayenne Hughes, FCRH ’01 (right) and Kristin Nazario, FCRH ’02, GSAS ’04, at the paper’s centennial dinner. Photos by Bruce Gilbert
The Ram, Fordham’s venerable student newspaper, turned 100 in 2018. This anniversary called for a feast, and feasting there was on a wintry mid-November night in Bepler Commons on the Rose Hill campus.

Ringing the room were enlargements of front pages. They conveyed the scope of events covered by the paper across the decades: world wars, McCarthyism, civil rights, student protests, Watergate, 9/11, and more.

Then there was the front page of the very first issue of The Ram, published on February 7, 1918. The layout is crisp and the tone is serious. Alas, the viewpoint expressed by the lead headline reveals the perils of composing first drafts of history. It quotes Joseph A. Mulry, S.J., then president of Fordham, who had a reputation for fiery sermons on patriotic themes: “This War Will Purify Soul of the Nation.” 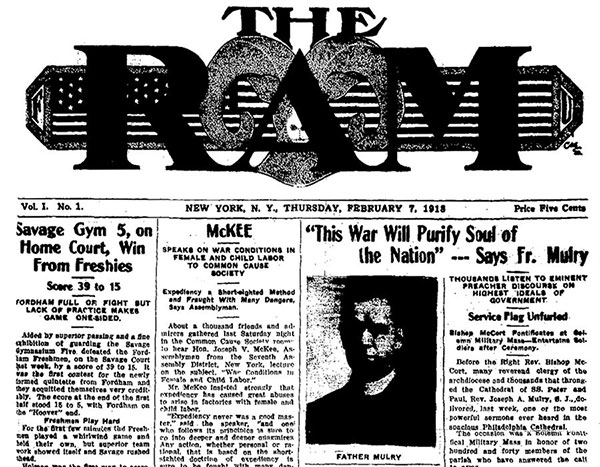 Father Mulry was referring to World War I, then deep into its fourth year, which was time enough to have figured out that rather than a rite of purification, the stalemate in Europe was more like mindlessly mechanized slaughter, an exercise in futility and stupidity. With hindsight we might forgive Father Mulry, especially given that his underlying thesis was that “no part of the body politic shall oppress another.”

Practicing the Discipline of Verification

The Ram‘s first editors were trying to speak to a cause then vital to Fordham students, some hundreds of whom were serving on or near the front and whose need for news from campus was the reason for founding a weekly in the first place. (That’s right, The Ram began as a chronicle for troops overseas of academic doings in the rural northeast Bronx.) But as any journalist will tell you, it’s often difficult to interpret events in the midst of their unfolding.

“If you’re a news reporter, you need to hope for humility,” said former Ram editor-in-chief Jim Dwyer, FCRH ’79, to more than 100 guests at the paper’s centennial dinner. “And own your own mistakes.”

Dwyer is a two-time Pulitzer Prize winner and a columnist for The New York Times who has written on everything from the Byzantine machinations of the MTA to improving care for HIV-positive pregnant women. If anyone could get away with tossing bouquets of self-congratulation, it’d be this guy on this night. Instead he extolled “the journalism of verification, where you can see the structures that hold up the stories, where sources are named and facts are corroborated.”

Journalists have a phrase for such high standards: a pain in the rear. But insofar as journalists practice them, even revere them, it’s because they came across someone early on who insisted they be followed in their novice attempts at editing and reporting—or in managing a newspaper, as slapstick and earnest an enterprise as humans have devised. For the people in Bepler Commons, that formative education would’ve occurred while scrambling on deadline to put out The Ram.

Dwyer also name-checked his former professor and long-time mentor, Ray Schroth, S.J. Beginning in the late 1960s, Father Schroth taught journalism at Fordham and other Jesuit colleges for almost 50 years. A kind of anti-Mulry, Father Schroth instructed students to question official statements from powerful people in justification of their actions—on issues ranging from potholes to low-level weed arrests to war. Not that these explanations are always wrong, just that they need to be checked.

One way journalists do this is by examining a policy’s concrete effect on the lives of non-powerful people, and then amplifying the voices of these people in the press—after checking their claims, too.

That was a theme of the speech by Louis D. Boccardi, FCRH ’58. He’s a Ram alumnus and former president and CEO of the Associated Press, the world’s largest news organization. Boccardi started his career when newsrooms racketed with the sound of manual typewriters and ended it by transitioning AP into the internet age.

“’Fairness and accuracy’ is a piety, but it’s the start of what we do,” he said. “And when we find an untruth, we should label it clearly so. In the end, our only claim on the reader’s or viewer’s attention, and on their support for what we do, is that they trust what we say.” 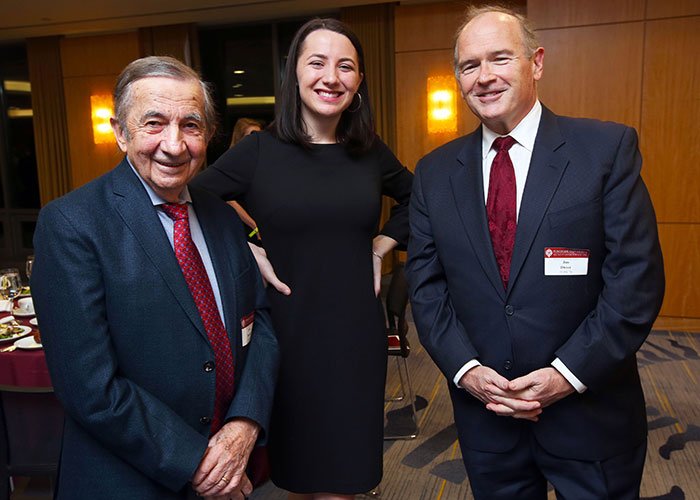 The value of telling the truth against all obstacles was another theme of the night. Solid reporting requires familiarity with the methods of pursuing truth. That’s where The Ram and its equivalents come in. Students sign up to practice the full menu of journalistic skills, from rapid fact-gathering to investigative techniques. Students then put their stories out into the world, where sometimes they stand up to scrutiny and sometimes they don’t. Either way, lessons learned.

The result can be high honors. Besides Jim Dwyer, two other Ram editors went on to earn a Pulitzer Prize: Arthur Daley, FCRH ’26, for sports reporting at The Times, and Loretta Tofani, FCRH ’75, for her Washington Post series “Rape in the County Jail.” Tofani was one of the first women to serve as editor-in-chief of The Ram. Many women have since followed her in the role.

The latest is Theresa Schliep, a 21-year-old Fordham senior and editor of The Ram’s 100th edition. Schliep presides over more than a physical newspaper. She manages a multimedia platform that, more often than not, lives up to the standard of pain-in the-rear reporting.

When asked why she goes to the trouble, she says, “It’s our right as Americans, and as people, to say what we want to say—factually and accurately.”

There it is: evidence that a new generation has submitted to the practice of digging up and offering the journalistic truth, of winning trust through verification, corroboration, and clear prose. In closing, a benediction: May they prosper as they make their mistakes and publicly correct them, and as they doggedly call the powerful to account. It’s an especially hostile time to aspire to be a journalist. God bless those who would do it.

—Jim O’Grady, FCRH ’82, a former Ram reporter and editor, is a features reporter at WNYC.

Note: An earlier version of this story incorrectly identified Loretta Tofani as the first woman to serve as editor-in-chief of The Ram. She was preceded by Mary Anne Leonard, TMC ’70, who achieved that distinction in 1969.