skip to main content
Return to Fordham University
You are at:Home»Fordham Magazine»Books»The Devil’s Mercedes in America 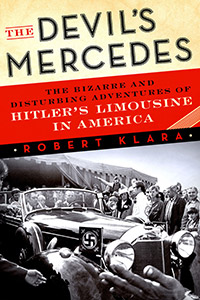 The Mercedes used by Adolf Hitler was, fittingly, a monster: an armored behemoth weighing five tons, it was 20 feet long and big enough for eight people. Its steering wheel was as big as a life preserver, its gearshift knob as big as an eight ball. When it arrived in America soon after World War II, it was greeted with revulsion but also with deep fascination. It was, after all, a relic of a mammoth historical event whose wounds were still fresh.

Robert Klara describes, in piquant detail, the American odyssey of this and another nearly identical Mercedes also manufactured for the Nazi leadership. In the decade after the war, the cars were greeted with crowds and headlines across the United States during tours that raised money for charity or for the government’s war-related expenses. They would later draw six-figure sums at auctions, helped by the nascent culture of antique car collecting. Sometimes, ownership of one of the cars brought infamy and outright threats that made the owner all too glad to get rid of it. It was often hard to use the cars for educational purposes, given the strong emotions roused by the criminal regime they signified.

The book, of course, is about more than cars; it’s also about the way people relate to big events through symbols. Given the threat Hitler had posed, and the war’s human toll, some people seemed drawn to the car for the simplest of reasons, as noted by a press report the book cites: “[T]he significant fact seemed to be: They were here and he wasn’t.”