skip to main content
Return to Fordham University
You are at:Home»Fordham Magazine»The Comedic Stylings of Saturday Night Live‘s Streeter Seidell
Above: Streeter Seidell vs. Ramses the Ram (Photos by B.A. Van Sise)
Streeter Seidell, FCRH ’05, had heard the stories about what it’s like to interview with Lorne Michaels. The legendary creator and executive producer of Saturday Night Live famously keeps job candidates waiting—sometimes for hours—before bringing them in to discuss what is invariably their dream job. And so as he awaited his own interview with Michaels for a staff writing job in the summer of 2014, Seidell settled in with one of the books he’d brought along when, much to his surprise, he was called in after just 10 minutes.

“It was terrifying,” Seidell says. “Not because of anything Lorne did, but just because he’s Lorne Michaels.”

That summer, Seidell had been going to a lot of Mets games, and though he says Michaels asked a couple of comedy questions, they also talked a lot about baseball.

“He talked about how the Mets weren’t great, because there was no expectation of excellence on the Mets, whereas on the Yankees there is,” Seidell says. “I think he was probably using this to talk about SNL, because I remember him saying, ‘If you’re not excellent on the Yankees, then you’re not a Yankee for very long.’”

Looking back, Seidell realizes that meeting with Michaels is the last step of a thorough hiring process—a step that exists so Michaels can be sure “that you can conduct yourself around people with some level of chill.” But at the time, he says, “I left there being like, ‘I don’t know. We just talked about baseball. I think I blew it.’”

It turns out he didn’t blow it. He got the job, and like a ballplayer who’s proven his worth, he’s stuck around: In May, he finished his fourth season as a writer for the show. 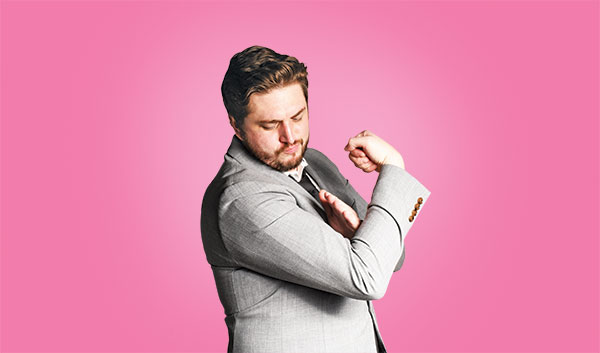 ‘The Last Place on TV You Can Bomb’

Seidell began performing stand-up in Manhattan during his sophomore year at Fordham. He started writing for the website College Humor in 2004, and eventually worked his way up to become the site’s editor in chief. That job became a springboard to other opportunities, including working on shows for MTV and writing on a sitcom in Los Angeles.

But his dream job was always to write for SNL. He grew up watching the likes of Will Ferrell, Molly Shannon, and Cheri Oteri on the show—part of a childhood comedy diet that also included Adam Sandler records and John Candy movies. Some of the first laughs he got as a kid were the result of simply repeating lines from his favorite SNL sketches. (“I live in a VAN, down by the RIVER.”) And so after Sarah Schneider, a friend from College Humor, was hired to write at SNL in 2011, Seidell began applying as well, sending in packets of sample sketches whenever the show put out a call for submissions. He applied four times before finally getting the job.

And though Schneider had given Seidell a heads-up about what he was in for once his first season began, he says nothing can truly prepare you for it. “It’s like someone telling you what skydiving is like,” he says.

Indeed, he quickly learned how grueling the schedule would be: pitches on Monday, a marathon writing session on Tuesday into Wednesday, a table read of potential sketches later that day, rewrites on Thursday, and rehearsals on Friday. All of that builds to a long day on Saturday—an occasion Seidell marks each week by forgoing his usual casual wear in favor of a suit and tie.

Seidell is the first to admit that writing a great sketch that kills on air is hard. Some sketches he works on in a given week won’t even make it to dress rehearsal, and sometimes a sketch just doesn’t work even if it does make it to the live broadcast. But that’s part of the job’s appeal. “This is the last place on TV you can bomb, which adds to the pressure, which I find motivating,” Seidell says from the office he shares with writing partner Mikey Day on the 17th floor of 30 Rockefeller Plaza, nine floors above the fabled studio 8H. Tacked to a bulletin board above his desk are cue cards from sketches Seidell co-wrote that most definitely did not bomb, including “FBI Simulator,” which features Larry David as a lifelike weirdo target-practice dummy in an FBI training exercise. 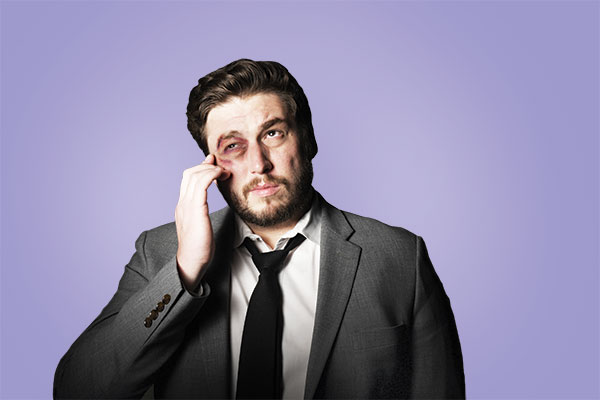 Satire vs. Silliness for Silliness’ Sake

The entire office is decorated with props and mementos from memorable sketches Seidell co-wrote. A cue card from “Close Encounter,” in which Kate McKinnon explains that she was not “dealing with the top brass” during her abduction by aliens, hangs in a frame in the office’s corner. There’s a pizza-guitar prop from a sketch featuring Aziz Ansari in a Chuck E. Cheese’s-like restaurant, an illustration of Chance the Rapper from a sketch in which he plays an out-of-his-element hockey announcer, and, near the door, a fan-made poster depicting perhaps Seidell’s most famous sketch: “Haunted Elevator,” written with Day and Bobby Moynihan and starring Tom Hanks as David S. Pumpkins, a confusing character who repeatedly appears in a Tower of Terror-type ride wearing a jack-o’-lantern-print suit. The 2016 sketch blew up after the show aired. Not only did it lead to some media appearances by Seidell, it served as the inspiration for a kids’ Halloween special that aired last fall.

Seidell suggests the timing of the episode helped it go viral. “My personal theory is that it was right before the election, and the rhetoric was really harsh on both sides. I think it was the last safe thing to talk about with your friends and family who disagree with you politically.” (It also didn’t hurt that Hanks, in Seidell’s words, “just went for it,” fully committing to the goofy character.) 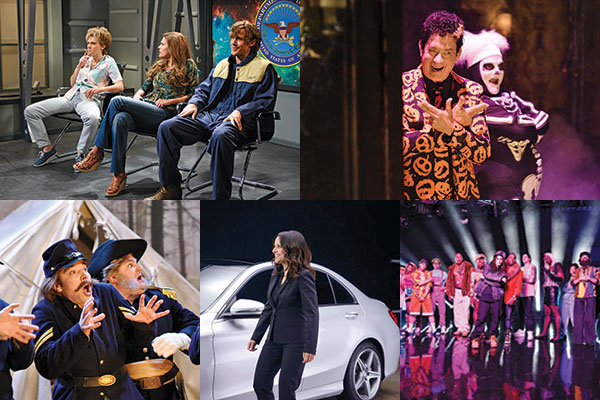 A collection of still images from some of the skits Streeter Seidell has had a hand in writing for SNL. (Images: NBC/Saturday Night Live)

It’s fitting that “Haunted Elevator” became Seidell’s most buzzed-about sketch, as it’s representative of the type of sketch he most prefers to write. It’s impossible for an SNL writer in 2018 to ignore politics, as the current administration has provided fodder for many sketches over the past two years. Seidell, for instance, pitches in by co-writing appearances by cast members portraying President Trump’s sons Donald Jr. and Eric. But he is most interested in writing sketches that aren’t tied to the news cycle at all, particularly when they’re a little on the weirder side.

“There are a lot of [comedy shows] that just sort of say something everyone agrees with, and they’re aiming for applause and not laughs,” Seidell says. “But as a writer, I just find that boring. This show’s always been a balance of political stuff versus just baldly funny stuff. I’ve just always favored silliness. I’ve always just gone for a laugh over some stinging political critique.”

That’s not to say that topical sketches can’t be silly—or that they can’t appeal across the political spectrum. With Day, for instance, he co-wrote a commercial parody for “Levi’s Wokes,” comically ugly, ill-fitting jeans described as “size-less, style-neutral, gender nonconforming denim for a generation that defies labels.”

“I feel like I found a creative soulmate in Streeter, so I’m very lucky that he got put in my office that first season,” says Day, who joined the show a year before Seidell. “We share an odd sense of humor, and there’s few people there who are as crazy as I am to start writing something new at like 4 or 5 a.m. out of nowhere.” 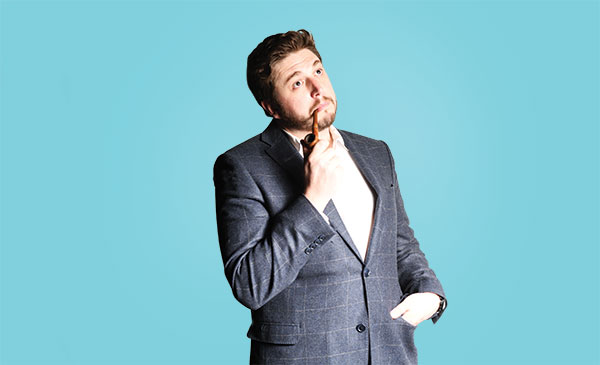 A Seat at the SNL Kids’ Table

SNL‘s schedule of intense show weeks combined with downtime in the summer has allowed Seidell to work on other projects, including the David S. Pumpkins special last year. And he says he’d be interested in working on a bigger project like a film at some point, in addition to continuing with some stand-up dates, though his time away from the show also lets him spend more time with his wife and 2-year-old son.

In the meantime, he’s laser-focused on SNL. Since being hired, he’s added the title of writing supervisor, which means he not only writes sketches but also helps decide which ones make the show. “You have a seat, maybe not at the big-boy table, but at the kids’ table,” he jokes. It also means more opportunities to learn from Lorne Michaels. “It’s like if you were a baseball player and you get to talk with Babe Ruth,” Seidell says. “He’s maybe the most important person in American comedy, maybe ever.” Seidell pauses, then laughs. “And he wasn’t even born in America.”

Michaels, after all, has been producing groundbreaking sketch comedy for generations. “My parents told me growing up, ‘This is the funniest show,’” says Seidell, who made it his professional goal to be a writer there, preferring it over other beloved programs like The Late Show. “If you want to write comedy, this is the place to be.”

—Joe DeLessio, FCLC ’06, a social media editor at New York magazine, is a frequent contributor to this magazine.