skip to main content
Return to Fordham University
You are at:Home»Fordham Magazine»Books»The Bodies We Were Loaned 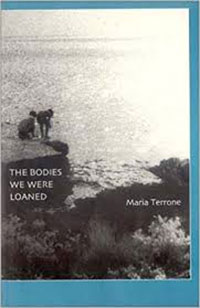 The Bodies We Were Loaned by Maria Terrone, TMC ’72 (The Word Works)

In the poem “A Question Between Waking and Sleep,” Maria Terrone wonders, “if / memories of the places / we knew were to depart / one by one, tiptoeing out / like restless house guests, / which would be the last to go”?

Springing from an ardent desire to bear witness to what has passed and what is passing, imbued with an acute sense of impermanence, the poems that fill The Bodies We Were Loaned are memorable and moving, eloquent testaments to life’s fleeting joys, frequent sorrows, and endless mysteries.

In “Firewalking Through November,” Terrone contemplates the autumn leaves that have “nowhere to go but down. Yet the few gold leaves / that still hang on the trees / are now back-lit / to a transparency / you could pass through / not just unharmed but warmed.”

“Ghost Frescoes” finds Terrone’s speaker in Verona’s Basilica of San Zeno Maggiore, describing the “last remnant of a man fading / to white dust” in a 900-year-old fresco, an image that appears in sharp contrast to that of the basilica’s 14th-century saint who has endured years of “plague and war”: “Yet so vivid / are his blue and russet robes, / he glistens—a refugee // from a sun shower / who’s arrived dripping wet, an idea / fresh from the brush of his maker.”

Other poems celebrate the toil of blue-collar workers or reveal and lament the psychological scars of war veterans (some “burned / with the tattoos of hatred, / others cauterized to forgiveness”). Still others illuminate the poet’s own experiences and the lives of her family members. There are poems about her e-mail exchanges with a brother in snowy Vermont, the love letters her father sent to her mother from the battlefields of Europe during World War II, and the lipstick and powder in her mother’s makeup box.

In “Garden of the Impossible,” the poet’s father, suffering from Alzheimer’s, “walks stiffly” through a sculpture garden. As he touches the sculptures, the poet watches from a distance, “wishing / his craftsman’s hands recall / what his mind may no longer grasp— / that even the most obdurate / matter can bend to a man’s will.”

A lifelong New Yorker, Terrone also captures classic city scenes in poems like “Gulls and the Man,” in which she describes a construction worker “perched high on a girder of the Whitestone Bridge.” In “Under Lexington Avenue,” she describes a crowded subway train that “shudders into stillness” in the dark tunnel between stops before it “groans awake.” Another poem, “The Passage,” is in part a kind of paean to the immigrant “sandhogs” who built New York City’s subway system a century ago: “They’ve arrived, shoulders sloped / as if the men themselves were ballast— / a gritty mass laid down at the foundation / of what will surely rise.”

Terrone’s work has appeared in more than a few national literary magazines, and it is no surprise that she has received several honors (including the 2001 Willow Review Award in Poetry and the 2000 Elinor Benedict Poetry Prize from Passages North). Most recently, she contributed several poems to The Milk of Almonds: Italian American Writers on Food and Culture (The Feminist Press, 2002).

Enriched by attentive and disciplined observation, the poems in The Bodies We Were Loaned are cleverly crafted, yet refreshingly devoid of pretense; they are accessible without being facile. In this debut collection, Terrone proves herself a poet of fragile beauties who has the scope and understanding to evoke various mental, emotional, and physical landscapes.