The Queens native joined the Teamsters Union Local 810 in 1990, when he began working as a refrigeration engineer in facilities management at New York University. He later served as shop steward for nearly a decade, assisting in grievance processing and collective bargaining. He also caught “the academic bug,” he says, earning a bachelor’s degree in history at NYU in 2003 and a J.D. in the evening program at Fordham Law School in 2008—all while working full time and raising a family with his wife, Dalia.

“I saw the benefit of representing my co-workers, and that was my catalyst for wanting to go to law school,” he says. “I liked the idea of representing them and realized it was my calling. It just felt natural.”

After graduating from Fordham Law, he left his union job and landed a coveted spot as a first-year associate at the international law firm Proskauer Rose. Bad timing: Not long after he started in September 2008, Lehman Brothers filed for bankruptcy, setting off a global economic crisis that prompted Proskauer to lay off many junior associates, including Torres, by December of that year.

“Naturally I was devastated,” he recalls. “Just like that, I’m out of a job. I worked for the union, never missed a beat, and now I’m realizing, ‘Wow, I’m really more vulnerable than I thought I would be.’ I had three young children. I didn’t know what I was going to do.”

He didn’t languish for long. In early 2009, Torres seized an opportunity to return to his roots: He was recruited to rejoin the Teamsters Local 810, based in Long Island City. Only this time he wouldn’t join as a member but as general counsel.

Now, in part out of gratitude for the union that gave him the job security to pursue higher education and land a job he loves, Torres has published a storybook drawn from his own experience.

Good Guy Jake aka Buen Chico Jake (Hard Ball Press, 2017) is an illustrated children’s book, published in both English and Spanish on the same page. 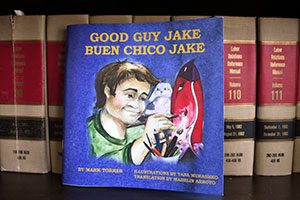 In it, Torres tells the story of a city sanitation worker who has been violating company rules for years by taking toys from the trash along his route. He doesn’t do it for himself or for profit, though. He fixes the toys and brings them to a local children’s shelter so the kids there can have presents at Christmastime.

But one December, just before the holiday, Jake’s manager receives a complaint that Jake has been violating company rules, and he says he has no choice but to fire him.

Hoping to get his job back, Jake, a member of the fictional United Street Cleaners Union, asks his union rep to file a grievance with the company. Eventually the case goes to arbitration, where a judge must decide whether Jake deserves to lose his job or whether some other disciplinary action might be more appropriate and lead to a happy ending for all.

Torres says he wrote Good Guy Jake after Tim Sheard, the publisher of Hard Ball Press, asked him to collaborate on a book that would help explain the modern-day labor movement in a way that would resonate with children. The idea was to tell “a story that was captivating,” Torres says, “as opposed to a manual or a historical document.”

“In some respects, it was easy because [I was writing about] what I do every day representing employees,” he adds. “But it was difficult because you’re writing for children, and you have to explain terms like arbitration.”

Torres says that as a kid growing up in Woodside, Queens, he and his two older brothers didn’t give much thought to the labor movement or arbitration matters. It wasn’t until later in life that he came to understand what unions have meant to his family’s livelihood. His father, he learned, was a member of the Teamsters.

“He was a driver for Drake’s Cakes,” Torres says, referring to the maker of sweet snacks like Devil Dogs and Yodels. And he notes that his two older brothers have benefited from union membership, too. One is a retired New York City police officer and former Patrolman’s Benevolent Association delegate; the other is a former Teamster who now works as a union carpenter for the New York Fire Department.

As he worked on the manuscript for Good Guy Jake, though, Torres relied less on his brothers than on his two younger children, Jake, 11, and Olivia, 10, for critical guidance.

Torres also took seriously the complexity of Jake’s story. It’s not a straightforward tale about a milestone or goal of the labor movement, like the 20th-century push for the eight-hour workday or the modern-day Fight for $15 campaign. 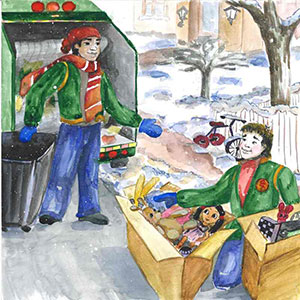 “Technically, Jake broke a rule, right? We don’t want to teach children that it’s OK to break a rule, you get a pass,” Torres says.

“But in this world, there are mitigating circumstances, there are factors that arbitrators look at and [consider when determining whether or not to] adjust the discipline. And that was a true nuance of the story—to explain that an arbitrator has some leeway but to still help young children understand, you’ve got to follow the rules [and there are consequences if you don’t].”

“One of my greatest mantras to management is that discipline is meant to teach, not punish,” he says. “Don’t get mad at someone because he or she slipped on a job or made a mistake. Teach them, don’t do this again. It gives them a second chance.

“And when you [offer] that leniency and that courtesy, you’re helping someone’s livelihood. You’re also helping morale, and you’re helping business in general.”

The book includes a series of questions at the end to guide teachers and parents in talking about the story with children. Torres says he was especially grateful to have the opportunity to read the book to his daughter’s fifth-grade class.

“I asked them, ‘Do you think Jake would have gotten his job back if he wasn’t in a union?’ And they all said, ‘No.’ To me that was so powerful, that they realized how a union helped this guy.

“One of the things I told them, I said, ‘Your teachers are union workers. Your parents may work in factories or offices; everyone has rights on the job. [Jake’s story] is just one example.’”

The publication of the book last fall coincided with the devastation wrought by Hurricane Maria. Afterward, Torres said he and Sheard connected with the Puerto Rico Teachers Federation in San Juan.

“They said, ‘Look, this hurricane destroyed us; we’ve lost all our books,’” Torres says. So he and Sheard donated 200 copies. “I remember the first pictures that came in, some of them were of special-needs children reading copies of the book, and it brought a tear to my eye.”

Challenges and Hope Ahead

Torres is realistic about the serious challenges facing unions today—declines in membership; troubled pension funds; automation, robotics, and other technology-driven changes in the workplace; not to mention legal challenges, like the current Supreme Court case Janus v. AFSCME, that threaten to limit the power and influence of public-employee unions.

But he remains hopeful.

“Strangely enough, I see a lot of the political climate almost driving people more toward wanting to be in a union. I see hope there,” he says. “I also think social justice and labor are merging, where it’s no longer just ‘those union workers’ who are affected; it’s everyone, it’s all of us.” 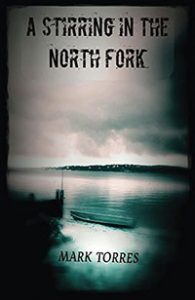 Torres says he plans to continue writing books. Good Guy Jake isn’t his first. In 2015 he self-published A Stirring in the North Fork, a thriller featuring Savoy Graves, an out-of-work attorney who tries to get to the bottom of a 40-year-old unsolved murder on Long Island. The book is marketed entirely through social media, Torres says. “The readers have been incredibly enthusiastic. Within a year of its release, readers have posted pictures of the book on every continent on Earth.”

He’s working on a follow-up novel, and he hasn’t ruled out writing another children’s book. But fiction writing is a creative outlet, he says, not something he’s looking to do “as a way out” of his day job.

“I have no illusions. I love what I do. And I often say that I’m an attorney in practice, but at heart I’m a Teamster with a law degree,” he says. “That’s something I’ll always be.”