skip to main content
Return to Fordham University
You are at:Home»Fordham Magazine»Teaching Life Lessons Through Football: A Conversation with Fordham Jubilarians Joe Moglia and Joe Moorhead
Joe Moglia, FCRH ’71, and Joe Moorhead, FCRH ’96. Photos courtesy of Joe Moglia and the University of Oregon
Joe Moglia, FCRH ’71, and Joe Moorhead, FCRH ’96, have a lot in common: Aside from sharing a first name and lofty statures in the world of college football, the two Fordham alumni will be celebrating milestone graduation anniversaries—a 50th for Moglia and a 25th for Moorhead—during Fordham’s virtual Jubilee Weekend, June 4 to 6.

Both Moglia and Moorhead have found a great deal of success since their undergraduate days at Rose Hill. Moglia coached both high school and college football after graduating in 1971, but in 1984, he made a career change to finance, working at Merrill Lynch for 17 years before being named CEO of Ameritrade Holding Corp. (now TD Ameritrade) in 2001, leading the company to record earnings performance. He returned to coaching in 2009, finishing his career with six seasons as the head coach at Coastal Carolina University, where he led the team to a 56-22 cumulative record and three Big South Conference titles before stepping down in 2019. He is currently executive director for football and executive advisor to the president at Coastal Carolina and is chairman of Fundamental Global and Capital Wealth Advisors. Moglia was recently honored with a Fordham Founder’s Award, and later this year he will be inducted into the Fordham Athletic Hall of Fame. 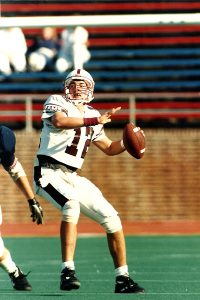 Joe Moorhead, FCRH ’96, during his days as a quarterback for the Rams. Photo courtesy Fordham Athletics

After playing quarterback and setting multiple records for the Fordham Rams from 1992 to 1995, Moorhead played professionally for a year with the German Football League’s Munich Cowboys and began his coaching career as a graduate assistant at the University of Pittsburgh in 1998. After several more assistant jobs, Moorhead returned to Fordham for his first head coaching gig in 2012. In four seasons, he turned the struggling program around, leading the Rams to three NCAA Division I Football Championship Subdivision postseason appearances, a Patriot League title in 2014, and a 38-13 cumulative record. After Fordham, Moorhead took the offensive coordinator position at Penn State University, followed by the head coaching job at Mississippi State University and, currently, the offensive coordinator and quarterbacks coach role at the University of Oregon.

In honor of their Jubilee years, they spoke with Fordham Magazine about how their alma mater impacted their lives and careers, and what makes Fordham special to them.

How did your Fordham education shape your approach to leadership, coaching and mentoring student-athletes?
Moglia: I was a father when I began at Fordham, so my freshman year, I had to give up sports and I was responsible for 100% of my education, and I had to support my wife and daughter. So that first year I drove a truck for the post office and a yellow cab in New York City. Fordham Prep offered me a coaching job, so my sophomore, junior, senior year, during the season, I coached ball, and in the offseason, I worked for my dad. I give that background because not too many freshmen had a more difficult freshman year than I did, and not that many students had more demands on their time. I think laying a foundation about not making excuses and taking responsibility for yourself has become very much my leadership philosophy. Treat other people with respect, live the consequences of your actions. The way I lived at Fordham and the philosophy of our Jesuit education laid the foundation for that.

Moorhead: As Coach Moglia mentioned, when you’re dealing with 18- to 21-year-olds, you’re an extension of the foundation that their parents have built, and you’re in charge of them to help them become a better person, better student, and a better player. I think the embodiment of that idea of the development of the whole person, as well as learning how to think and communicate, are the two biggest takeaways from my time at Fordham.

What does your Jubilee mean to you? 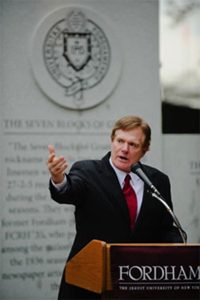 Joe Moglia, FCRH ’71, at Rose Hill in 2008 for the dedication of the Seven Blocks of Granite monument in front of Coffey Field, which he helped make possible. Photo by Ryan Brenizer

Moglia: With the 50th, the Golden Jubilee, I’ve got five decades of living my life on a foundation that was built when I was at Fordham. I love our University and I take tremendous pride in that. You look back 50 years. It’s hard for me to believe that time has gone by. But for me, the Jubilee is a representation of five decades of my life personally and professionally, in two career spans. I’ll always be indebted to our University for that.

Moorhead: I think of the relationships. Calvin Hargrove, who was one of my receivers, literally just texted me this morning, checking in to see how I’m doing. All the guys I played with, we still keep in contact. And not even necessarily football players, but all kinds of people from your experiences as a student. And then all the kids I had the fortune to coach. Not just [ones like]  Chase Edmonds who have gone on to great careers in the NFL, but guys who become great husbands, great fathers, great business leaders who made an impact on their community. I think of those 25 years and some of the things that you can put in a frame or put up on a wall—those things are great, but they gather dust and they fade with time. But the one thing I think is the most long-standing and most impactful is the relationships over that time.

You’ve both coached at other colleges. What do you think makes Fordham a unique place?
Moglia: What sets Fordham aside, I think, is the mantra: “New York is my campus. Fordham is my school.” No other university I’ve been at has had that unique combination of culture and education. All the things go on New York City. And there are so many things that are a piece of that. Fordham is a greater university because of its connection to New York City. And I believe New York City is a greater city because of its connection with Fordham.

Who’s the Fordham grad or professor that you admire the most?
Moglia: Fordham’s had so many incredible grads that have had success in so many different fields. But to be consistent for me and my life, I began my entire life as a coach, so it’d have to be Vince Lombardi. Lombardi was a graduate of Fordham. He’s an Italian guy. His parents were butchers. There were so many connections there for me. But at the end of the day, he was a great coach.

Moorhead: Yeah, I agree with coach. Obviously, Vince Lombardi as a graduate. And Richard Giannone, Ph.D., professor emeritus of English. He was one of my English professors at Fordham, and I thought he did an incredible job. And then, from my time there as a coach, the opportunity that Fordham president Father McShane and athletic director emeritus Frank McLaughlin gave me—those are things for which I’ll be forever indebted.