skip to main content
Return to Fordham University
You are at:Home»Fordham Magazine»Alumni News»Tackling Life After Football

Mike Andrews, GSB ’09, didn’t have much playing time as part of the Fordham football team’s offensive line, and he struggled to find steady work after graduation, but that didn’t block his drive to give back to the University.

“My football career was famously eight plays. I did a better job helping guys academically than helping the team athletically,” says Andrews, “but I always felt part of the team.”

With the help from a former teammate, Marcus Taylor, GSB ’07, who worked in recruiting, Andrews found a position at Brookfield Investment Management, which later led to Carey Financial LLC, where he now works on the compliance and product development team.

From a bonus check earned at Brookfield, Andrews wanted “to give back [to Fordham] in any way I could.” He made a $10,000 gift to the Fordham football program to develop and fund the SL Hudacek Fordham Football Mentoring Program, which pairs every current player with a former player.

“It’s a nice way of thanking [the football] program that helped me,” says Andrews.

Andrews’ grandfather Stephen L. Hudacek, a coal miner from Plymouth Rock, Pennsylvania, was a tackle on the Fordham football team. Known as the “Plymouth Rock,” Hudacek suffered a career-threatening head injury during a 1939 game versus Tulane, but returned with a redesigned helmet for spot duty on the 1941 Cotton Bowl squad. “Kind of a rock head,” says Andrews. “A lot of people say he was the rock of the team. He was the rock of the family in many ways.” 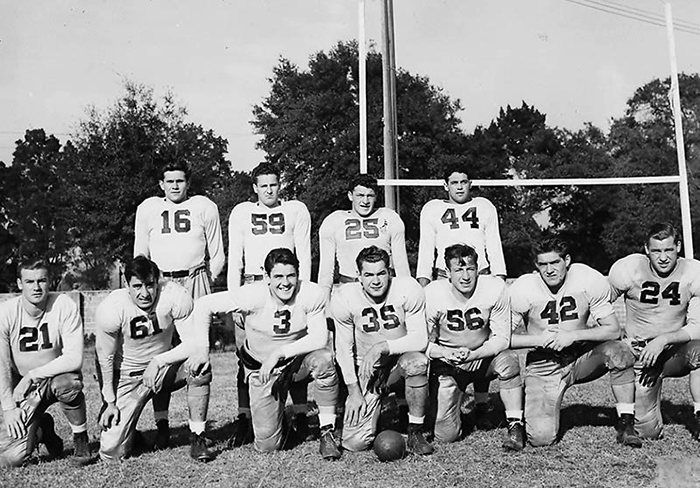 No. 42 Stephen L. Hudacek, with his Fordham teammates before heading to the 1942 Sugar Bowl.

After graduating from Fordham in 1942, Hudacek went on to medical school and later served as chief of surgery at hospitals in the Wilkes-Barre, Pennsylvania, area. Tragically, in 1969, while on a family vacation, Hudacek, his wife, his brother and his wife, and 15 others died in a plane crash in the mountains of Puerto Rico.

Andrews’ mother, Rennie, was 18 at the time. The loss was hard on her, her older sister, and her younger brother, who were left orphaned. “It was [also] tough on the community,” Andrews says, “My grandfather was known for helping the coal miners get disability and a lot of people loved him for it.”

Hudacek was posthumously inducted into the Fordham Athletics Hall of Fame in 1988, when Andrews was 2 years old.

When Andrews made the decision to attend Fordham, his mother was excited and comforted by his choice. “She said it’s nice to know that’s where you’re going.”

Rennie Andrews says she was “thrilled” with her son’s college choice. “MJ was being recruited by several schools for football but I secretly hoped all along that he would choose Fordham. It was a wonderful experience for MJ and for our family.”

While Andrews and his grandfather had different football experiences at Fordham, the sports program meant a great deal to both. Naming the mentoring program after his grandfather was “a nice gesture to him and my mom,” says Andrews.

He worked with Greg Marmaros, director of football operations, to create the SL Hudacek Fordham Football Mentoring Program as a program that would supplement Fordham athletics’ Career Night, in which student-athletes network with alumni. Andrews says that many players found the annual event useful but a bit intimidating. “You’d get resumes that would say ‘vice president of XYZ’ and here you are a sophomore, like ‘how am I supposed to talk to this guy?’” 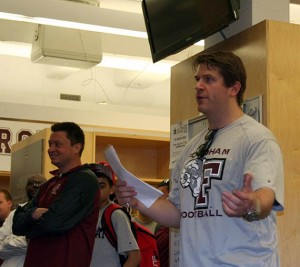 They envisioned the mentoring program as “just guys talking to other guys,” says Andrews. “We wanted to give guys another outlet that wasn’t an administrator, teacher, or a coach. Someone who had walked this path, who had lived this experience.”

In less than a year of existence, the mentoring program has hosted a meet and greet after the football spring game, a preseason barbecue for the senior class, and a get-together before the Homecoming game. Mentors have also attended practices during summer camp and regular season games. In the works is an event to focus on professional skills, including resume writing, how to prepare for an interview, and how to write an effective thank-you note. They also encourage the students and the alumni to maintain regular communication. “It’s very much a two-way street,” says Andrews.

The 23 mentors include recent graduates and alumni with more than two decades of career experience. Andrews and Marmaros match the student-athletes with the mentor-alumni based on a number of factors of compatibility: football positions, career interests, home states, and personalities.

“It has been really rewarding,” Andrews says of the mentoring program and of sharing his grandfather’s legacy. “No one loved Fordham football more than my grandfather.”