skip to main content
Return to Fordham University
You are at:Home»Fordham Magazine»Alumni News»Susan Lucci to be Honored at Marymount Reunion During Jubilee Weekend
Susan Lucci as the character Erica Kane during a dream sequence in a 1988 episode of All My Children (Photo by Ann Limongello/ABC via Getty Images)

Susan Lucci, MC ’68, best known for playing the vixen Erica Kane on All My Children—and for receiving a record 19 Daytime Emmy nominations before finally winning the award for best actress in 1999—will soon stand at another awards podium.

On June 6 at Fordham, the Marymount College Alumnae Association will recognize Lucci with its Alumna of Achievement Award.

Lucci, in turn, is grateful for the lasting impact of her Marymount education, which she says, “I use every day in my work.”

“We were learning from people who were actually working in the business. It was a great department and a great opportunity.”

She let the whole world know her gratitude for her acting teachers during a heartfelt speech at the 1999 Daytime Emmy Awards. Lucci named several mentors “who were so good at teaching and helped me to grow,” including Ron Weyand. The Obie Award-winning actor, who died in 2003, taught at Marymount for 40 years.

“He was an amazing teacher. Tough love. Tough love. And that was good,” Lucci says. In her bestselling memoir, All My Life (HarperCollins, 2011), she wrote: “Mr. Weyand wasn’t just a great teacher—he was also sensitive to us as people.” He spoke of the challenges of building an acting career and advised the lucky ones who made it, ‘[D]on’t allow yourself to become so … removed from humanity that you can no longer experience and express humanity.’

His advice stuck with Lucci, who landed the role of the dynamic Erica Kane less than two years after graduating from Marymount. 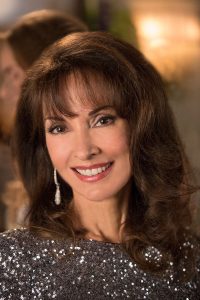 “She was a very modern heroine,” Lucci says of her signature character. “She was the troublemaker, but there was so much humanity that I saw on the pages that [All My Children producer] Agnes Nixon wrote that, to me, it was a part that I could really sink my teeth into.”

All My Children went off the air in 2011, but in the long-running show’s final year, another member of the Fordham family joined the cast. Christina Bennett Lind, FCLC ’05, assumed the role of Erica Kane’s daughter, Bianca Montgomery, when actress Eden Riegel left after 10 years in the part.

“She had a very difficult thing to do, to step into that role,” Lucci says of Lind, “and she did it beautifully.”

Lucci soon found another close cast and crew when she joined Devious Maids in 2013.

“It’s a love fest, just like it was with All My Children,” she says of the Lifetime series.

Lucci plays the wealthy, naive Genevieve Delatour—a kind of “cousin of Erica Kane” is how the show’s creator, Marc Cherry, described the character to Lucci.

The show’s third season premieres several days before Lucci comes to Jubilee for the Marymount reunion, where she will be honored alongside two of her fellow alumnae. Mary Donohue, MC ’79, will receive the Gloria Gaines Memorial Award, and Kay Delaney Bring, MC ’60, will receive the Golden Dome Award.

The ceremony will take place in Butler Commons, the space on Fordham’s campus that honors Mother Marie Joseph Butler, RSHM, who founded the all-women’s Marymount College in Tarrytown, New York, in 1907. Since the college closed in 2007, Marymount alumnae and friends have gathered regularly at events and reunions hosted by Fordham.

Lucci dedicated a chapter of her memoir to her time at Marymount, calling it a “wonderful life experience” of meeting lifelong friends from all over the world and learning from accomplished teachers.

“Study with the best,” Lucci writes, recalling her father’s advice, “and it was reiterated during my studies at Marymount.”