skip to main content
Return to Fordham University
You are at:Home»Fordham Magazine»Books»Strange Glow: The Story of Radiation 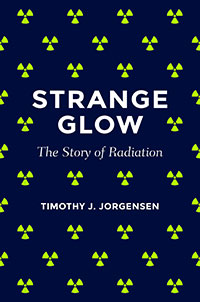 Timothy Jorgensen is a scientist with a knack for narrative storytelling.

In Strange Glow, he relates the history of human experience with radiation—from William Roentgen’s 1895 discovery of X-rays to the recent Fukushima Daiichi nuclear power plant accident—in a style that’s largely free of scientific jargon and full of subtle humor and practical wisdom. He recounts the “hard-won lessons of how radiation helps and harms our health,” focusing not only on pioneering scientists like Roentgen, Thomas Edison, and Marie Curie but also on victims of the Fukushima disaster and the tragic story of the “radium girls,” factory workers who created glow-in-the-dark watch dials by using a fluorescent paint that contained radium.

Finally, and most practically, Jorgensen, a professor of radiation medicine and the director of the Health Physics and Radiation Protection Program at Georgetown University, addresses the risks of radiation exposure related to everyday cellphone use, diagnostic X-rays, full-body security scans, nuclear fallout, and the food we eat.

To ask whether a form of radiation is safe or dangerous misses the point. The question, Jorgensen writes, is whether or not the risk level is low enough that we shouldn’t be concerned—and not everyone has the same tolerance for risk. So his goal is not so much to dispel our fears of exposure but to present the facts as evenhandedly as possible.

“This book,” he writes, “seeks both to convince people that they can be masters of their own radiation fate, and to empower them to make their own well-informed decisions about their personal radiation exposures.”