skip to main content
Return to Fordham University
You are at:Home»Fordham Magazine»Sports Producer Builds Career from Rose Hill to Citi Field and Beyond
John Furlong will receive WFUV’s Bob Ahrens Award for Excellence in Sports Journalism on Nov. 1. (Photo by Dana Maxson)
On a recent Sunday night, John Furlong had a fairly typical workload for a college student: a paper to finish for his TV News Innovators class, and another to start for his Journalism Ethics class. His Sunday afternoon, however, was anything but typical.

As one of the Mets beat reporters for WFUV, Fordham’s public media service, Furlong spent the day at Citi Field. He watched from the press level as the Nationals beat the Mets, 3-2, then rushed down to the interview room for Mets manager Terry Collins’ postgame press conference, and headed to the Mets clubhouse to collect audio from players Jacob deGrom and Seth Lugo before choosing the best sound bites for FUV’s Monday morning sportscast.

In the past few years, Furlong has taken on myriad roles at WFUV, and on Nov. 1, at the station’s annual On the Record fundraiser, he’ll receive the Bob Ahrens Award for Excellence in Sports Journalism.

The award, given annually to a member of the WFUV sports staff who’s excelled on and off the air and demonstrated strong leadership ability, bears the name of the station’s longtime executive sports producer. Ahrens, who retired earlier this year after two decades at WFUV, currently serves as a consultant during the transition to his successor, Rick Schultz, FCRH ’98.

Furlong says he’s honored to be chosen, and that it’s especially meaningful because of the award’s namesake. “Bob Ahrens has been a second father to me at Fordham,” he says. “He’s been a mentor to me, in and out of the studio.”

Preparing to Work Alongside the Pros 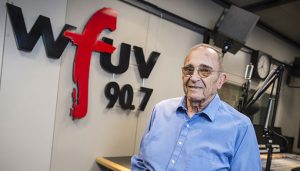 Furlong initially chose Fordham for its swimming team, and he competed for two years, but he knew he ultimately wanted to go into journalism. During his sophomore year, he came across WFUV’s table at a club fair. Impressed by the professional nature of the station, he signed up.

Like all members of the WFUV sports department, Furlong learned the ropes during an intensive year-long training program. In one semester, students learn the basics of radio production, like how to use the station’s recorders and computers. In the other, they rotate through various roles in a mock talk show, getting experience as a host, update anchor, producer, and engineer. And that’s all on top of workshops and informal conversations that teach students how to conduct themselves with professionalism in the press box.

“The standards we’re teaching are not college standards,” Ahrens says. “They’re professional standards. Because those are the standards by which they’re going to get judged when they get out of here.” 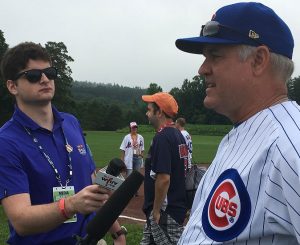 By the end of his training, Furlong began to get involved in actual WFUV broadcasts, both as a producer and in an on-air role. He also landed his first internship, with CBS New York. During his junior year, he started working on Fordham football broadcasts, then landed another internship, this time with SNY.

As the year went on, his role continued to expand at FUV: He traveled with the men’s and women’s basketball teams and served as the field engineer on those broadcasts. He did play-by-play for Fordham’s baseball, soccer, and water polo teams. And at the start of the 2017 baseball season, he was named one of the station’s two Mets beat reporters, covering roughly half the team’s home games as well as events like this summer’s Baseball Hall of Fame induction and the 2017 MLB All-Star Game.

As summer turned to fall, Furlong was preparing to switch to sharing the Islanders beat at FUV, while also working as a field producer and color commentator on Rams basketball games. He’ll have a hand in FUV’s One on One sports talk show, which airs on Saturday afternoons and Wednesday evenings, alternating between hosting and working on the production side. He’s also helping lead this year’s training program for the next group of WFUV staffers.

“John assumes a lot of the coaching and teaching roles with the younger students coming into the sports department, because I think he felt that that’s what was done for him,” says Schultz.

This winter will bring another golden opportunity: Furlong will travel to South Korea to work as a production assistant for NBC Sports during the Winter Olympics in Pyeongchang.

“Every door that has opened to me in my career has been opened by WFUV,” says Furlong, who wants to work on the production side of broadcasting when he graduates. Looking ahead, he says the training and experience he’s received at WFUV have given him confidence that he’ll thrive in the industry.

“Whenever they show a shot of the control room during an ESPN radio broadcast, [I see that] we have the same equipment as they do. Literally. It’s like, ‘I could run that board right now. I could probably go produce that show if I wanted to,’ which is really cool to think about.”