skip to main content
Return to Fordham University
You are at:Home»Fordham Magazine»Features»Sports, News Broadcasting Legends and Young Journalists Honored at WFUV Dinner
Photos by Chris Taggart
A legendary NBA announcer and a distinguished broadcast news journalist were among the honorees on Nov. 1 at the annual WFUV On the Record dinner, held in person at Fordham’s Lincoln Center campus for the first time since 2019.

Fordham graduate Mike Breen, FCRH ’83, the lead voice for the NBA on ESPN and ABC, and the voice of the New York Knicks on MSG Networks, received the Vin Scully Award for Excellence in Sports Broadcasting. And Norah O’Donnell, anchor and managing editor of the CBS Evening News, was honored with the Charles Osgood Award for Excellence in Broadcast Journalism.

Fordham’s public media station, which is celebrating its 75th anniversary this fall, also paid special tribute to two people: the late Vin Scully, FCRH ’49, longtime voice of the Dodgers, who helped define the station in its early years; and former news director George Bodarky, FCRH ’93, who helped shape the careers of hundreds of young journalists during his 20-plus years at the station.

In the ‘Same Breath as Vin Scully’

Michael Kay, FCRH ’82, voice of the New York Yankees for the YES Network, presented Breen with the Scully Award. He recalled sitting in the Rose Hill campus center cafeteria in the 1980s, eating french fries and talking with a fellow Fordham undergraduate about their post-college aspirations. 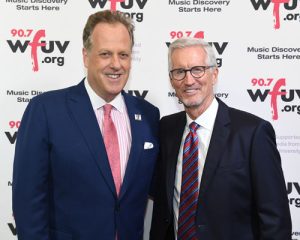 Kay saluted Breen for his remarkable career, which began at WFUV and includes calling 17 NBA Finals, the most of any broadcaster. He said Breen’s achievements and his character are why he “deserves to be mentioned in the same breath as Vin Scully,” the award’s namesake, who always “carried himself with elegance and grace and class.”

“You could go to anybody, in any part of this industry—there is not one person, not one person that has anything bad to say about Mike Breen. So he and Vin Scully go together,” said Kay, a 2018 recipient of the Scully Award. “He’s that sort of guy. He just treats people the way he’d want his children to be treated. And that’s special in this industry.”

Breen, who became only the second Fordham graduate to receive the award, said it was a high honor because Scully was “the gold standard.”

“When you’re an aspiring broadcaster, you dream about a lot of things, but you never imagine receiving an award named after Vin Scully,” he said.

Breen said that as an undergraduate at WFUV, he did a little bit of everything at the station and learned the value of hard work. In addition to covering sports, he served as a late-night and overnight music disc jockey, which he said gave him “one of the most memorable nights of my entire life.” Breen was on the air Monday night, Dec. 8, 1980, when news broke that John Lennon had been shot and killed in Manhattan.

“I was told by one of the seniors, ‘Take phone calls, take requests, and just play Beatles music all night,’” Breen said. “And the phones rang off the hook, and they were talking about what John Lennon meant to them. One gentleman told me how he was about to commit suicide, but John Lennon’s song stopped him. Another told me he had a drinking problem, and John Lennon helped them through that. And it was the first time in my life I realized what music meant to people.”

Breen said the experience, and his background in news, made him a more versatile broadcaster, which helped him throughout his career. He also said that he wouldn’t be receiving the award without the support of so many people, including Kay, with whom he has had “43 years of the best friendship a man could have”; his MSG broadcasting partner, Knicks legend Walt “Clyde” Frazier, who attended the dinner; and his wife, Rosanne.

“When you’re an announcer as long as I’ve been, you’re fortunate to have so many great partners,” he said. “I always believed announcers should never publicly say who their favorite partner is, but I’m going to break that rule tonight. And Clyde, unfortunately, you’re number two. You see, the best part about tonight is I get to share it with my favorite partner: my wife, Rosanne.”

Breen said those relationships and others have helped him and his family get through a particularly hard time recently after his house was destroyed in a fire. The Vin Scully award is the latest for Breen, who also has been inducted into the Naismith Memorial Basketball Hall of Fame as a recipient of the Curt Gowdy Media Award. 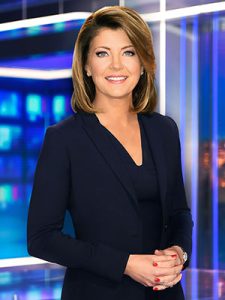 CBS News senior national correspondent Anthony Mason, who served as emcee for the evening, described his colleague Norah O’Donnell as a “fierce journalist” when presenting her with the Charles Osgood Award for Excellence in Broadcast Journalism. The award is named in honor of the 1954 Fordham graduate and WFUV alumnus who for many decades was the host of CBS Sunday Morning.

“We, her colleagues who sit next to her, have come to recognize a certain look Norah gets in her eyes when a senator or some such official is dodging or ducking or weaving or whatever,” he said. “And this steely veneer comes across Norah’s face. That’s when the question comes out that hits right between the eyes.”

O’Donnell wasn’t able to attend the dinner, but she sent video remarks that were played at the event. “I am so humbled and honored to receive this year’s Charles Osgood Award,” she said, “and thank you to Fordham University, where my mom went, and WFUV for your commitment to journalism,” which she said is more than “just a calling.”

“At its best, it has the power to make real change in the world that we live in, to give voice to those who feel like they have been silenced,” she said. “It is a privilege to do what we do.”

Mason said he was honored to participate in the event.

“I am what they said in radio, a ‘first-time, longtime’—I’m a first-time host [of On the Record] and I’m a longtime FUV listener and fan,” he said. “I became a fan somewhere around 25 years ago, when I moved out to the suburbs so we could raise our kids, and literally my car and my 45-minute commute and WFUV were my sanctuary from my crazy job.”

Honoring the ‘Patron Saint of WFUV Sports’ and an Influential Mentor

This year’s On the Record also featured two special tributes to broadcasters who helped shape the station and carry on its legacy—Scully and George Bodarky.

Scully, who died in August at the age of 94, was remembered through a video tribute produced by the WFUV sports department.

“Vin Scully is our patron saint. We revere Vin Scully. The ground he walks on is just golden,” Kay said at the dinner. “And we miss him … but his memory lives on, and one of the great things about Vin Scully is that his talent, which is exceptional, probably is only surpassed by the person that he was.”

Veteran sportscaster Bob Costas, who received the Vin Scully Award in 2013, took part in a panel discussion at the dinner. He said that one of the best things about being honored by WFUV was finding out about it from Scully himself.

“Everyone who won, they found out from Vin Scully—no one at Fordham told the winner until Vin had called them, and you heard that unmistakable voice, and he concluded his very gracious and warm comments always, ‘So Bob, welcome to the club,’” Costas said. “And joining any club of which Vin Scully is the charter member is a very good thing.”

Bodarky, the community partnerships and training editor at WNYC, was honored for his more than 20 years of service to WFUV, during which time he helped shape the careers of hundreds of young journalists, including NPR White House correspondent Scott Detrow, FCRH ’07, who presented him with the award.

“The thing about George is that dozens, maybe hundreds of people could be giving these remarks right now, telling you how George changed their life, how George taught them about broadcasting, how George opened the door to what became their career and their vocation,” he said.

Detrow said one lesson from Bodarky that has always stuck with him is that it is a privilege to tell people’s stories.

“He was talking to a student reporter one day, and he said, ‘What kind of interviews do you want to do?’ And the … student said, ‘I want to interview important people, I want to interview famous people,’” Detrow said. “And George said, ‘Those are actually the most boring interviews to do. They don’t want to tell you that much. What you want to do is interview people who have compelling stories—bring their stories to life, tell people about them.’ And I never forgot that.”

Bodarky said the honor wasn’t just for him but for all the journalists who came through the station. He asked those who had worked with him during their time at WFUV to stand up and be recognized.

“You are my success,” he told them. “You are the reason that I’m standing here tonight.”

Bodarky credited his mentors, including WFUV station manager Chuck Singleton, for helping him get his start in journalism as a Fordham undergraduate after he thought he wanted to pursue a law degree.

“This honor is also shared with my mom,” he said, “a single mother who raised two boys on her own, who always taught me to fly high and believe in myself, who I think without knowing it, taught me the importance of working hard, caring for others, and picking yourself up and dusting yourself off when times get tough.”

Bodarky said he’s grateful for the role he’s been able to play in so many journalists’ careers.

“When someone tells me that I played a role in their journalistic achievements, that they hear me in their head, guiding them when they’re on the air, writing a script, or doing an interview—that makes me feel present when I’m not present and that gives me the feeling of success,” he said.

Singleton said that Delk not only produced award-winning feature stories for Cityscape, the station’s weekly public affairs show, but also “effortlessly managed her peers as editor.” Wolz was recognized for helping to turn all of the station’s sports “shows into digital, streamed programming, most notably New York’s longest-running sports call-in show, One on One.”

Breen said that Wolz and Delk are examples of students who are not just carrying on but enhancing WFUV’s legacy.

“Every Fordham student who decides to join this amazing radio station feels a responsibility to uphold the standards that all the previous students and student broadcasters have set—I felt it, I know Michael felt it,” Breen said, referring to Kay. “And I’ll say this to you two, and your fellow current students and broadcasters who are here tonight, you’ve not only upheld the standards, you’ve raised them. And I say bravo.”

Singleton said that this year’s dinner raised more than $137,000, bringing the total raised since WFUV launched the On the Record program to more than $1.1 million. That funding supports the station’s student training program, which this year includes more than 130 students.