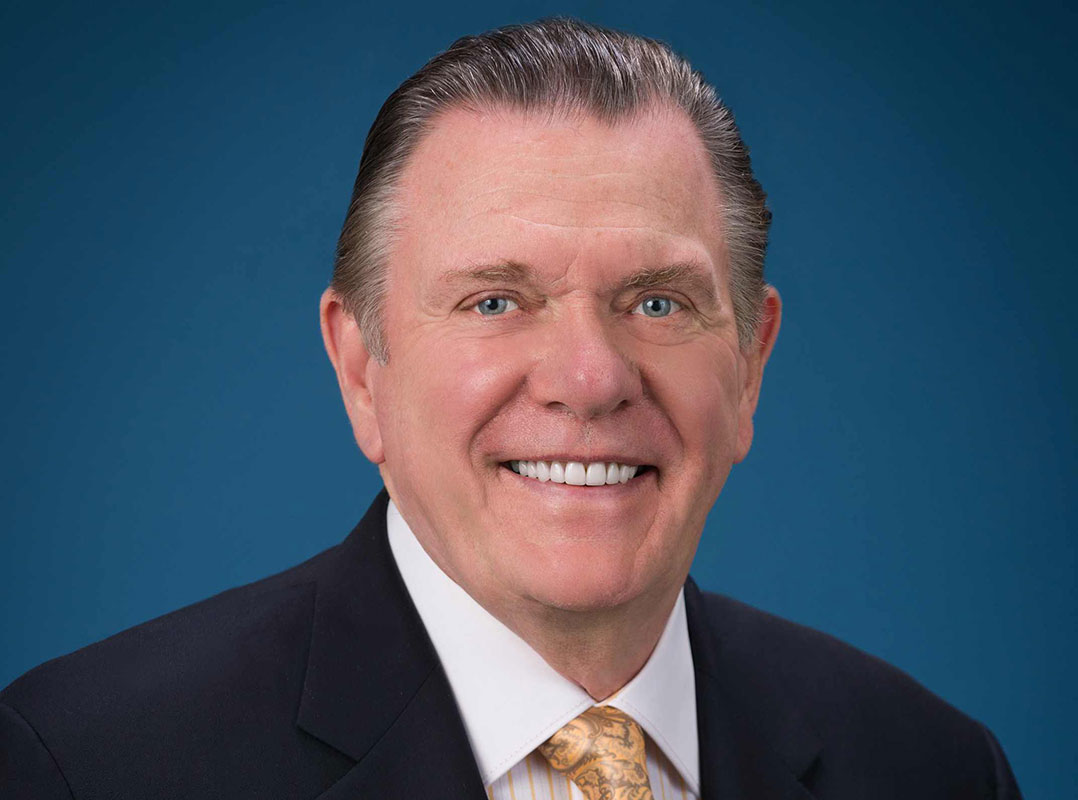 In The Gamble, his 2009 book on the Iraq War, Pulitzer Prize-winning journalist Thomas Ricks described Jack Keane, a retired four-star general, as “crackerjack smart and extremely articulate, often in a blunt way. Most importantly … he is an independent and clear thinker.”

Keane began his military career at Fordham as a cadet in the University’s ROTC program. He graduated in 1966 with a bachelor’s degree in accounting and went on to serve as a platoon leader and company commander during the Vietnam War, where he was decorated for valor. A career paratrooper, he rose to command the 101st Airborne Division and the 18th Airborne Corps before he was named vice chief of staff of the Army in 1999.

Since retiring from the military in 2003, Keane has been an influential adviser, often testifying before Congress on matters of foreign policy and national security. In late 2006 and in 2007, he was a key architect of the surge strategy that changed the way the U.S. fought the war in Iraq. He is a trustee fellow at Fordham; a member of the board of directors of General Dynamics, an aerospace and defense company; and chairman of the board of the Institute for the Study of War, a Washington, D.C.-based think tank that monitors global conflicts. He’s also a senior national security analyst on Fox News.

Keane spoke with FORDHAM magazine about service, leadership, and whether or not his loyalties will be divided on Sept. 1, when Fordham football opens its 2017 season with a game against Army at West Point.

What inspired you to join the Army?
I joined the ROTC program essentially because the country was at war and we knew that we would likely be joining it. In the mind of myself and my friends, it made sense to do that as officers, although none of us had ever had a family member who was an officer. Then, as part of the ROTC program, I joined the Pershing Rifles [national military society] because they seemed more confident and accomplished than the other participants in ROTC.

We took basic marksmanship training, and we would go to Camp Smith and practice patrolling techniques and other tactics under the supervision of active-duty officers. That gave me some exposure to what I thought the Army would be like. By the time I graduated, I came to recognize that I had an aptitude for it. And I liked the idea of serving the country.

I saw an interview you did a few years ago with Bill Kristol. You told him about a conversation you had with a Jesuit around the time you were graduating from Fordham. Who was that Jesuit and what did you two talk about?
I think it was Father [Thomas] Doyle, [then an assistant professor of philosophy], but I’m not sure. He asked me what I was planning to do, and I said, “I’m going to go in the Army.” He said, “No, I mean, after the Army.” I said, “Well, I’m thinking about maybe making a career out of it if I’m capable and if I like it to the degree that I think I will.” He said, “Why would you do that? You have so much more to offer.”

I said, “Well, Father, have you ever been associated with the Army? Were you a chaplain?” He said no. I said, “Well, I’ve spent a lot of time around it and people who serve in it, and I don’t think it’s necessarily what you think it is. I think there’s an incredible amount of opportunity for growth and development as a human being. I think I’ll have the freedom of thought and the opportunity to be very challenged, and I think that will lead to a growth experience for me.”

That turned out to be the case.

The way you describe the Army, in terms of opportunities for growth within a strict organizational structure, could also be applied to the Jesuits, I would think. You went to Catholic schools before Fordham, but was Fordham your first encounter with the Jesuits?
I told my new Army friends that after 16 years of Catholic education, the transition to the Army was very smooth! I think of Fordham and the Jesuits as a transformational experience. The rigor of the Jesuit methodology was evident in all classes. What they were least interested in is regurgitation of information. What they’re most interested in is critical thinking based on analysis and some rigorous method of interpretation using reasoning.

That was challenging because it was completely different than my Catholic high school. I thought college was just going to be high school on steroids. At Fordham, it was quite something else. The whole learning process was about your own growth and development as a human being—not just intellectually but also morally and emotionally. I don’t think I would have been as successful as a military officer if my path didn’t go through Fordham University.

Would you talk about your approach to leadership and how it has evolved since your days as a platoon leader? Are there certain qualities that you feel all effective leaders share?
First of all, there are very few natural-born gifted leaders. Most leaders learn from experience. If you’re in the United States military and you start out as a second lieutenant platoon leader with 40 people, your life from that moment on is a leadership laboratory. You have plenty of opportunity to learn and also to observe leaders who are very effective.

When you really get down to it, what you’re doing is motivating and inspiring others to reach their full potential and to do that collectively as an organization. Whether it’s a small team or a large team, the opportunity to learn and to grow is really quite extraordinary.

Some of that for me was in combat, which is such an extraordinary human experience. Everything that you are as a person—your character, your intellect, your moral and physical courage—is brought to bear under significant stress. People’s lives are dependent on you. You’re not only there to protect the civilian population and protect your own soldiers; you’ve been given the authority to take lives. The moral underpinning for something like that is really quite significant. I think having had 16 years of Catholic education and participating at Fordham, where I took four years of theology and four years of philosophy, which were my favorite courses, by the way, really provided me with the wherewithal not only to cope with combat but to perform to a high standard. 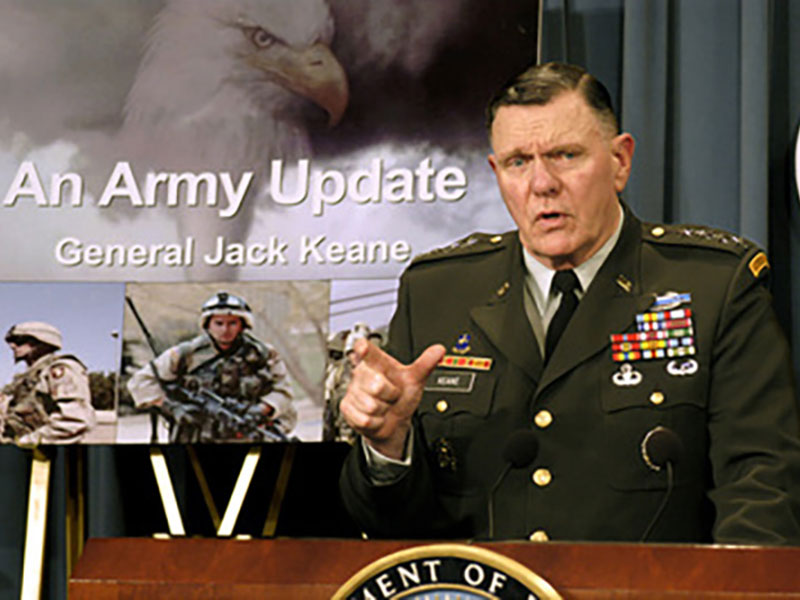 Gen. Jack Keane, then acting chief of staff of the U.S. Army, briefs Pentagon reporters on how the Army is supporting Operation Iraqi Freedom, July 23, 2003. (Department of Defense)

With regard to leadership, anybody can make a list of attributes leaders have to have—integrity, judgment, moral underpinning, et cetera. But there is one attribute that’s always stood out for me, and that’s perseverance. You have to persevere to accomplish the mission. Whether that’s in a stressful situation like combat or in other environments, perseverance really can be very defining because there are constant impediments and obstacles. You see people, not just in the military but in all walks of life, who because of those obstacles and impediments accept something less. They could continue to drive on. Most of the time, it’s more about mental toughness than it is about physical toughness.

Two years ago, Fordham ROTC established the General Jack Keane Outstanding Leader Award, to be given each year to a graduating cadet. What does that award mean to you, and what advice do you give newly commissioned officers?
I was honored to give out the first General Jack Keane Award [at the University Church in 2015]. And I was quite humbled by it, to be frank, when I got my head around the fact that they will always give this award to somebody who is outstanding as a cadet and likely more outstanding than I was.

I’ve always told my officers and my generals that we’re in leadership positions because we know how to lead effective organizations; we get results. But our legacy is not how well we run these organizations, because there’s another guy or gal standing behind us who could run it even better. The real legacy is the growth and development of the people in these organizations. If you focus on their growth and development, and if you have programs that support that, the organization will take care of itself. The organization will actually blossom because the people in it are so committed to it and have a very high degree of satisfaction. That is your legacy. 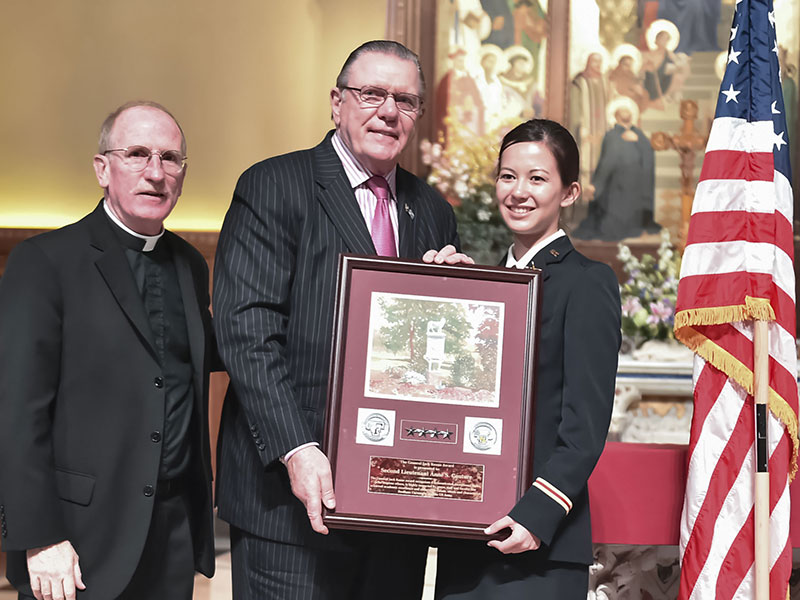 What’s the best piece of advice you’ve ever received?
It came from a sergeant major. I was a major at the time. I was very intense, working very hard, and I was a little frustrated with my boss, my battalion commander, who wasn’t paying attention to all the things I thought he should be paying attention to. The sergeant major closed my office door and said to me, “Major, I know you’ve got some things that are bothering you. I want you to know just one thing: You’re responsible for your own morale.” He looked at me and said, “You got it, sir?” I said, “I got it, sergeant major, thank you very much.”

I never forgot that. It was sound advice.

Fordham football is playing Army at West Point on September first. Who will you be rooting for?
I’m going to miss the game, unfortunately, but good Lord, I want to beat those guys. When I go to West Point for the game, I usually talk to the corps of cadets about the U.S. global security challenges: the Middle East, Russia, the problems with Al Qaeda and ISIS, et cetera. After I spoke a couple of years ago, the first question I got was from a cadet. He said, “General, so we understand you went to Fordham University. You spent almost 40 years in the Army, and you spent only four years at Fordham, so I’m assuming you’re rooting for Army.”

So yes, I want both teams to play well, certainly, but I definitely want us to win.

Related Story: “My 9/11: A Personal Reflection by General Jack Keane, Former Vice Chief of Staff of the U.S. Army”