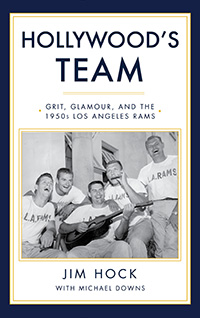 When Jim Hock, FCRH ’91, lost his father, John, back in 2000, he and his brothers laughed and cried at a memorial service as they listened in rapt attention to stories of the Los Angeles Rams teams that John played on as an offensive lineman back in the 1950s. Before the service had even ended, Jim’s brother began urging him to collect the stories for a book, which became Hollywood’s Team: Grit, Glamour, and the 1950s Los Angeles Rams (Rare Bird Books), published on December 27.

Hock worked on the book while starting a family, founding a public-relations firm, and, from 2013 until last week, working for the Department of Commerce, first as a senior adviser and later as the chief of staff to former Commerce Secretary Penny Pritzker.

John Hock moved his family to New Jersey when Jim was a young boy, but during Jim’s senior year at Fordham, he was inspired by a Jesuit Volunteer Corps open house to head west after graduation and begin working in a school for at-risk youth in East Los Angeles. During his years on the West Coast, Hock also worked as a legislative assistant for the City of Los Angeles and interned with his father’s old team, the Rams (which, incidentally, chose its name in honor of the great Fordham Rams teams of the 1930s).

With all that you’ve had going on, how did you find the time to work on this book?
I basically worked on the book from about 2002 to 2013. I was lamenting that I didn’t have a lot of time, but I had a friend in the book business who said, “I have a great collaborator; let me introduce you.” I met Michael [Downs, the book’s co-author], and we just completely hit it off. I did most of the interviews, but he did some interviews as well, and we would share notes. It was like a 50-50 proposition, in terms of the writing. We could bounce things off each other. Working collaboratively is more fun. But I wasn’t sure what I was going to do with the book. And so it kind of sat on the shelf a bit. But then that same friend in the publishing business said, “Look, the Rams are moving back to Los Angeles [from St. Louis, where they moved in 1995]; you need to publish this. This is a great story.”

How did you balance your dad’s story with the story of the team and the times?
There’s the story of my dad throughout this book; he’s the protagonist. But it’s a juxtaposition of the glitz of Hollywood with kind of the real people that make up any city and any community, through the hard work and the quiet work. And so that’s what I was trying to show—a way to honor him and his teammates, but also the people that we all know do the hard work behind the scenes to make things go. That was the genesis of it, and that was the focus of it. And so we tell lots of stories about players and times, but we were really trying to highlight the people. 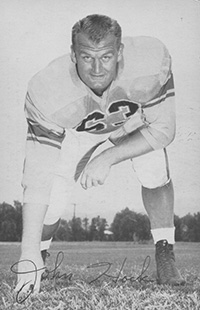 What was the best part of growing up with a father who played NFL football?
I’m the youngest of seven, and the book is about my dad, but it’s about my mom, too. We heard stories growing up all the time about what it was like to play football in the 1950s. It was obviously a much simpler time. My mother was a third-grade teacher at the same time my dad was playing professional football, and they basically made a comparable salary, which today is just unthinkable. He was a regular guy who loved what he was doing, and loved the game. He was a very quiet guy, a humble guy as well.

The Rams were the first team to integrate, so I heard stories about what it was like for my dad to have African-American friends in the ’50s and go to places, including New York, and not be welcome in bars. It was just story after story like that, from his perspective of what it was like—obviously, he was outraged at that kind of stuff. Hearing those stories was fascinating. We were obviously exposed to famous people, but I was never really interested in that. My dad always said, “Don’t ask for autographs, they’re just like you and me.” 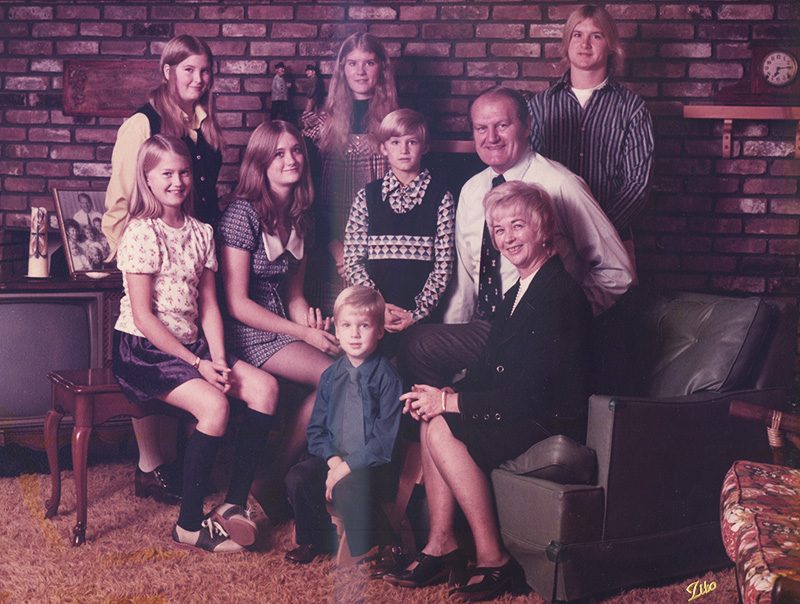 The San Diego Chargers just announced they’re moving back to Los Angeles. There’s been talk for a while of pro football’s place in Los Angeles. Do you think LA can handle two teams?
I do. There’s a natural following for the Rams. There’s been Facebook pages and other things even before they moved, that I’ve been following, maybe because I’m a dork. But hundreds of thousands of people were kind of wishing them back, and the Rams, when they announced their season tickets, sold out within a matter of hours. So there is a market there. It’s a big metropolitan area. It’s much broader geographically than New York, more spread out. You have 20-plus million people in the Southland, they call it, that they can draw from. It’ll be interesting to see. The Chargers don’t have a natural fan base there, because they only played there one year, in 1960, but they’ll find a following.

What will you miss most about working in the Obama administration?
I’ll miss the people the most. We had a tremendous team dedicated to a mission. Our mission at the department was helping businesses with additional tools they needed to succeed. At the end of the day, our goal was to help businesses so they could create jobs and opportunity, and we have quite a trajectory over the last eight years of going from the worst recession since the Great Depression to now 15 million-plus jobs created. You know, there’s more work to do to help people around the country that are still hurting, but that was the key.

What’s next for you?
I’m going to do some private consulting. My first priority is taking time off. So I’m taking a few weeks off to be with my kids and wife and family. My job was two phones constantly ringing 24 hours a day, and it was a tremendous honor, but that time is over.