skip to main content
Return to Fordham University
You are at:Home»Fordham Magazine»Seven Questions with Amirah Vann, Ernestine on Underground

When she first heard about Underground, WGN’s new series about the Underground Railroad, Amirah Vann, FCLC ’02, hesitated. After doing a lot of theater work in New York City, she was interested in moving to TV and film. But she wasn’t sure she wanted to be part of a project depicting slaves as passive, one-dimensional characters. Then she read the script. Now, having fully embraced the role of Ernestine, Vann hopes the show can help give viewers a more nuanced understanding of the experience of slavery and add to the current dialogue on the black experience in America.

What attracted you to Underground?
When I first got the audition, I let it sit for a minute. Like many people, I made an assumption about the project based on what we’ve seen on the topic. But as soon as I read the script, I realized it wasn’t showing the slaves as downtrodden; it was showing them as heroes, as strong, as leaders. It’s all about family, commitment to education, to bettering a community—it’s about all the things I want to pass down to my nephews and nieces. It’s about this nation’s first integrated civil rights movement.

Tell me about Ernestine, the character you play on the show.
I play the head house enslaved mother of three, a grand and fiercely devoted mama. I love her strength. I get to explore questions of faith, of sexuality, of motherhood, of womanhood. She’s complicated, and she has to make some difficult decisions. But that’s the beauty of this piece. No one is perfect, and I think that’s reality. We’re always close to being able to be our best selves and also always very close to being our worst selves. We all have to make that choice on a daily basis. 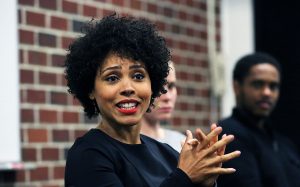 How did you prepare for this role?
Fordham taught me that acting was about making bold, informed, and fully invested choices. I got excellent training in theater, but I was also able to enrich myself in other disciplines. So my way in has always been research. I read a lot. Right now I’m reading Incidents in the Life of a Slave Girl.

How is being on a TV show different from working in theater?
It’s a different rehearsal process. I only get the scripts a few weeks in advance, so I have to trust our director and writers, who are all fabulous, because they know the arc of the character. In theater you get two hours to take that journey, one moment in their lives. This is a longer journey, and it’s more like real life that way.

Do you think it’s significant that this show is happening now, during the Black Lives Matter movement?
I definitely think it’s important now. I’m excited about any project that makes people ask more questions to find out the truth about history and about where we came from. I feel like when we know that, we have a better understanding of ourselves and of these movements. So if this opens up a part of people’s compassion, of not wanting people to be trapped and the desperate need for us to make sure that all people are free, then that’s great. Going to the screening of Underground at the White House in February made me realize even more that this show is about putting yourself in a position of authority, and about how important it is that people in power look like the world—different races, genders, and more—so they can really represent those different voices and experiences.

You’re half Puerto Rican. Do you think there are similar issues in that community?
Yes. There are so many Afro Latinos who love and appreciate the show, but what we see in the mass Latino media is European, European, European. We haven’t talked enough about where this colorism comes from, about that history, how color was just used to divide us and create self-loathing. But there shouldn’t be any doubt when you look in the mirror that you are a beautiful representation of your race and culture.

Where are you going next?
I hope this show continues and that I can be a part of it. And I’m definitely ready to do something with music. On one episode, I sing something inspired by the Gullah Geechee tradition that they asked me to create, and that sound is really profound to me. If I can sing and tell a story, I’m in heaven.