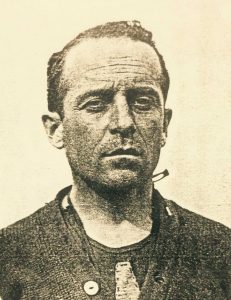 It’s 8 a.m. on a frigid Saturday morning in early March, and most of Fordham’s Rose Hill campus is just sputtering to life. But at the Lombardi Memorial Center, members of the Fordham rowing team, some 45 men and women, are already seated at rowing machines and well into morning interval training.

The day’s workout is 90 minutes of distance and sprint conditioning, offset by short recoveries, all of it meant to simulate rowing’s home-stretch intensity of “legs burning and lungs bursting,” says Ted Bonanno, head coach of the women’s varsity and men’s club teams.

“We have an expression,” says Fordham senior Patrick Cahill, co-captain of the men’s team. “You earn your medals in the winter and pick them up in the spring. … Without the gym work, there would be no success.”

That philosophy takes on particular relevance this year, as Fordham rowing celebrates its centennial. It all started with John J. F. “Jack” Mulcahy, an 1894 Fordham graduate and one of the pioneers of American rowing. The New York native went on to become Fordham’s first Olympic champion. At the 1904 Olympic Games in St. Louis, Mulcahy and Michael Varley won the gold medal in double sculls and the silver medal in coxless pairs.

With his rugged good looks and chiseled features—“a man you wouldn’t want to tangle with,” jokes former Fordham rower James Sciales, FCRH ’87—Mulcahy even modeled for some of the sculptures that adorned the Olympic venues.

In addition to founding and coaching the Fordham team in 1915, Mulcahy served for several years as president of the Atalanta Boat Club and was a New York City alderman. He’s revered among Fordham rowers past and present, who share his passion for rowing’s relentless focus on the team.

“This isn’t a sport where you stand out and star,” says Bonanno, who rowed on the U.S. national team in the 1970s, coached at three Olympics, and is in his 26th year at Fordham. “No matter how much you do, you’re only as good as your whole boat.”

Fordham senior Nicole Arrato, captain of the women’s team, prefers it that way, saying one of rowing’s greatest challenges is being on the water and having to pull with the same momentum as your seven teammates. “You have to learn teamwork and communication,” she says. “And you need the mental and physical drive to reach your best.”

That today’s team continues to row on the Harlem River, the same waters used by Mulcahy, is not lost on past or current rowers. After all, it was the success and celebrity of Fordham’s first Olympic champion that helped establish New York City as a center of American rowing.

“Here was an Irishman who worked his way up in what was then considered a gentleman’s sport and became the best in the world,” says John Fischer Jr., FCRH ’72, a former men’s team co-captain. “And to think he was a Fordham man. Not many schools can point to that kind of a heritage.”

On November 14, the Fordham Rowing Association will celebrate the program’s resilient legacy with a gala dinner at the Water Club in Manhattan. Learn more and register.