skip to main content
Return to Fordham University
You are at:Home»Fordham Magazine»Alumni News»ROTC Graduate Helps Blaze Trail for Women in Combat Roles
Esther Kim, GABELLI ’16, one of the first women officers admitted to a combat role in the U.S. military, is shown at her May 2016 commissioning at the University Church. (Photo by Bruce Gilbert)
Esther Kim knew from a young age that she wanted to join the Army, but the military occupation that interested her most—operating tanks and other tracked vehicles—was closed to women.

So when that changed during her fourth year of ROTC at Fordham, she applied right away—and became one of the first female officers in the nation selected for close-combat roles that had always been the province of men.

At her commissioning in May 2016, she was feeling the weight of expectations. “I was really nervous,” said Kim, GABELLI ’16. “I was thinking, ‘I hope I did the right thing.”

More than a year later, 2nd Lt. Kim is with the U.S. Army’s 1st Cavalry Division at Fort Hood, Texas, commanding a platoon of 16 people—including two women—and four tanks. She leads them every morning in physical training, starting at 6:30, and oversees the other routines of Army life, like doing preventive maintenance on the tanks or firing on the rifle and pistol range.

She’s formed a rapport with the men under her command, and has found that her gender has little impact on how she’s received in the Army. When a superior officer in her unit asked if she was being treated differently compared with men, “I said ‘no,’ which is true,” she said.

But she remains keenly aware that she’s among the vanguard of women in combat roles, a fact that only makes her strive harder. “I feel like there’s always something you can do better, and if I don’t do that 100 percent, or 110 percent, then I might be messing it up for people coming after me,” she said.

The opening of combat roles to women began with a three-year study across the armed services, culminating in the Dec. 3, 2015, announcement by then-Defense Secretary Ash Carter that women would be allowed in all military occupations, without exception, as long as they qualify for them. 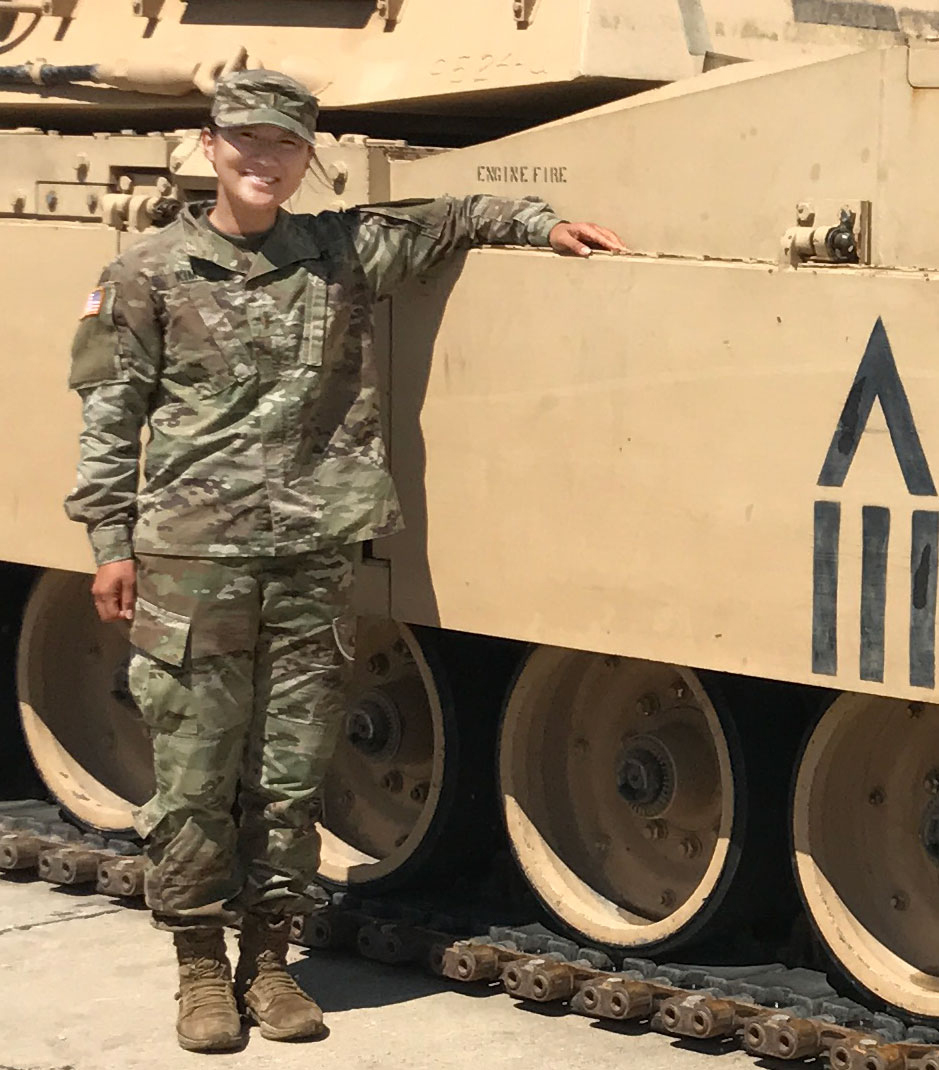 Esther Kim is shown at Fort Hood, Texas, where she is commander of a tank platoon. (Photo courtesy of Esther Kim)

“They’ll be able to serve as Army Rangers and Green Berets, Navy SEALs, Marine Corps infantry, Air Force parajumpers, and everything else that was previously open only to men,” he said in a statement.

Kim had grown up in northern New Jersey playing war games with her older brother and his friends, and her interest in joining the military was fueled by the Sept. 11 attacks, in which some of her friends’ family members perished.

She came to Fordham after a recruiter recommended ROTC over enlistment. “What shocked me most was waking up so early,” she said, recalling one 3:45 a.m. wake-up dictated by a first sergeant who had the cadets get up progressively earlier whenever anyone was late for their morning formation. But she quickly grew into the program, sometimes traveling far afield to seek out challenges and gain insight into the workings of the military.

In addition to her summer training at U.S. military bases, she did a cultural immersion and language proficiency program in South Korea that involved her in that country’s army for part of a summer, while also giving her a chance to catch up with extended family members there.

For another summer, she shadowed a lieutenant in air defense artillery at Fort Bragg, North Carolina. Then, in her senior year, she sought the high-level S3 position within the Fordham ROTC cadre, in which she oversaw all the battalion’s operations and training—everything from the unit’s physical workout plans to field training exercises to the ROTC military ball.

It was hard work—“like a full-time job,” she said. “But I really enjoyed ROTC. I enjoy taking charge and helping plan. After working super-hard on things, seeing everything executed and working out well in the end is a great feeling.”

Kim was a senior at the time of Secretary Carter’s announcement. She became one of 13 female lieutenants picked for infantry or armor out of 29 nationwide who applied. Another nine female lieutenants, from West Point, were also admitted to combat roles.

At her commissioning, she was awarded the General Jack Keane Outstanding Leader Award, named for the Fordham alumnus and former Army vice chief of staff. A speaker hailed her by name for “blazing this trail” for other women. And she took that seriously, wanting to make a good first impression for other women following the same path.

“I was working out every day, if not twice a day,” she said. “Fordham ROTC really helped me out. They gave me a lot of gear to help prepare.”

But during her first training stint, an armor officers’ leadership course at Fort Benning, Georgia, her fears “just kind of died down, the more I got to know my [male]peers,” since they had generally grown up with women as equals, she said.

The women officers tended to win acceptance in this type of initial training, said Ellen Haring, Ph.D., a retired Army colonel and senior fellow with the advocacy group Women in International Security. She interviewed Kim as part of an ongoing five-year study of the first cohort of female officers in infantry and armor. 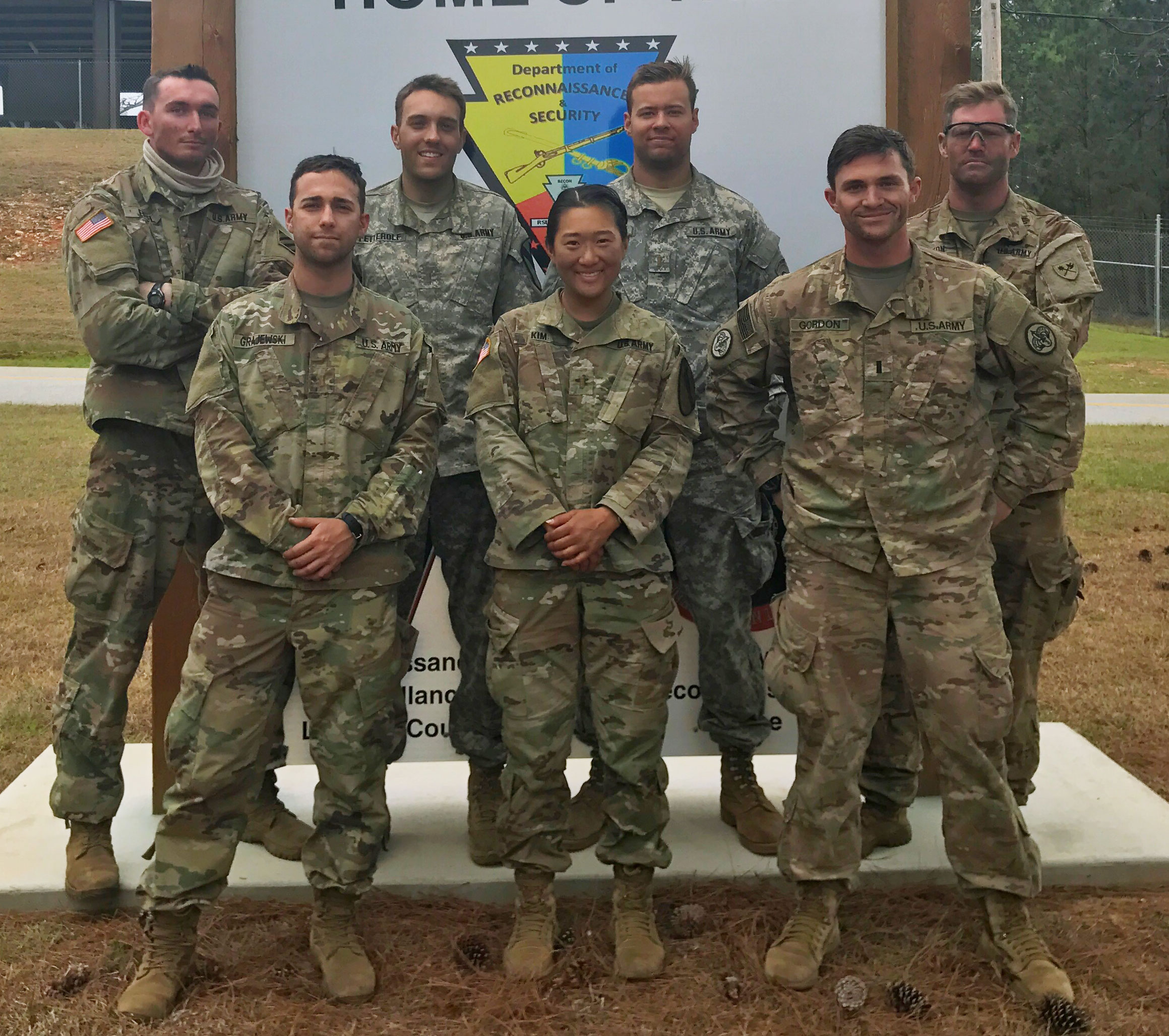 Esther Kim is shown with fellow squad members from the Army Reconnaissance Course, which she completed after being commissioned. (Photo courtesy of Esther Kim)

Instructors who initially thought “this is never going to work” were impressed by how motivated and determined the women officers were, she said.

“[The instructors were] able to see that there were women capable of doing these jobs,” Haring said. “Now they’ve completely changed their minds and have become, in many cases, strong advocates for them.”

Back at Fordham, Kim has set an inspiring example for other female cadets, said Lt. Col. Samuel Linn, an artillery officer and professor of military science with the Fordham ROTC program. “We definitely have women that are very interested in combat roles,” and Kim’s achievement makes that possibility more real for them, he said.

Before coming to Fordham, he saw women perform “extremely well” as fire support officers accompanying infantry companies. He said Army teams can benefit from the diversity of thought and experience that comes with the greater integration of women.

“I think anytime you’re trying to create a high-performing team like we are in the Army, if you’re only pulling from half the population, you’re probably leaving a lot on the table,” he said.

After finishing the leadership course for armor officers, Kim underwent a course for tank commanders and a reconnaissance course, where she was the only woman on the Commandant’s List (comprising the top 20 percent of the class).

After her arrival at Fort Hood in April, a superior officer told her “‘I don’t [care]if you’re female or male; I’m going to keep you in this position if you can do your job, and if not, I can fire you and put you somewhere else,’” she said.

The biggest part of the job is “getting to know your crew, and seeing how everyone operates,” she said. She and her crew have undergone a series of training exercises in the tanks, culminating in a qualifying exercise in which they earned 950 out of 1,000 possible points. “It was my first one, so I was pretty happy about it,” she said.

Kim hopes to eventually join Special Forces or serve in one of the support teams that accompanies Special Forces when it’s encountering foreign cultures during a military operation. In the meantime, she’s always aware of the trail that she’s helping to blaze.

“I feel like there’s a lot on my shoulders,” she said. “So I want to continue to do well.”