skip to main content
Return to Fordham University
You are at:Home»Fordham Magazine»Research at Work 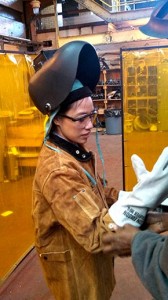 Amy Batallones, FCLC ’13, suits up in welding gear to do mechanical work at one of Con Edison’s steam-generating stations.

For Amy Batallones, securing a faculty mentor was one of the most important things she did as a Fordham undergraduate. “Seek out a mentor who is doing something that you want to do. They are really willing to help you,” she says. “Show a little interest and it goes a long way.”

Batallones’ interest in computers and technology led her to Frank Hsu, Ph.D., Clavius Distinguished Professor of Science at Fordham.

In her junior year, Batallones began working with Hsu in his Laboratory for Informatics and Data Mining, where she conducted research in cognitive science.

In Hsu’s lab, Batallones sought to understand how the human brain works when two different people assess the same situation. She and her fellow student-researchers went to Central Park to conduct a study. They randomly selected pairs of individuals, who were asked to stand 10 feet apart and 40 feet away from a 20-by-20-foot marked area. One of the student-researchers threw a 1.5-inch-square metal object into that marked area. Then the pair was asked, independently and simultaneously, to point out where that object had landed.

“Intuitively you think you saw it land and know where it is,” Batallones says, “[but it]ended up that the two participants thought it landed in two different areas.” The researchers analyzed the results using a methodology called Combinatorial Fusion Analysis. “It’s a framework for combining two different systems for one optimal system. Similar to how you combine two numbers to get one in average,” says Batallones, who majored in computer science.

“It can also be used in other domains, like drug discovery, Internet search, and stock portfolio analysis.”

Seek out a mentor who is doing something that you want to do. Show a little interest and it goes a long way.

“It was incredible, and it made me proud,” she says of the win.

She also appreciates the support for her research, which was backed, in part, by funding from Edward Stroz, GSB ’79, vice chair of the Fordham Board of Trustees and founder and co-president of the global consulting firm Stroz Friedberg, LLC, and by a Clare Boothe Luce Research Scholarship, a grant to encourage and support women to explore careers in the sciences.

“The Clare Boothe Luce grant, that’s what really got me to start this, as I saw there were opportunities that I wasn’t seizing. So now [I get] to really represent young women in science and math.”

Batallones, a first-generation Filipino American, grew up in Springfield, N.J., as a computer enthusiast. The passion waned when she took a computer programming class in high school, but she gave the subject another chance by taking a second class. “I fell in love with it and started learning about how dynamic the field is and all the opportunities available to me,” she says.

At Fordham, she interned with pharmaceutical company Sanofi-Aventis and with energy company Con Edison. She was also a Lego robotics instructor at P.S. 261 in Brooklyn, where she taught second graders how to assemble robots. “They gave up their recess for the class,” Batallones says. “It’s important to facilitate that knowledge at a young age.”

She returns to Fordham often to speak to students and visit with Hsu. It’s a short walk to the University’s Lincoln Center campus from where Batallones works, at Con Edison’s colossal 59th Street steam-generating station, where she is an associate in the company’s GOLD Program, an 18-month program that trains recent business, computer science, and engineering graduates in the various departments of the utility company.

“[The program] has been really great for me. … I’m getting a crash course in managing and speaking with different types of people and under different types of circumstances,” she says. Now in the program’s second rotation, Batallones is a first-line supervisor for the company’s construction services unit. She provides guidance to her crew and performs mechanical support for projects within the city-block-long 59th Street station, which helps heat, cool, and power many Manhattan buildings.

Batallones is quick to give credit to those who helped shape her Fordham education.

“If it weren’t for my relationship with Dr. Hsu and my other mentors,” she says. “I wouldn’t have what I have.”