skip to main content
Return to Fordham University
You are at:Home»Fordham Magazine»Reimagining Penn Station: A Plan to Restore America’s Busiest Transit Hub to Its Former Glory
Above: A new version of Penn Station would bring back the old station’s majestic Seventh Avenue portico (Rendering by Jeff Stikeman for Rebuild Penn Station)
It’s been called the most miserable transit hub in the Western Hemisphere—“decrepit,” “soul-crushing,” and many other pungent epithets.

It’s certainly the busiest. Hundreds of thousands of people hustle through Penn Station’s labyrinthine, low-ceilinged corridors every day. Amtrak owns the terminal but shares space and operations with New Jersey Transit, Long Island Rail Road, and the New York City subway. Problems have compounded in a system stretched beyond capacity. Minor delays become major headaches, and overcrowding erodes safety and security. The whole enterprise—and much of the economic vitality of the region—relies on crumbling, outdated infrastructure: narrow platforms, failing ties and switches, and tunnels that may be one major storm surge away from becoming permanently inoperable.

For Samuel Turvey, FCRH ’79, LAW ’83, the way forward for Penn Station is through its storied past, a time when the station wasn’t a sunless maze but a shining symbol of New York grandeur.

“If we want to keep pace with London, Tokyo, Paris, and Hong Kong, we need to stop using patently dangerous tunnels from 1910 and funneling 650,000 people daily under a basketball arena,” he says. “A train station can and should be located over what presently passes for Penn Station.”

Turvey leads the steering committee for Rebuild Penn Station, a project of the National Civic Art Society conceived by architect and historian Richard W. Cameron. They have been calling for a new and improved version of the original station, as well as a comprehensive transit plan to ease regional congestion.

The original station, designed by architect Charles Follen McKim, was a beaux-arts masterpiece inspired in part by Berlin’s Brandenburg Gate and the ancient Roman Baths of Caracalla. Opened in 1910, it featured a stately colonnade on Seventh Avenue, with an arching glass ceiling above the train platforms and a massive, sunlit general waiting room where, as historian Jill Jonnes wrote in Conquering Gotham: Building Penn Station and Its Tunnels, the “play of light and shadow in [the] high curved ceilings and pillared walls was evocative and deeply poetic.” 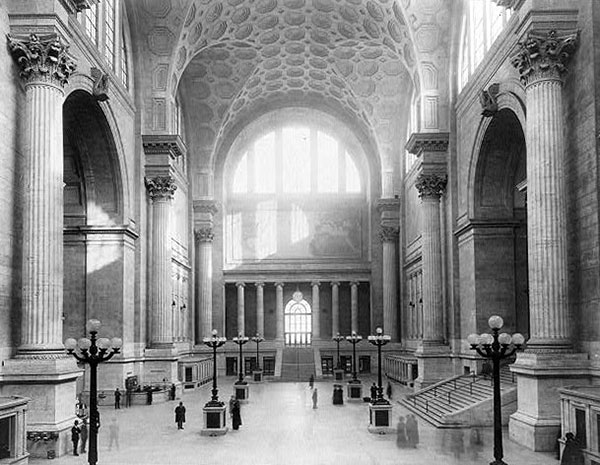 Built by the Pennsylvania Railroad, the station was designed as a public space that would elevate the city’s reputation while honoring the engineering feat that made the station necessary—the construction of subaqueous railway tunnels linking New Jersey to Manhattan and Manhattan to Long Island. McKim said he designed the station as a “monumental gateway … to one of the great Metropolitan cities of the world.”

By the early 1960s, however, the Pennsylvania Railroad had fallen on hard times with the advent of the interstate highway system. “Ultimately, their duty was to shareholders, not to posterity,” Turvey says of the railroad’s decision to skimp on upkeep and sell the air rights to developers who eventually demolished the original building and built the Penn Plaza offices, a theater, and Madison Square Garden atop the station’s platforms and tracks.

In an October 1963 editorial, The New York Times called the demolition a “monumental act of vandalism.” (The public outcry spurred the creation of the New York City Landmarks Preservation Commission, which played a key role in saving Grand Central Terminal from destruction.) Years later, architectural historian Vincent Scully lamented what New Yorkers lost at Penn Station: “Once, we entered the city like gods,” he said. “Now we scurry in like rats, which is probably what we deserve.”

Turvey believes New Yorkers deserve better, and so does Gov. Andrew Cuomo, FCRH ’79. Last January, during his State of the State address, he reaffirmed his commitment to fixing the station, and left open the possibility of using eminent domain to do it. 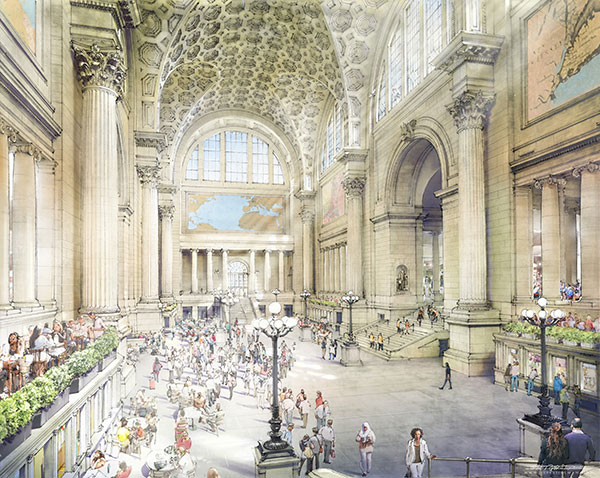 Some changes are already underway. The James A. Farley Building, the former post office building across Eighth Avenue from Madison Square Garden, is being transformed into a train hall for Amtrak and Long Island Railroad passengers (a project initially led by current MTA President Patrick Foye, FCRH ’78, LAW ’81, who was then working for Governor Eliot Spitzer). Funded by developers, New York, New Jersey, and the federal government, the renovations are scheduled to be done by late 2020.

For Turvey, that’s a good but partial step, one that will alleviate only about 20 percent of the pedestrian traffic at Penn Station and do little to resolve the bigger issues, congestion chief among them.

Rebuild Penn Station has supported a plan by Jim Venturi of ReThinkNYC to make Penn a through station instead of the last stop for New Jersey Transit and Long Island Railroad trains. Trains would no longer be “going back empty,” Turvey says. “Think of the subway: If the subway came down from the Bronx, stopped at 42nd Street, and went back empty, how much waste is that?”

The plan calls for adding or expanding transit hubs in New Jersey, Queens, and the Bronx, while eliminating some platforms in Penn Station and widening others to accommodate more escalators, Turvey says. The plan takes into account the $30 billion Gateway Tunnel Project, which would add a second tunnel under the Hudson. 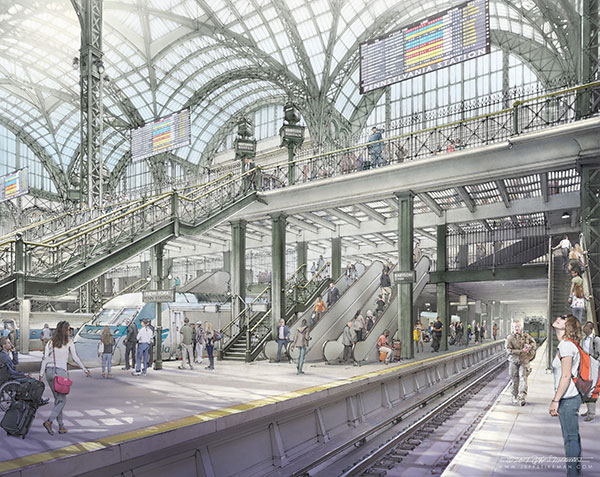 For Turvey and a growing number of civic groups, however, relocating Madison Square Garden is key to renovating Penn Station. They recommend moving it to the Morgan Post Office and Annex, a five-minute walk west of its current location, by the time the Garden’s lease expires in 2023.

“Madison Square Garden really needs to move if you’re ever to get that location right,” he says. “It’s a historical accident that a basketball arena is on top of a train station. It’s illogical.”

Turvey knows the old Penn Station from books, photos, and Hollywood films. On a recent stroll through the current station, he pointed out some glimpses of its past: a cast-iron partition here, a brass and iron railing there, some glass-block tiles that were designed to allow natural light to reach lower levels but now bear fixtures for fluorescent bulbs. “Dreams die hard for me,” he admits. But he denies that he’s guided solely by nostalgia, and insists that classical tastes and innovation can go together, citing Grand Central Terminal and Washington, D.C.’s Union Station as examples.

“There’s a strain in the architecture community that doesn’t like the idea of rebuilding old buildings,” he says. But he points to recent examples of architectural reconstruction, like Moscow’s 19th-century Cathedral of Christ the Savior, which was torn down on Joseph Stalin’s orders in 1931 and rebuilt in the 1990s. And he argues that Penn Station could be rebuilt on the existing foundations “using modern, more cost-effective construction techniques with appropriate upgrades for expanding train and pedestrian traffic.”

The estimated cost, he says, would be between $3 billion and $3.5 billion.

Turvey grew up on the north shore of Staten Island, where his grandfather worked briefly as a stevedore for the B&O Railroad. He moved to suburban New Jersey with his family when he was 10 and later enrolled at Fordham, where he developed an interest in urban studies as an undergraduate during the 1970s. “It was an interdisciplinary major, and it gave me the opportunity to take courses with some real prominent Jesuits,” he says, including sociologist Joseph Fitzpatrick, S.J., who later presided at the ceremony when Turvey married his Fordham classmate Patricia Evans, FCRH ’79, and who baptized two of the couple’s three children. 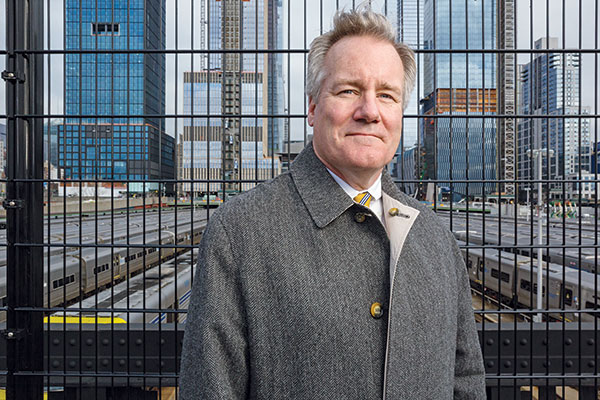 Samuel Turvey on the High Line near 34th Street, with parked Long Island Rail Road cars in the background (Photo by Bud Glick)

In 1983, Turvey earned a J.D. at Fordham Law School, where he was associate editor of the Fordham Urban Law Journal. And throughout his career in legal and financial services, he has been involved in what he calls “public-spirited” pro bono efforts. In the early 1990s, he established the Charlie Parker Jazz Festival, a series of free outdoor concerts in East Village and Harlem parks. He serves on the board of the National Jazz Museum in Harlem, and he’s a trustee of the Noble Maritime Collection at Snug Harbor on Staten Island.

“I’ve worked in New York City my whole career,” says Turvey, a managing director at TIAA. “The city has given a lot to me and my family, and I’m interested in seeing it continue its upward trajectory.”

He sees “a transformative resurrection of the original Penn Station” as part of that.

“How we get the federal government and state governments to work together, I’m not entirely sure. I think the corporate community and the cultural and other communities in New York City need to learn about and rally around this plan, akin to how Lee Iacocca spearheaded the Ellis Island restoration,” he says, adding that “public-private partnerships need to be pursued with vigor.”

And he remains inspired by the democratic spirit of the original station.

“It’s very hard to get people to decide that Penn Station should be on the same plane as Central Park, but in a sense, this is a public space, and you need to think about the city’s need for public spaces,” he says. “Otherwise, it’s just the highest dollar and the region misses a once-in-a-century opportunity to get something so right.” 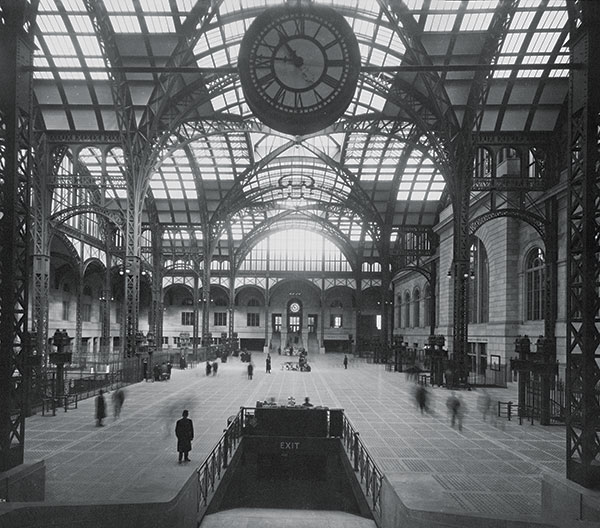