skip to main content
Return to Fordham University
You are at:Home»Fordham Magazine»The Raffettos: New York’s First Family of Pasta
Three generations of Raffettos (from left): Romana holds a portrait of Marcello, who opened the store in 1906, while her sons, Richard and Andrew, stand behind a portrait of their father, Gino. Photo by Leo Sorel
The machine on the left toward the back in Raffetto’s pasta shop at 144 West Houston Street is murderously simple: a squat cast-iron frame holds two conveyor belts with a guillotine in between. Workers slap stacked sheets of fresh pasta, elastic and coated with grains of Durham wheat, onto the belt on the right and feed them toward the blade; the finished product lands and is rolled away by the belt on the left. In five minutes, you could dispose of an entire French aristocratic family that way, which would scarcely have caused more excitement for the customers gathered around the 90-year-old contraption on a recent Saturday afternoon to watch their orders custom-chopped.

The wife turned from a refrigerated display case, where she’d been perusing the ingredients of a Genovese walnut sauce, to observe the blur and racket of the action—thoog-thoog-thoog—and the ease with which a pound and a half of squid-ink fettucine was produced.

Cut pasta has meant business for the Raffettos since 1906, when Marcello, the family patriarch, opened the shop in a neighborhood of immigrants from Italy like himself, only four years removed from Ognio, the hill town of his birth near Genoa. He sold dried egg pasta at five cents a pound, which by 1919 earned him enough to buy the four-story walk-up that holds the storefront. He and his wife moved back to Italy four years later with the birth of their second son, Gino. But they kept ownership of the building while handing the shop over to Marcello’s brother.

Gino bought into the business in 1970. The neighborhood was still an ethnic stronghold, so his fluency in Italian and old-country upbringing served him well. But his customer base was changing. Bob Dylan’s wife Sara came in, son Jakob by her side. So did actor Fred Gwynne of The Munsters, and, even weirder, artists from SoHo. 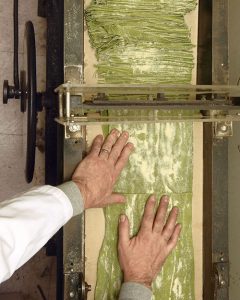 Gino brought his sons, Andrew and Richard, into the business in 1979, when Richard was a student at Fordham and Andrew was applying for admission. The responsibility swamped the brothers’ collegiate experience, especially after New York magazine declared Raffetto’s pasta the best in the city. Richard Raffetto, FCRH ’82, said he chose Fordham partly for its lush Bronx campus, “which I thought I was going to spend time on.” Instead, he and Andrew, FCLC ’84, would rush back from class to meet the demands of what was then the birth of the fresh pasta craze, part of a turn to foods with natural ingredients.

Andrew recalled that by 1982, his sophomore year at Fordham, “the store’s going nuts. We can’t even keep up with the orders, so my brother asked my father, ‘Why does Andrew have to graduate?’ My father said: ‘You finished; he finishes. No one quits without a diploma.’”

Andrew said his degree in sociology came in handy when he and his brother were considering advice some years ago to turn the store into a gourmet food shop that offered items like coffee and bread. He created a survey like he’d learned to do in class and gave it to customers with the promise of a $5 gift certificate for filling it in. “We got 800 answers,” he said. “It was worth it because most of them told us to stick with what we do best: pasta and things that go with pasta.”

But that didn’t mean Raffetto’s couldn’t expand its product line. The store’s seven-page list of offerings includes 16 types of pasta (chestnut, chocolate, saffron) that can be cut eight different ways (angel hair, linguine, pappardelle) and supplemented by 19 types of ravioli (mushroom, smoked mozzarella in a rosemary dough) that beg to be combined with one of 13 sauces (white clam, chestnut cream) created by Andrew and Richard’s mother, Romana, who is 74 and still comes down from her apartment upstairs at 9:30 a.m., Tuesday through Saturday, to open the store. She needs the routine: Her husband, Gino, died last May after 47 years of marriage; working the register keeps her mind off that fact. “It’s my therapy,” she said.

The sauces and ready-made dishes are still prepared in the back of the store—“The customers like the aroma,” Andrew said—but as of last year, the pasta is made in a factory in Moonachie, N.J. For 13 years before that, Raffetto’s fare was cooked up in a converted garage on Leroy Street in Greenwich Village. The site was handy, but the brothers sold the building after seeing certain signs that light manufacturing wasn’t the future of the neighborhood, as when the parking garage across the street was replaced by luxury housing and the Olsen twins moved in.

Richard is happy to live with his family near the Moonachie plant, which he oversees. But there are days he misses the store on Houston Street. He remembers the puzzled look on the faces of the riders of a city bus as they stared down at their driver, who had pulled to the curb before dashing into the store to pay for the ravioli he bought every week. He longs for the coal-oven pizza around the block, and even the guy who came in and created a diversion by spilling a fistful of change on the counter as his partner stuck his hand into the till. “In a way, I miss having to battle the scams,” he said.

Andrew, too, misses playing whiffle ball as a kid in the playground between Sixth Avenue and Sullivan Street, where local don Vincent “The Chin” Gigante came to sit on a bench and pretend he was mentally ill. “We made sure that the ball didn’t hit him in the head,” he said.

These kinds of homely stories are implied when you enter the store and encounter its mix of old and new: roasted garlic goat cheese logs and rare imported olives sharing space with a cash-only register and not a single sign referring to the company website because there isn’t one—all part of the savvy negotiation that is change without loss of soul.

Editor’s note: Since we published this story, Raffetto’s has made at least one concession to modernity: a website, raffettospasta.com, where you can watch a video featuring Sarah Raffetto, a 2013 Fordham graduate and a member of the fourth generation in the family business. “What I look forward to most,” she says, “is maintaining tradition but still pushing the company forward.”