skip to main content
Return to Fordham University
You are at:Home»Fordham Magazine»Features»Pulling Together: On the Enduring Values of Crew, Family, and Philanthropy 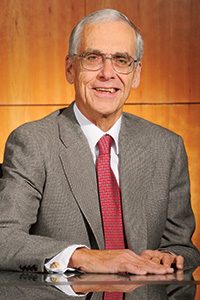 V. John Kriss (above) learned the value of teamwork as a member of the Fordham crew during the late 1950s. Top: The women’s varsity team trains on the Harlem River. Photos by Chris Taggart and Kathryn Gamble

V. John Kriss, FCRH ’62, believes there is something special about crew and the kind of complete education—mind, body, and spirit—it can provide.

“It is a sport unlike most others,” said Kriss, a former member of the Fordham University Board of Trustees and an enthusiastic supporter of the men’s club team and women’s varsity crew at Fordham. “You’re one of eight people in a boat doing exactly the same thing at the same time—dipping the oar in, feeling the pain in your legs, getting out of breath. The agony strikes each of you in the middle of the race, but you’re thinking the same way: If you let up a little bit, somebody else has to pull up the slack.

“By the time you graduate,” he added, “you’ll understand what it means to work as a team.”

Kriss, who retired in 1998 as a senior vice president of American Funds Distributors, said he was “totally green” in 1958 when he tried out for the crew team during his freshman year. “Crew was a way for me to participate at Fordham,” he said.

Although Kriss was new to the sport, his upbringing—as the fifth child and only son of parents who were children of immigrants—left him predisposed to learn crew’s lessons in teamwork and selfless devotion to a common cause.

“My parents didn’t go to high school,” Kriss said, “but they would say to me and my sisters, ‘When you graduate from college’—not if you go to college—‘your life will be different from ours. You’ll advance; you’ll improve; you’ll do better than we did.’”

Kriss’ parents also instilled in him an appreciation for hard work. When he was 9 or 10 years old, he began assisting his father, who was a plumber.

“I started out carrying his pipe from job to job, threading pipe and sweating joints and digging ditches and cleaning sewers,” said the Larchmont, New York, native. “We had no money, and we were aware of it, but it didn’t matter. The family pulled together.”

After graduating from Archbishop Stepinac High School in White Plains, Kriss enrolled at Fordham. He graduated from Fordham College at Rose Hill in 1962 with a degree in economics. After serving in the U.S. Army for several years, he took a job in New York City with Con Edison in the company’s computer department. “I loved the programming but hated sitting around trying to debug programs,” he said. “At this point, I was 25 years old, dead broke, and still owed for college. I thought, if I ever make a nickel, I better find out what I’m going to do with it.”

So Kriss started calling brokerage firms. He took a 50 percent cut in pay, he said, to enter E.F. Hutton’s training program and went about building a business by “cold-calling the Manhattan telephone book for two years.”

“I learned to be very humble,” he said. He stayed with E.F. Hutton for eight years before joining American Funds and moving to California, where he has lived ever since.

Over the next couple of decades, as he built a successful career at American Funds, the value of his Jesuit education became clearer to him. “It was a way of living, a way of thinking,” he said.

Kriss decided to help provide the same kind of educational opportunities he received to current and future Fordham students.

“I started out giving $100 because I got a flyer in the mail,” he said. “Then I thought, I could do better than that. That’s how it started.”

Since then, he has become one of the University’s most steadfast and generous benefactors. In 1997, he established the Mary Lou and John Kriss Endowed Scholarship Fund with a gift of nearly $2 million.

The fund provides renewable awards to students who are members of the crew team. He also has supported the Fordham Fund, among other initiatives.

As a trustee fellow at Fordham, Kriss has the opportunity to meet a lot of current students, something he relishes. “I’ve been coming to Fordham four or five times a year for the past 13 years, and I generally have breakfast in the cafeteria with the members of the crew team. We just sit around and talk—about school, the people they’re dating, and what they’re planning to do after college.

“I contribute to Fordham because I hope I can offer what I got to other people, and it doesn’t matter that they know who I am,” he said. “It matters that 20 or 30 years from now, they wake up and say, ‘I’ve become somebody.’”