skip to main content
Return to Fordham University
You are at:Home»Fordham Magazine»Features»Pro Football’s Biggest Issues Are Labor Issues, Expert Says
During a recent Fordham at the Forefront lecture, Gabelli School professor Mark Conrad spoke about some of the most pressing issues in sports business today. Photos by Dana Maxson
The NFL in recent years has faced a string of high-profile controversies, from the handling of Ray Rice’s domestic violence case to the New England Patriots’ “deflategate” ordeal to the league’s since-retracted edict that players must either stand for the national anthem or remain in the locker room.

Each has involved a very different set of circumstances, but as Mark Conrad, associate professor of law and ethics and the director of the sports business concentration at the Gabelli School of Business, explained at a Fordham at the Forefront event at the University’s Lincoln Center campus on November 19, many of the tensions in the league today are ultimately labor issues.

Pro sports commissioners, Conrad explained, were once all-powerful within their given leagues, but in the age of collective bargaining, that doesn’t have to be the case. “The only check on the power of sports leagues, regarding labor, are unions,” Conrad said. Indeed, pro sports unions “are one of the few private employee unions that have thrived” during a time when the percentage of the American labor force in a union is around 10 percent—and dropping.

But Conrad explained that members of the NFL Players Association, which last negotiated a contract in 2011, are “probably kicking themselves” for allowing NFL commissioner Roger Goodell to retain so much power. “They allowed the commissioner to be the judge, jury, and appeals court on various disciplinary matters,” said Conrad. “They allowed it in their last contract negotiation. You know that they don’t want to have that happen again.”

In other words, with the NFL’s collective bargaining agreement expiring in 2020: stay tuned.

The Biggest Issues Off the Field

Over the course of the evening, Conrad led a discussion on some of the most pressing issues in the world of sports business today. Along with the talk on governance in the NFL, he covered four other big topics: the professionalization of college sports, ethics and international sports, legalized sports gambling, and the recent NHL concussion settlement, mixing in talk of current trends, relevant court cases, and a dialogue with students and alumni in the audience. 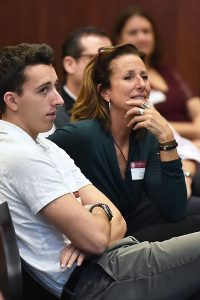 The conversation about the changing state of collegiate sports was a particularly lively one.

“The old model has been breaking down in what I’d call the big money sports,” said Conrad, whose book The Business of Sports, initially published by Routledge in 2006, was released in a third edition last year. He paid special attention to one of the most hotly debated NCAA rules: the one that prohibits student-athletes from receiving compensation beyond cost of attendance at a school. “I think what’s happening is the economics, the business, the pressure, and the law are slowly going against the NCAA’s attempt to do this.”

Conrad gave the example of students at a school like Indiana University, which has both a storied basketball program and a renowned music conservatory. “A music student can do a gig on the weekend with a local orchestra and be paid a hundred bucks. And they do,” said Conrad. “But a student-athlete [who]even gives lessons in what he wants do … that would affect eligibility. That’s gotta go. That really is something that smacks of economic oppression.” 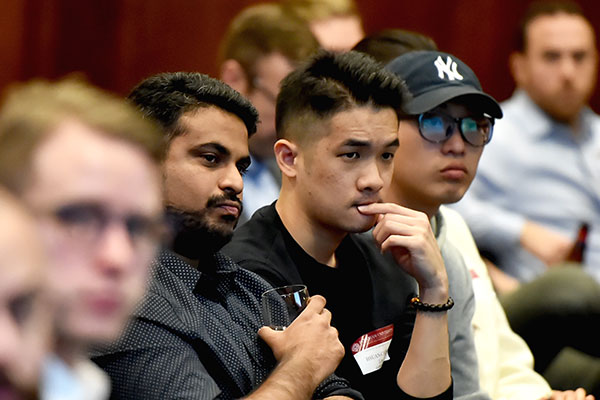 Keeping Up with Industry Trends

Phil Acocella, FCRH ’11, an attendee who worked at WFUV as a student, says he remembers Conrad from his time at the radio station. “He was a frequent guest on WFUV, and he always brought a sense of expertise and knowledge to the broadcast,” said Acocella.

Acocella, who now works at SportsNet New York, said he attended the event because he’s a big sports fan looking to hear about industry trends, and because he was interested in connecting with fellow alumni.

“It’s a great opportunity to not only network but to see what Fordham’s offering in the world of sports,” he said. “Events like this are one of the best things that Fordham offers postgraduation.”

The Office of Alumni relations established the Fordham at the Forefront lecture series in 2012 to demonstrate “Fordham’s leadership in areas of universal relevance and concern,” and to deliver “a measure of lifelong learning to alumni, parents, and friends in cities throughout the world.”