skip to main content
Return to Fordham University
You are at:Home»Editor's Picks»Posthumous Gift Comes to Fordham from Sports Broadcasting Legend Vin Scully
Vincent E. “Vin” Scully, FCRH ’49. Photo by Avis Mandel
Before he passed away in August, legendary sports broadcaster Vin Scully, FCRH ’49, left $1 million to Fordham University and the same amount to Fordham Preparatory School, two institutions that shaped his life and career—and which always retained a special place in his heart.

On Oct. 31, administrators from both schools met at the Rose Hill campus with Tania Tetlow, president of Fordham, and the executor of Scully’s estate to accept the gift to the University and to speak to the importance of Scully’s legacy. “With this gift, we celebrate Vin’s talents and fundamental decency, and teach them to the next generation,” Tetlow said.

“He loved these schools, and this is a way for him to express his gratitude,” said the executor, Edward White, during the meeting. He visited both schools to go over the gifts, which can be used however each institution sees fit.

Also on hand to celebrate the gift were Ed Kull, Fordham’s athletic director, and Chuck Singleton, general manager of WFUV, Fordham’s public media station, where Scully worked as a student broadcaster before gaining renown as the Voice of the Dodgers, the baseball franchise that moved from Brooklyn, New York, to Los Angeles in 1957.

Sometimes referred to as the Velvet Voice, Scully was beloved for his eloquence and iconic style as an announcer, and provided inspiration for generations of sports broadcasters. Scully served the Dodgers for 67 years, retiring in 2016. He was 94 at the time of his passing on August 2.

His many awards and honors include induction into the University’s Hall of Honor and into the broadcasters’ wing of the National Baseball Hall of Fame, as well as a Presidential Medal of Freedom bestowed by President Barack Obama in 2016.

On Nov. 1, Scully was honored with a video tribute at WFUV’s annual On the Record awards dinner. On March 20, he will be honored with a posthumous Founder’s Award at the 2023 Fordham Founder’s Dinner, to be held at The Glasshouse in Manhattan, with Scully’s family accepting the award on his behalf. Two days later, on March 22, the archbishop of New York, Cardinal Timothy Dolan, will celebrate a memorial Mass in Scully’s honor at St. Patrick’s Cathedral at 10 a.m.

In addition, the press box at Houlihan Park at Jack Coffey Field will be renamed in Scully’s honor, among other initiatives to honor his legacy, the University announced on Nov. 14.

The son of Irish immigrants, Vincent Edward Scully graduated from Fordham Prep in 1944 and went on to call baseball, basketball, and football games for WFUV—which was founded during his student years at Fordham College at Rose Hill.

“WFUV turns 75 this fall, and in the beginning, there was Vin Scully,” Singleton said. “Vin set the tone in 1947, and his influence echoes today in the quality work of WFUV’s talented young sports journalists.”

Scully kept up with Fordham over the years, taking interviews from FUV student journalists, hosting some workshops for them, and returning to campus as commencement speaker in 2000 and receiving an honorary doctorate from the University. His presence is also felt in Fordham athletics, since he played for the baseball team as a student.

In remarks after the meeting, Kull said Scully was “more than just a voice; he was an institution and a true master of his craft.”

“The impact he made on not only baseball, but the entire sports media industry, is humbling,” Kull said. “His story, with his Fordham and Bronx roots, continues to inspire our Rams and the entire Fordham family.”

A Bond with Fordham

Scully’s Fordham baseball career included a game against Yale, whose team included a future U.S. president, George H.W. Bush. When Bush was president, he met Scully for golf and later sent him a framed photo taken of them, White noted at the meeting. 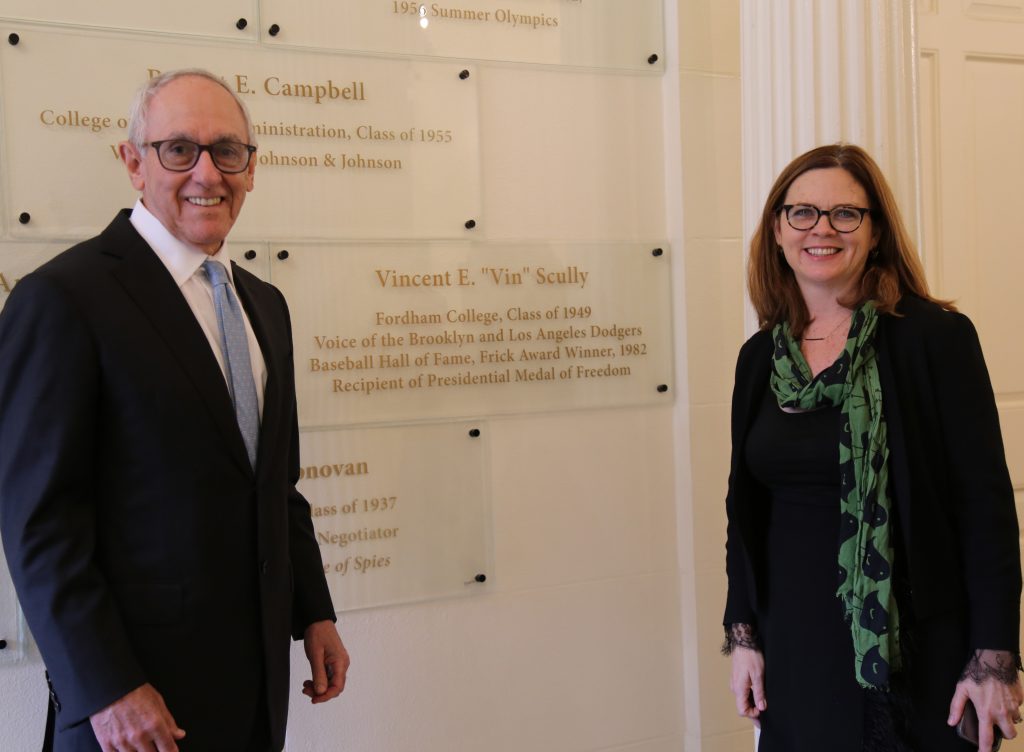 Edward White, executor of Vin Scully’s estate, with Fordham’s president, Tania Tetlow, at the Hall of Honor in Cunniffe House on the Rose Hill campus. Photo by Dana Gibbs, courtesy of Fordham Prep

“He frequently spoke very fondly of his experience at WFUV, and always felt that he was a part of the Fordham family … and wanted to contribute equally to Fordham Prep and Fordham University, which is exactly what he did,” said White, Scully’s business manager and friend for over 40 years, after the meeting.

“As a lifelong Catholic, he had a deep appreciation for the faith foundation provided at this exceptional Jesuit institution,” said White, senior partner with Edward White & Co., LLP, in Woodland Hills, California. He noted that Scully sponsored him during his own conversion to Catholicism. “He loved the foundation that he received, spiritually and academically. Every time he spoke of Fordham, it was glowing.”

He sometimes glimpsed Scully’s kindness and generosity—as well as his fame—while traveling with him, along with Scully’s late wife, Sandra, and his own wife, Mary White, who also attended the Oct. 31 meeting.

“Wherever we went, he was so well received, and so appreciated and so loved, and people would oftentimes stand in line to see if they couldn’t get his autograph or if they could have a photograph of him,” White said. “He was very thoughtful and compassionate to everyone. Whether he was speaking to a parking attendant or a most senior person [in politics]or in the commercial world, he treated everyone equally.”

During his trip to New York, White attended another event with a small Fordham connection—a Nov. 1 ceremony in which another client of his, the late singer and actress Lena Horne, a 1997 Fordham honorary degree recipient, became the first Black woman to have a Broadway theater named after her.

It was a joy to see where Scully attended school, White said. “He was truly a wonderful, giving, loving human being. We all loved him. We miss him indeed.”