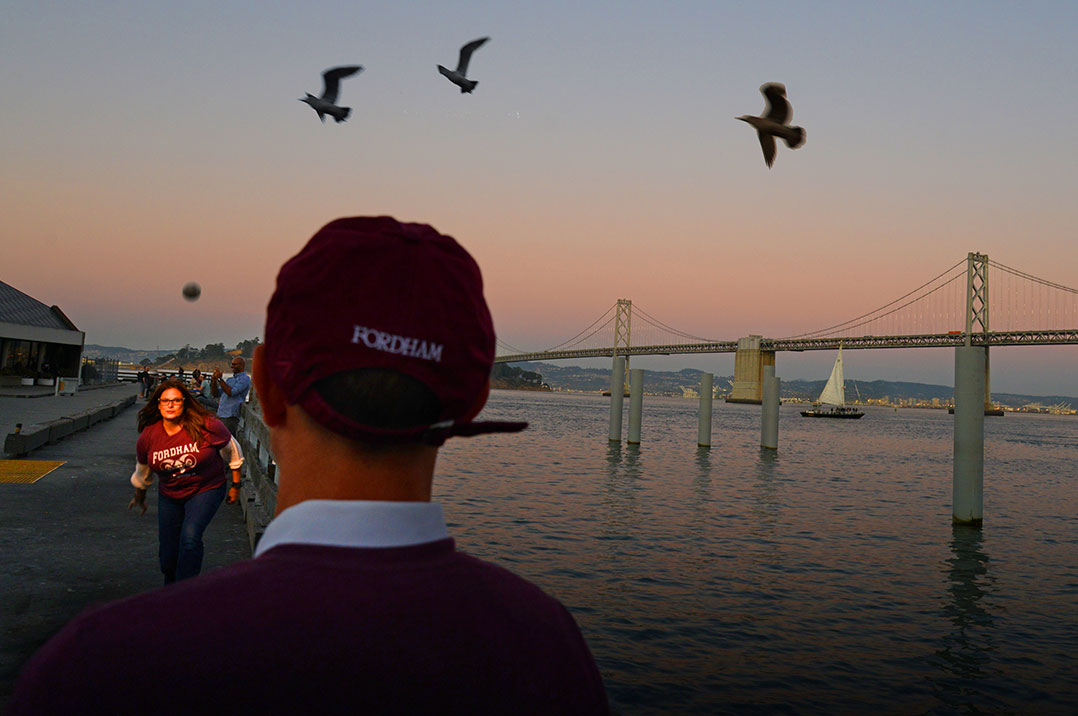 Above: Christina Chiaramonte, LAW ’96, practices bocce throws outside the Ferry Terminal Building on San Francisco’s Embarcadero, October 2019. Words and image by B.A. Van Sise, FCLC ’05
Watching the players of San Francisco’s Ferry Bocce league during an autumn sunset, one could be forgiven for thinking they were anywhen else but now.

As vintage trolleys roar and clang past down that city’s charming waterfront Embarcadero, teams of loosely affiliated local groups—company clubs, government employees, and the Bronx Ballers, a group of Bay Area Fordham alumni—roll bocce balls down two even, well-maintained lanes. The sport they’re playing was originally an Italian peasant game, a variant of lawn bowling, brought over in the 1800s by southern Italian immigrants and passed down over a century and a half, sparingly, to their grandchildren and theirs.

It’s a world that feels distant, right now, but one that will be ours again. As the players take part in a pastime that largely dwindled in its mother country a century ago, dancy modern remixes of tinny music nearly just as old—think Al Jolson and early Nat King Cole, if they’d heard of hip-hop—play over adjoining speakers. No matter how hot it might be in sunny California, here on the shorefront bocce court it is a cool, refreshing 1927.

The team is always looking for new players, always, and their Fordham paraphernalia reliably attract the attention of one or two far-flung alumni during any given match. Team captain Mark Di Giorgio, FCRH ’87, keeps an eye out for new recruits, pointing out that no one takes it seriously, and no real skill is required. “If someone can do this,” he says, holding up a glass of red wine in one hand and a bocce ball in the other, “and talk at the same time, well, they can play.”