skip to main content
Return to Fordham University
You are at:Home»Fordham Magazine»Features»One School, One Mission

At the newly unified Gabelli School of Business, faculty and students focus on value, ethics, and purpose.

Renowned value investor, philanthropist, and Fordham alumnus Mario J. Gabelli (above) joined Fordham students in February to celebrate the launch of the combined school of business that bears his name.

(Photo by Bruce Gilbert)It’s been a year of new beginnings for business education at Fordham. Last fall, the University launched a bachelor’s degree program at the Lincoln Center campus, welcoming an initial cohort of 81 students. And on February 25, Fordham unified its undergraduate, graduate, and executive programs as the Gabelli School of Business.

“It would be hard to overemphasize the importance of the business schools’ unification,” said Joseph M. McShane, SJ, president of Fordham. “Having a single school led by the very capable Dean Rapaccioli will mean a better education for both graduate and undergraduate students. And putting both schools under the Gabelli name makes Fordham business more recognizable, nationally and internationally.”

An Investment in Values

One day after the University announced the unification of the schools, Father McShane thanked Mario Gabelli ’65, chairman and CEO of GAMCO Investors, Inc., and his wife, Regina Pitaro, FCRH ’76, for their “great generosity” and their “vision and dedication to Fordham.”

“Mario has spoken often in the context of his visits to the University about education as a great equalizer, and the heart and soul and the driver behind the American meritocracy,” Father McShane said. “He’s a believer in it, and he’s achieved it as well.” 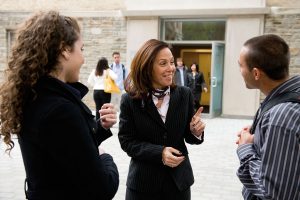 Gabelli and Pitaro were at Rose Hill in February for the installation of Sris Chatterjee, PhD, as the inaugural holder of the Gabelli Chair in Global Security Analysis (see page 4). Gabelli’s $25 million gift to the University in 2010—the largest in Fordham history—made possible both the new faculty chair and the Gabelli Center for Global Security Analysis, which is focused on value investing.

He has also funded the Gabelli PhD Program, which will establish a doctoral-level business program at Fordham.

On March 19, Rapaccioli appeared with Gabelli on the CNBC show Squawk Box to talk about her vision for the school. “We’re really using New York as our platform for education,” she said, adding: “We have a global vision where we’re bringing Fordham to the world and the world to Fordham, with campuses in London, a strong partnership with Peking University in Beijing, and global partners all over the world.”

Both Rapaccioli and Gabelli countered the argument that MBA degrees are not as needed in the current business climate as they used to be. “I think the number of people that are getting an MBA has declined, but the value has not,” said Rapaccioli, who noted that a Fordham business education is about “marrying the important technical skills” with “soft leadership skills.”

“Employers tell me every day that they need people who can solve problems, people that work in teams, people that are really comfortable with uncertainty and ambiguity,” she said, “and these are the things we’ve built into the curriculum.”

That begins on the undergraduate level, with an emphasis on the liberal arts—subjects that often face great scrutiny about their practical value in the marketplace. For Rapaccioli, however, there is a fundamental benefit to centering an undergraduate business curriculum on a liberal arts core.

“Many technical skills necessary to get a job today will be obsolete in a few years,” she said. “Successful employees—and good leaders—need the ability to adapt to a rapidly changing world. They also need an ethical grounding and a nuanced worldview [to develop]one of the most important attributes any business person can possess: integrity.”

A Sense of Purpose

A liberal arts education is useful not just for cultivating a different kind of skill set, however, she said. She believes that the depth it adds to a student’s overall education is inherently valuable—both for the student’s personal growth and for the sake of the business environments they are entering. “There are many good business schools and many outstanding business students,” she said. “What students get here that they may not get elsewhere is a sense of purpose … a strong idea of his or her place in the world.”

With reporting by Patrick Verel and Joanna Mercuri