skip to main content
Return to Fordham University
You are at:Home»Fordham Magazine»Features»On New Album, Fordham Graduate Kevin Devine Expands Sound and Takes On ‘Fertile Project’ of Self-Exploration
Photo by Erik Tanner
Kevin Devine didn’t set out to make a pandemic record. In fact, most of the songs that appear on the 2001 Fordham College at Lincoln Center graduate’s new album, Nothing’s Real, So Nothing’s Wrong, were written in 2019, before COVID-19 reshaped the world at large and the music industry, specifically.

By the end of 2019, just as the virus was starting to make headlines across Asia, Devine and his frequent collaborator and producer, Chris Bracco, had begun to talk about turning those songs into an album. In early March 2020, Devine went to Bracco’s house in Connecticut, where they recorded some of album’s foundational sounds. He then planned to go through his usual quick cycle: finish recording in April, mix the album in May, master it in June, tour in the fall.

Instead, once the public health crisis made clear that traditional recording and touring would not be possible for the foreseeable future, Devine found himself with a luxury he hadn’t experienced much over his prolific career: extra time. The head of his record label, Triple Crown Records, assured him there was no rush to complete the album, which left Devine with plenty of room to experiment.

“I’m sure we would’ve made a compelling record [in 2020], but I can guarantee you, we would not have made the record we made,” Devine says. “It was nice to get some distance and perspective and come back to it with fresh ears. And I think that afforded us the opportunity to thoroughly explore every little weird thought and idea we had.” 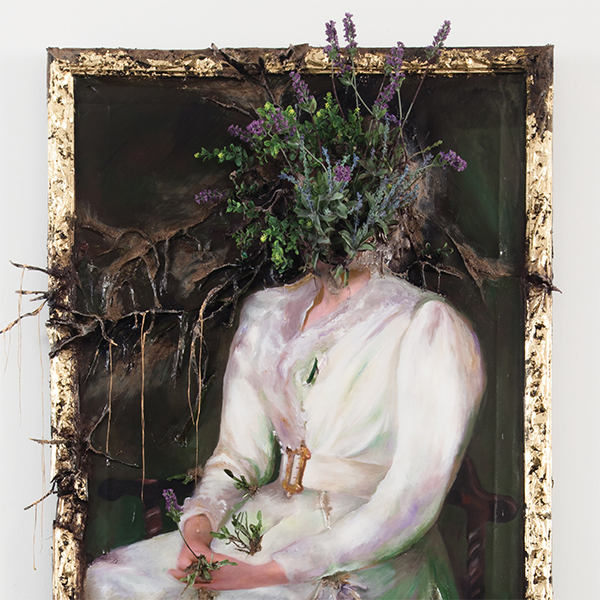 The album cover for ”Nothing’s Real, So Nothing’s Wrong,” designed by Valerie Hegarty

Those weird thoughts and ideas culminated in an album that finds Devine exploring an expansive sonic landscape, with a more lush, psychedelic sound than anything he’s done on his nine previous solo records, or in his work prior to that in the band Miracle of 86. Among the reference points he cites for the album are the Beatles’ White Album, Wilco’s A Ghost is Born, and Elliott Smith’s From a Basement on the Hill—all works filled with experimental touches built atop foundations of more traditional rock and pop songwriting.

“We knew this was something we wanted to be a little bit more textured, layered, swirly, creepy,” Devine says.

A Music Career Shaped by Time at Fordham

Devine grew up in Brooklyn and Staten Island and started his first band, Delusion, as a teenager. That band would become Miracle of 86, which found some success in the punk and emo scene around the turn of the millennium, touring the U.S., Canada, and Europe, and releasing three full-length albums, the first of which—2000’s Miracle of 86 (Fade Away)—came out the November of Devine’s senior year at Fordham College at Lincoln Center.

Devine had enrolled at Fordham in 1998, where he double-majored in English and communication and media studies and lived in McMahon Hall for four years. He also wrote for and became features editor of The Observer, the student newspaper based at the Lincoln Center campus. While he took his studies seriously, Devine also used his time at Fordham to develop as a solo performer. He played shows around the city and on campus, and by the time he graduated in 2001, he had to decide whether to pursue a career in journalism or focus on his music.

In a 2012 profile of Devine in The Observer, Elizabeth Stone, Ph.D., the paper’s adviser during Devine’s time and still a friend of the musician’s today, recalled him telling her, “I have to give this music thing a shot. I’ll probably do something else in a year, but I’ve got to do this music thing. I’ll never forgive myself if I don’t.”

A year after graduating, Devine released his first solo album, Circle Gets the Square, on Immigrant Sun Records. The album was more personal and introspective than Devine’s work with Miracle of 86, and he continued to write and play solo shows while working day jobs. His next two albums, 2003’s Make the Clocks Move and 2005’s Split the Country, Split the Street, were both released on Triple Crown, and with them, Devine toured more extensively and grew his fan base by opening for acts like Brand New.

Since then, Devine has made a career as a prolific artist. In addition to his 10 LPs, he has released nearly a dozen EPs, several live albums, 12 split 7-inch records as part of his Devinyl Splits Series, and three albums as part of Bad Books, a project he started with Andy Hull of the band Manchester Orchestra. And over the years, along with numerous headlining tours, he has opened for artists like the Get Up Kids and Bright Eyes and played festivals like Coachella, Bonnaroo, and Lollapalooza.

While his path to music industry success differed from those of his peers who started touring widely as teenagers and forewent college, Devine says that his time at Fordham was an important part of his development not only as a person but as a songwriter. 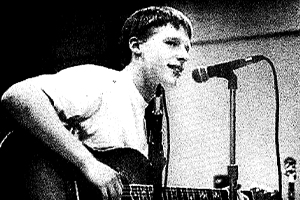 Devine playing solo during his days at Fordham. Photo courtesy of the Observer archives.

“I feel like it was an immersive environment through which to learn ways to interpret and interpolate the world,” he says of his college experience, recalling a piece of journalism advice he got in a class with Professor Joseph Dembo: “Specificity breeds believability.”

“That’s something that is a big part of how I see the world and how I try to write,” Devine says. “To interrogate, to ask questions—I feel like that part of journalism continues to be a central aspect of what I do as a songwriter. If I had started [touring full-time] three years earlier, I would’ve missed what I got to do [at Fordham], and I actually think it would’ve had a detrimental impact on what I’ve done as a musician.”

Beyond academics and critical thinking, Devine says that he met many of his closest friends at Fordham, and he tries to visit the Lincoln Center campus at least once a year just to walk around or catch up with Stone over a cup of coffee.

“My experience at Fordham was formative and foundational in the sense that I feel like it furthered the project, in a very meaningful way, of exploring an idea of who [I am],” he says.

‘Navigating the Complexities of Personhood’

That exploration of the self is a central theme of Nothing’s Real, So Nothing’s Wrong.

“What I think I’ve always tried to do,” Devine says, “is to try to capture what it was like for this person to be navigating the complexities of personhood at this given moment. That tends to be the project for me. Which is a fertile project, because I think being a person’s pretty complex.

“This record, I would say, is a lot of liminal subconscious examinations of pivot points in life, places where you are examining where certain defenses or survival traits may no longer serve you. The ways in which we could be trying to protect ourselves, but really [are] pushing people away. That weird dance on the head of a pin between, ‘What is a boundary that is healthy and what is me removing myself from things that are actually good for me?’”

And while none of the songs are overtly about politics or the pandemic, the album also grapples with how to make peace with oneself in a world of pain and suffering. When the album’s first single, “Albatross,” was released in January, Devine described it as “a hard reboot, a fragmented emptying-out for us strugglers whose life experience invalidates cookie-cutter solutions or miracle cures or 21st-century coping mechanisms.”

He is quick to point out that that “emptying-out” does not mean ignoring the suffering of others or forgoing responsibility for one’s actions.

“It’s not about an abdication,” he says. “Therapists talk about how guilt and shame are useless; wise remorse is actually a more fruitful way to move around in that which we have done, because it indicates a willingness to learn something and a way to detach from being completely self-lacerative. … What’s the most actionable philosophy to get through the day?”

Or, as he says about the meaning behind another album highlight, “Override”: “How do I get rooted while the Earth moves all around me?”

Staying Grounded and Returning to the Road

For Devine, staying rooted includes finding time to meditate and practice gratitude. He was raised Irish Catholic, and while he no longer considers himself to be a Christian, he says that his religious upbringing is “deeply embedded” within him and he still finds value in praying. 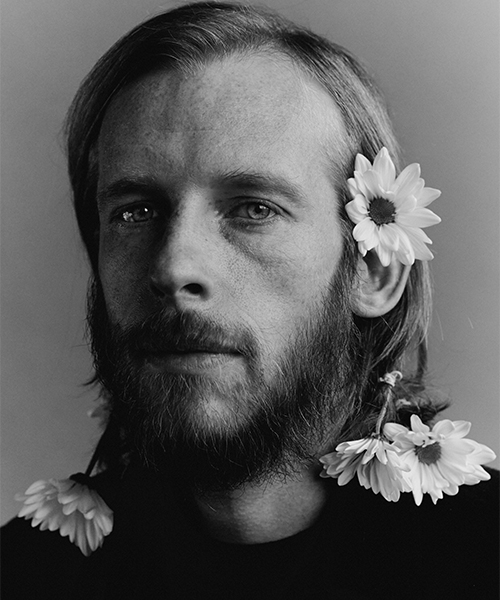 “Stopping in any given point in a day to say a few things for which you’re thankful and say a few things with which you’d like some help—that’s the guts of it,” he says of his prayer routine, adding that meditation gives him “five to 10 minutes a day where I’m separated from the noise of existence for that time.”

Another thing that grounds Devine—and that served as a point of reflection while writing the songs on Nothing’s Real—is being the father to a 6-year-old daughter, which he says is his “most important job.” When he begins a six-week U.S. tour in early April, it will be the longest he’s been away from home since his daughter was born, which he says has caused him some ambivalence, despite being excited to perform the new album’s songs in front of fans.

For many musicians, a return to touring after COVID-related cancellations will also mean a return to earning a living—something that has been difficult for artists who rely on playing shows to bring in income. Devine says that he has been fortunate not to face as much economic devastation as many of his peers, though, which has largely been the result of the Patreon subscription service he launched at the beginning of the pandemic.

“We’ve had such a miraculous success story with the Patreon,” Devine says of the service, which allows fans to pay a monthly membership fee in order to gain access to exclusive songs (both originals and covers), livestreams, discounts on merch, and more. “I have been really fortunate not to be financially ravaged by this, and it’s been almost [entirely] because of the Patreon.”

In monthly videos in which Devine answers submitted questions, it’s clear that he has a special relationship with his fans, who ask him everything from what inspired certain songs to what his favorite vegan meals to cook are. That loyal following is further shown by at least two people getting tattoos inspired by the new album.

Regardless of whether he continues to embark on tours as big as the upcoming one (“Maybe I’ll do it until I physically can’t. Maybe in five years, I’ll be like, ‘I don’t want to do this anymore,’” he says), Nothing’s Real, So Nothing’s Wrong proves that he has plenty of room to grow what has already been a long, successful career—one that has offered both him and his fans a chance to find communion in music during difficult times, something alluded to in a lyric from “Albatross”:

“If you’re sinking, sing along.”