skip to main content
Return to Fordham University
You are at:Home»Fordham Magazine»Features»On Many Things: A Journalist’s Lessons Learned from Father O’Hare
An essay by John Breunig, FCRH ’85. Above (from left): Fordham Ram editors Breunig and Dan Vincelette, FCRH ’85, interview Joseph A. O’Hare, S.J., then president of Fordham, in Father O’Hare’s office at Rose Hill, 1984. Image courtesy of John Breunig
Countless descriptors have been offered about Father Joseph A. O’Hare in the wake of his death. He is remembered as a humorist, a humanist, a visionary, an intellectual, “a regular Joe.”

He also earned the homage any reflective opinion writer should pursue: Fair.

I met Father O’Hare while I was The Ram’s editor in 1984 and he was transitioning into a new career. We were both outsiders. I was billed as the first commuter to become editor. He came to academia from a stint as editor of America, an opinion magazine for which he wrote the column “Of Many Things.”

“I was engaged in telling the world how to behave,” he liked to say.

I wasn’t big on opinion back then, and through much of my journalism career I stood firmly on the facts side of the newsroom wall. These days I facilitate public opinion and write editorials and a column named “Look at it this Way,” a nod to the importance of alternate perspectives.

A few days after his inauguration that fall, Father O’Hare sat for a lengthy interview we published in a special section of The Ram. Executive Editor Dan Vincelette and I weren’t sure what to expect, but Father O’Hare played host like we were members of a secret journalism club. He even shared gossip about legendary advice columnist Ann Landers pursuing him as a possible consultant to help her answer letters.

He put us so at ease that we showed a little hubris in opening the Q-and-A by asking, “Why does Joe O’Hare deserve an inauguration when no other president in the last 50 years has had one?” 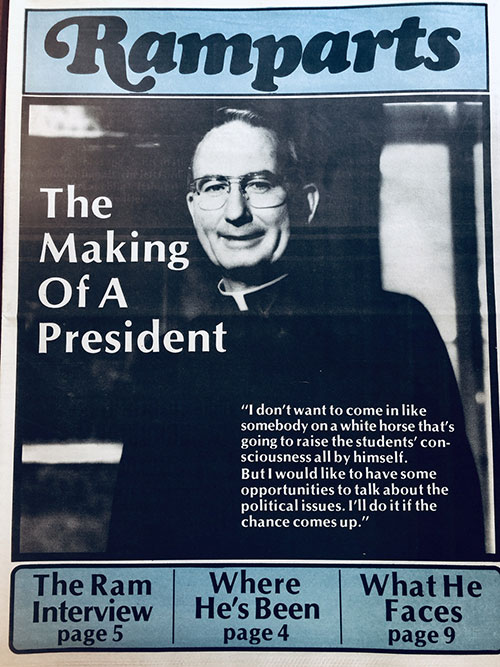 While researching his background, we learned he was tagged at America with the nickname “Joe Cool.” We learned why during the interview. No query caused him to flinch, even when we challenged him about divesting holdings from South Africa or about the university declining to recognize the student group Fordham Lesbians and Gays. (He pledged to combat discrimination, but hedged at official approval. Today, Fordham hosts two student groups, the Pride Alliance and the Rainbow Alliance, as well as the Rainbow Rams alumni chapter).

He invited us to gaze into his crystal ball, citing a need to invest in the Rose Hill library (“We really have to do something about it”). It was a promise fulfilled with the debut of the William D. Walsh Family Library 13 years later, a fitting legacy for this man of words.

The conversation continued after the notebooks closed, but Father O’Hare took over asking the questions. An outdoor modern art installation on campus faced hostility from students, and he invited our opinion. He expressed appreciation for our insights. I appreciated being heard.

Lessons that day—and in ones to follow—linger as a master class in the art of rhetoric, of candor, of transparency.

Father O’Hare told us he hoped to be at the helm for at least seven years. He stayed for 19, the longest tenure in the university’s 179 years.

“The trick is to make Fordham [be] perceived as a national institution but keep the character that is distinctly New York,” he said in framing his vision.

He pulled off the trick. That’s not just an opinion.

—John Breunig, FCRH ’85, is the editorial page editor and a columnist for The Stamford Advocate and Greenwich Time.