skip to main content
Return to Fordham University
You are at:Home»Fordham Magazine»Featured Image»On Guardian Angels: A New York Photographer Reflects on His Catholic Roots
By Larry Racioppo, FCRH ’72
At Saint Michael the Archangel grammar school in Brooklyn, they taught us that each and every person had their own guardian angel. I believed it in some way, but never really thought about it. It was just part of growing up in an Italian- American Catholic family in a working-class Brooklyn neighborhood in the 1950s.

I’m 72 years old now and no longer remember exactly when I stopped being a “practicing Catholic.” As Ernest Hemingway wrote about going bankrupt, it happened gradually, then suddenly.

While at Fordham from 1965 to 1968, I learned about other religions and spiritual practices, other traditions and virgin births. My worldview simply expanded and eventually my parents’ and grandparents’ faith was no longer mine.

Or so I thought. In 1971 I began photographing, first in Brooklyn, then throughout New York City. As I published and exhibited my work in the following decades, I became increasingly aware that many of my extended projects focused on some aspect of religion. Hidden or neglected, my Catholic roots had influenced my choice of subjects.

In 2005, the Museum of Biblical Art presented 80 of my photographs in The Word on the Street. The photographs in this exhibit captured various forms of religious expression in everyday New York City life: from memorial walls with paintings of Sacred Hearts to crucifix tattoos and home altars.

When asked in a 2002 PBS interview about the distinctive essence of being an American Catholic, the priest, sociologist, and novelist Andrew Greeley emphasized the power of traditional Catholic imagery. “They like the stories. Christmas, Easter, May crowning, the souls in purgatory, the saints, the angels, the mother of Jesus. These are enormously powerful religious images.”

This insight has proven especially true for me because religion was intertwined with ethnicity and geography. The flickering candles and statues of saints on my grandmother’s dresser in her Brooklyn apartment fascinated me when I was a boy. I photographed it in 1975 and 30 years later made a print of it for The Word on the Street.

Because of the coronavirus pandemic, I began sheltering at home in early March.  I’ve had even more time to think about how these themes have affected my work. I’ve been looking at contact sheets from the 1980s and scanning negatives I never printed. I photographed the top half of an old calendar on the wall of my Park Slope apartment in 1983. 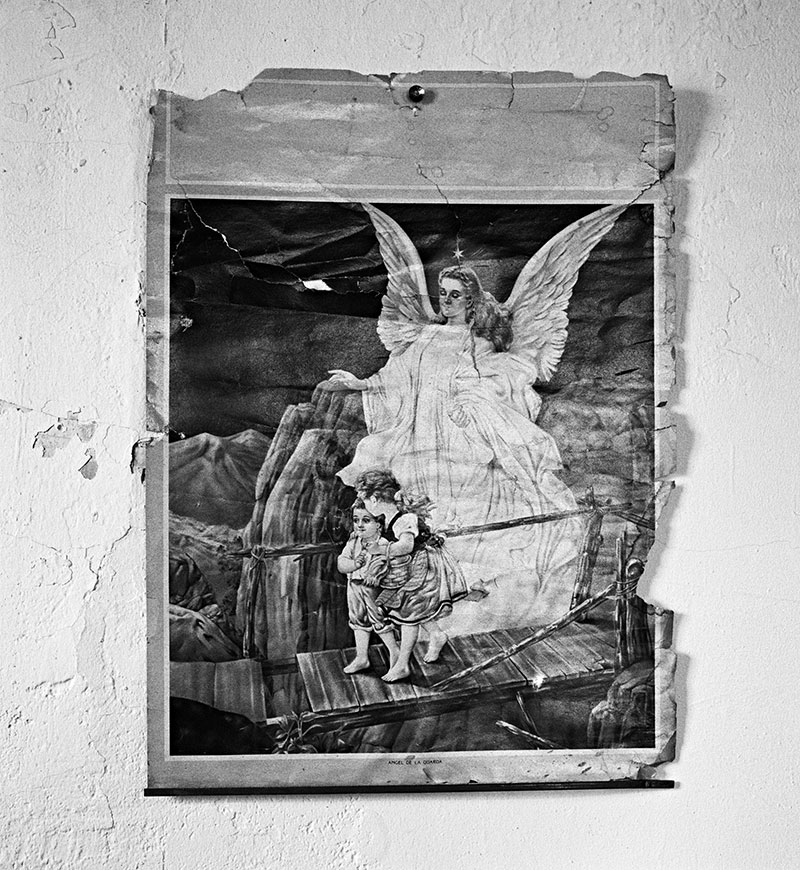 This image of a guardian angel and two children crossing a bridge is well known and frequently reproduced. It reminds me of the schoolbooks I had as a child. A drawing in one of them depicts my guardian angel with its hands on my shoulder as I cross the street.

—Larry Racioppo, FCRH ’72, was the staff photographer for New York City’s Department of Housing Preservation and Development for more than 20 years. He has earned several grants, including a Guggenheim Fellowship, for his own work documenting the urban landscape. His most recent books are B-BALL NYC (South Brooklyn Boy Publishing, 2019) and Brooklyn Before: Photographs, 1971–1983 (Cornell University Press, 2018).