skip to main content
Return to Fordham University
You are at:Home»Fordham Magazine»On Fordham Night at Yankee Stadium, Ram Spirit Runs High
Story by Joe DeLessio | Photos by Sirin Samman
The Fordham alumni who attended the September 8 Yankees game in the Bronx didn’t get to see a win for the home team, but at least they had a lot of fellow Rams around to commiserate with as the first-place Yanks’ once-impressive division lead continued to shrink.

More than 1,300 people joined the Fordham University Alumni Association at Yankee Stadium to watch the Twins squeak out a 4-3 victory over the Bronx Bombers on a night that began with a pregame reception for alumni at Yankee Tavern on 161st Street, continued with the distribution of special-edition, Fordham-branded Yankees jerseys inside the gate, and featured no shortage of Rams apparel and block Fs mixed in with the pinstripes and famous interlocking “NY” logo of the Yankees.

Some in the Fordham contingent were seated in right field, just below the Yankee Stadium “Judge’s Chambers” section and a baseball’s toss away from the super-slugging Aaron Judge himself. Among them was the University’s new president, Tania Tetlow, who attended with her husband and daughter and paid a pre-game visit to the press level, where she met with broadcasters Michael Kay FCRH ’82, and Justin Shackil, FCRH ’09, as well as Greg Colello, FCRH ’07, senior director of scoreboard and video production at Yankee Stadium. 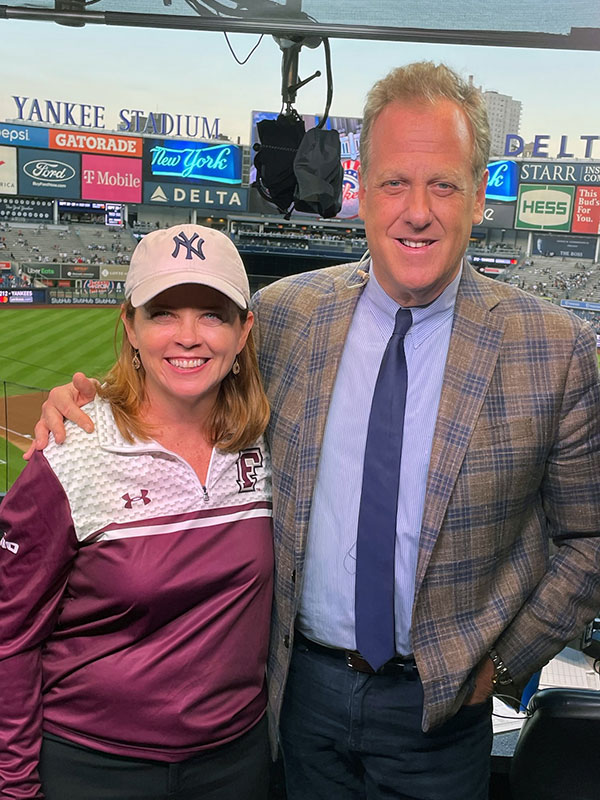 Prior to the game, Tania Tetlow, president of Fordham, met with Yankees play-by-play announcer Michael Kay, FCRH ’82, in the broadcast booth. Photo courtesy of Ed Kull

“It’s clear that Fordham loyalty runs deep,” said Tetlow on the strong turnout from Fordham grads. “It’s so exciting to know how much Fordham alumni want to come together and to be at the other heart of the Bronx, Yankee Stadium.”

‘So Much Fordham Spirit Up in the Bronx’

It wasn’t Tetlow’s first game in the Bronx: She said her family had taken one in earlier in the summer, when they first arrived in New York. “We got our requisite gear and hats and started training our daughter, Lucy, on the joy of baseball,” she said. The family’s allegiances had been up for grabs because their former home, New Orleans, doesn’t have a big-league team. But Tetlow said their rooting interests are settled now: “We are fully committed to the Yankees.”

Fordham trustee Kim Bepler said she was excited that large groups could once again gather for “fantastic” events like this. “People want to be with people, and what’s better than going to Yankee Stadium?” she said. “And part of the joy of this is also accompanying our new president. So I get to see her cheer on the Yankees with her family.”

“I think it’s amazing,” she said. “It’s so great to see so much maroon and so much Fordham spirit up in the Bronx. And I think it’s really important as Fordham continues to unify all of its schools to have an event like this, where you have alumni from all the undergraduate colleges, as well as the graduate schools, all be able to come together and then celebrate.”

A Ram on the Mound, Camaraderie in the Stands

The Fordham grads in attendance got to see one of their own on the field: Greg Weissert, GABELLI ’18, who made his big-league debut on August 25, becoming the first Fordham grad to play for the Yankees since Johnny Murphy in 1946.

Weissert’s appearance in the Fordham Night game marked the seventh outing of his rookie season, in which he’s shown off deceptive sinkers and sliders, as well as a wicked two-seam fastball. A day after picking up a win with an efficient three-pitch outing to improve his record in relief to 3-0, Weissert entered in the eighth, giving up a home run that would prove to be the difference in the game. 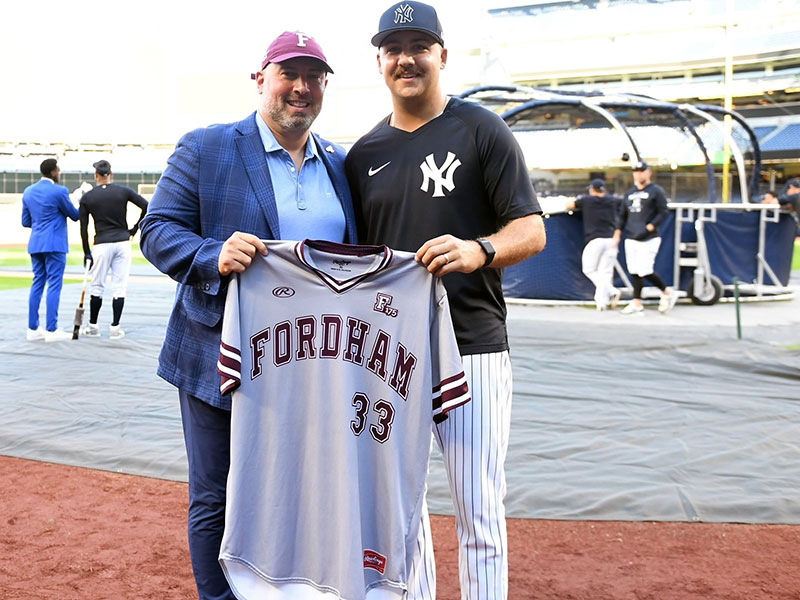 But while the outcome of the game wasn’t what the Yankees fans in the Fordham group were hoping for, the night was about more than the result on the scoreboard.

Steve O’Dowd FCRH ’78, said he and his wife had been planning to come up to the New York area from the Jersey Shore for a wedding the weekend after the game. But when they heard about the alumni outing, they extended their trip (and added a pre-game detour to Arthur Avenue).

“I actually became a Yankees fan starting around the time I went to Fordham,” said O’Dowd. “Prior to that, I was a Mets fan, believe it or not. We’d cut classes and come to a lot of games. Thurman Munson was my hero; that’s why I have this number [15] on my jersey.”

Debbie Myllek, FCRH ’90, another former Mets fan who switched sides upon arriving at Fordham, said her family jumped at the opportunity to bring two generations of alumni to the event.

“We’re Yankee fans and massive Fordham fans,” she said. “My husband and I met at Fordham; I was a sportswriter on The Ram and he was my editor. Now both of our kids go to Fordham. For our friend group, we try to make sure we all sit in the same section, and now my son and his friend started doing the same. It’s really nice.”